‘Problems we have today we had four or five years ago’

Barney Molloy and Bob Ferris are running as the VOTE Party in the Cold Spring election on March 18. Molloy, who briefly entered the village election campaign in 2013, is seeking the mayor’s office, while Ferris, a first-time candidate, is vying for one of two available trustee seats. The Paper recently spoke with the two candidates at the Philipstown.info Main Street office.

Asked why he is running, Molloy pointed to his involvement in village affairs in recent years, including his current role as chair of the Planning Board. “You get to realize where the gaps are — where we need to do better,” he said. “It’s no secret here that the problems we have today we had four or five years ago.”

Ferris echoed that sentiment. “Over the last six to eight months I came to recognize what’s not being done,” he said. “I want to make a difference … I want to work with Barney and the village board — as a strong team. I want to help resolve issues that haven’t been resolved in many years.”

Both feel their experience makes them strong candidates for public office.

Molloy serves as a senior aide for the Westchester County Board of Legislators. “I coordinate the work of several staffers, dealing with the review of the county budget, IMAs [Intermunicipal Agreements] for shared services and water-district issues with local municipalities,” he said. “Dealing with the financial and technical aspects of projects, as well as the need for collaboration, are skills I think I can bring to village government.” 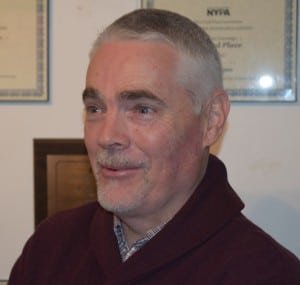 He also cited a combined 20 years of experience in business and financial planning, adding that he has served extensively in both paid and volunteer positions. He highlighted his role as waterfront director for Historic Hudson River Towns, where he handled responsibilities that included grant funding, lobbying senior levels of government and coordinating annual forums and conferences on such topics as “smart growth.”

Molloy’s involvement in Cold Spring’s issues began three years ago when former Mayor Seth Gallagher appointed him to the Zoning Board of Appeals. After the last election, Mayor Ralph Falloon appointed him chair of the Planning Board, a significant post as that body was tasked with moving the often-controversial Butterfield redevelopment project forward.

Commenting on that role Molloy said: “The review of the [Butterfield] project has been comprehensive, fact-based and transparent … I think it’s fair to say that my background and experience contributed in defining that process.” He added that leading the Planning Board has given him a “front-row seat” in monitoring what happens in the village.

Ferris emphasized his experience in law enforcement as solid background for the position of trustee. After serving four years in the U.S. Army Military Police, he joined the Putnam County Sheriff’s Department, where he has been a criminal investigator for 34 years.

“In my profession when I’ve had a job to do, I’ve had to work on it and complete the job to the letter of the law,” he said. Ferris said he has to “do his homework” as an investigator and that time management and research are important aspects of that work. “I have to complete [investigations] based on the facts. The job has to get done, and it can’t take years,” he said.

He has served on the Haldane Safety Committee for eight years, currently as co-chair and in the past as its chair. Ferris was instrumental in having security cameras installed both in the school and on buses. He has also served as dog control officer for the Town of Philipstown for the past 15 years.

The two candidates were asked what they consider to be the key issues that the new Village Board will face over the next term. “It’s not an issue per se. It’s more [about] process,” Molloy said. “The Village Board does not have a way of processing information to make decisions. Whether it’s the dams, the boat club, the firehouse, the riverfront or the sidewalks, we need a process in place.” 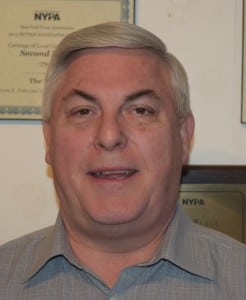 He said the board needs to seek opinions, develop a consensus and determine best practices that can be applied in Cold Spring. “And we need a plan to carry [them] out. The devil’s in the details. That’s the heart of the matter here.”

Molloy referred to the signage ordinance in the Village Code as an example of the current administration’s inability to get things done. “We have not been able to enforce the sign ordinance since it was struck down in 2005. Signs are sprouting up everywhere,” he said. “How hard is that [to fix]? “he asked.

Ferris added that, of the projects his running mate listed, “there isn’t one where there’s light at the end of the tunnel.” He singled out “quality of life” issues as an area that needs to be addressed. “People call a [village] department [for information] and are told not to call again,” Ferris said. “I see it driving through the village. Where are our leaders? Do they not see the garbage cans overflowing on Sunday afternoons?”

Part of the problem, according to Molloy, has been the number of times issues have been dealt with — without resolution. “There has to be some degree of transparency and accountability,” he said, commenting that at times “it feels like Groundhog Day. Didn’t we discuss this six months ago? A year ago? Where’s the results?” He said he has taken photos of code violations, including blocked sidewalks, blocked fire exits and illegal parking scenarios and presented them at the Village Hall. “And the one question from village staff seemed to be ‘Who took these pictures?’”

The two VOTE candidates both see strengths in the other. “Bob is a professional,” Molloy said of Ferris. “He has a methodical, common-sense approach — and he’s results-oriented.” Ferris in turn said of Molloy, “His resume is outstanding … I’ve never seen him at a loss for words regarding the facts. He always has the facts.”

A question prompting discussion on village streets and in local coffee shops is whether Molloy’s relationship with Cold Spring Trustee Cathryn Fadde is an issue that will have to be addressed if he is elected mayor. The two share a house on Stone Street, which would mean, if Molloy is elected, two of the board’s five votes living under one roof. Molloy was very clear in his response. “I don’t really see it as an issue … There’s no problem in state law or in general municipal law — because it’s not an issue.”

Molloy was also asked if his arrest for DWI (driving while intoxicated) a number of years ago is an issue. “My arrest was … about four years ago. I don’t see why it would be an issue. It never came up with the present mayor” — a reference to Falloon having appointed him as chair of the Planning Board.

23 thoughts on “Molloy, Ferris Campaign as a Team”