Former international volunteer Danielle Pack McCarthy, who established a charity for poor children abroad and at home, is running for trustee in Nelsonville in the March 18 elections, seeking to energize the small village and unite its residents in common purpose and action. 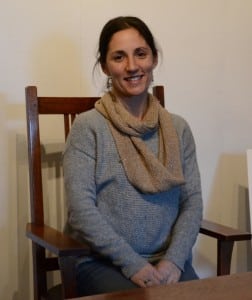 McCarthy, who holds a master’s degree in social work from Columbia University, moved to Nelsonville about seven years ago. Earlier (2003), she founded Denniston International, a nonprofit that aids disadvantaged children through educational projects in the Caribbean (where she served in the Peace Corps) but also has collected toys for Ebola-affected African children and assisted with a Haldane PTA distribution of character-developing books.

She and her husband, Dave, are renovating an old house, while she tends to Denniston International and young sons Trajan, Sawyer and Lincoln. She has also been an adjunct professor at Marist College and Long Island University.

During a Feb. 27 interview with Philipstown.info, she explained that she was campaigning in part because, after settling into Nelsonville, she became aware that “we could do better as a community in terms of getting to know one another,” both in welcoming newcomers and in helping them get acquainted with older-timers, their contributions, and the village itself. “It’s not like I’m looking to shake things up too much, but I think the village could do a better job in engaging residents.”

Those residents then can help the village solve problems and make progress on whatever needs to be done, she said. “People are always willing to step up [but] they need some leadership behind that.”

She said one of her strengths as a social worker is building relationships and nurturing a sense of community. “My three main goals are communication, problem-solving and community-building. I really see a successful community building coming out of those three things,” she said.

She finds that her professional training and role as a mother have made her an acute listener and described herself as “full of energy,” “extremely hard-working” and dedicated. “I think I can take those skills and utilize them in a position as a trustee,” she said. “I think if you are able to work hard, things get done.”

Things to get done, in her estimation, include efforts “to create an identity” for Nelsonville. Pack McCarthy pointed to the small park at the corner of Main and Pearl Streets. It would make a perfect place for gatherings to introduce residents to each other, perhaps in a picnic or similar event, but that hasn’t happened, she said.

Overall, she favors more interaction between village officials and residents. Currently, she said, monthly Village Board meetings draw little attendance and can appear perfunctory; yet residents talk to each other about perceived needs or problems — the condition of streets, snow plowing, village services and more. “So there’s something missing,” she said, and “increasing communication” is crucial.

Ways to do that include inviting people to meetings and saying, “bring your issues; we want to hear from you,” she suggested. In addition, she recommended that the village highlight its businesses more and remind others in Philipstown that Main Street continues from Cold Spring into Nelsonville.

As other topics worth exploring she mentioned “sharing of services with Cold Spring and how that comes into play and that’s best managed” and determining “what can Nelsonville bring to the table” in inter-community projects. She emphasized her view that “Nelsonville is a special place and people can give back to the larger community, too,” not just in Philipstown but in the area beyond. “I think there’s a real talent and real energy,” she said, but, “people need a cause and leadership to jump behind.”

Despite her work through the years in bringing people together, she said she would have no difficulties making decisions as an elected official in disputes, if everyone has been brought together but differences persist and the village government must choose a course and follow through. “I’m ready to do that. I would really look forward to being in a position that I could actually take action on these issues,” she said.

While her nonprofit focuses on children, Pack McCarthy also has experience with those at the other end of the age spectrum. Under the auspices of the Town of Philipstown Recreation Department, she leads an exercise class for senior citizens. Some of them encouraged her to run for office, she said.

In the election, she faces Thomas Robertson, long a member of the community. Their gender difference adds another dimension to the race. If elected, “I’d be the first female trustee Nelsonville has ever had,” Pack McCarthy noted.

Nelsonville’s Village Board consists of a mayor and two trustees.