Regardless, it’s probably here to stay

My garden calendar says that I’m supposed to prune the forsythia right now, but I’d have to dig them out of the snow first. Actually, I’d have to dig a path to get to them and then find the ground somewhere under there. Although forsythia or Forsythia x intermedia blooms on old growth, not new growth, pruning at this time of year has several advantages.

Forsythia won’t bloom, though, if it’s pruned now. This method works best for shrubs that are overgrown, have stopped blooming or just need a refresh. Since forsythia can grow up to 2 feet per year, cutting it back to a few inches from the ground now will give it a major overhaul.

Forsythia is a popular landscape plant in our area. One of the earliest bloomers, in about a month its vibrant yellow flowers will pop out in yard after yard. It’s easy to grow because it forgives nearly everything and will tolerate neglect, poor soil, hot summers and cold winters. It can be used as a hedge or make a decent stand-alone shrub. It can be shaped or left to its own devices.

All the low-maintenance and easy-care advantages aside, I’d guess that it’s planted so frequently mostly because the deer don’t eat it (or haven’t yet in my yard, for what it’s worth). Anything that doesn’t require fencing or constant vigilance with repellent has its own merits.

It does have critics, though. The Native Plant Center lists forsythia with invasive plants and suggests alternatives. Carolyn Summers, who wrote their online guide and the book Designing Gardens With Flora of the American East, said: “Forsythia is considered invasive as it is stoloniferous and extremely difficult to remove (as I can personally attest). Some varieties are sterile, so seeding is not usually the problem; it’s the root systems.” 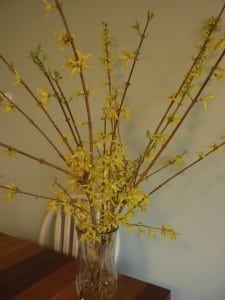 It’s worth trekking through a snowbank to cut a few branches of forsythia for spring color inside right now. (Photo by P. Doan)

Just in case “stoloniferous” isn’t in your garden lingo, it refers to the way that forsythia spreads. When the tip of a branch touches the ground, it can root and start another bush. Strawberries are also stoloniferous and their runners will create new plants.

Summers continued: “Perhaps you’ve noticed that nothing will grow under forsythia? Having said that, I would rather see someone use sterile forsythia than burning bush with berries that go everywhere.” Forsythia doesn’t appear on the U.S. Department of Agriculture’s list of invasive plants, although the characteristics that Summers notes are similar to some other invasive plants. It doesn’t colonize and crowd out native plants like Japanese barberry or Euonymus (burning bush) do. These plants escape from their original site and can spread quickly and easily.

Summers suggests spicebush (Lindera benzoin) and pussy willow (Salix discolor) as native alternatives. Spicebush is usually left alone by deer, but pussy willow is not. Spicebush blooms around the same time that forsythia does and has benefits for wildlife, too.

Kim Eierman, a bee expert and the founder of EcoBeneficial, said: “It is a forage source for some of our early season bees, as well as a host plant for the Eastern tiger swallowtail and the spicebush swallowtail butterflies. In the fall, the plant’s bright red fruits provide a nutritious meal for many birds. Since Spicebush is dioecious (plants are male or female), you need to plant both sexes to get the fruit.” She theorized that native bees don’t use forsythia as a pollen source because it blooms too early and bees co-evolve with native plants for food sources. For honeybees, the shape of the flower is probably prohibitive.

Forsythia varieties originate in China and Southern Europe. It’s actually part of the olive family. The popular foraging site Eat the Weeds suggests eating the blooms but says they can be slightly bitter.

One nice advantage to forsythia — you can force blooming right now for a nice splash of hopeful spring color inside. Cut a few branches and simply stick them in a vase with water. Wait for a couple of days and enjoy a break from winter.