In the opening game, the Lady Blue Devils took on Alexander Hamilton and quickly established a pressing defense and pass-happy offense that took the wind out of the Hamiltonians early and put Haldane up 16-3 by the end of the first quarter. In the second quarter, the Lady Blue Devils’ swarming defense continued to force Hamilton turnovers and feed the Haldane fast break, resulting in a 28-9 lead going into halftime. 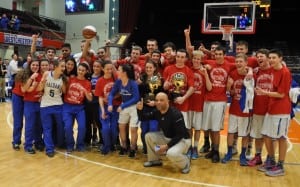 Third-quarter action saw Haldane continue to play championship basketball, shutting down any hope the Hamilton players had of mounting a comeback. The Blue Devils’ nonstop hustle, diving for every loose ball, great passes and clutch free throws made it seem like Haldane was in a tight battle, but they were actually winning by over 25 points. That’s Haldane basketball.

The fourth quarter was more of the same, with Haldane winning by a score of 60-38. Sophomore Missy Lisakatos led the Lady Blue Devils with 18 points, followed by senior and tournament MVP Allie Monteleone with 15 points.

The top-seeded Haldane boys were up next against the underdog Tuckahoe Tigers, who had upset Alexander Hamilton the previous week to reach the finals. The Blue Devils had the size advantage and the talent, but the Tigers were not about to hand over the Gold Ball without a fight. Both teams came out cold, going a couple of minutes before anyone would score a point. With Haldane struggling to find its rhythm, and senior Edmund Fitzgerald picking up his second foul with 4 minutes left in the first quarter, the game got a little more interesting.

The many Haldane fans who showed up to cheer on their Blue Devils were sitting in silence as the Tigers pulled out to a 14-6 lead by the end of the first quarter. Coming out to start the second quarter, Haldane needed to get back into the game, and Peter Hoffmann led the charge, driving inside and hitting free throws; Haldane was tying Tuckahoe with 5:53 left in the second quarter. Haldane would eventually take back the lead and close out the half, leading 22-19.

In the third quarter, Haldane continued to hold the lead, with Tuckahoe staying close by, hitting clutch 3-pointers every time the Blue Devils tried to pull away. Haldane led 39-36 entering the fourth quarter, and the quiet, nervous Haldane crowd was wondering when their top-seeded team would start to tame these Tigers.

But the Blue Devil fans were going to have to wait a few more minutes as the Tigers scored first in the fourth quarter and took a 41-39 lead with 6:45 left in the game. With a sense of urgency, Haldane quickly came back to tie the game at 41-41 with 6:10 remaining and proceeded to take charge of the game in the final minutes. Their towering seniors owning the paint, grabbing critical rebounds and hitting free throws, and their defense stepping up and shutting down the Tigers’ 3-point shooting, Haldane pulled out to a 50-45 lead with under 2 minutes remaining. Sensing victory was within their reach, the Haldane faithful relaxed a bit and cheered their Blue Devils on to a 56-45 victory and their first back-to-back sectional titles in school history.

Next up for both teams are the regionals, scheduled for Tuesday, March 10, at Mount Saint Mary’s College in Newburgh.