Haldane came to Mount Saint Mary’s College in Newburgh on Tuesday evening, March 10, hoping for a sweep in the Class C regional semifinals as the Lady Blue Devils were playing Pine Plains in the opener, and the Haldane boys were playing the nightcap against Chester.

Girls fight to the end

In the opener, Haldane jumped out to a 10-4 lead midway through the first quarter as their speed and tight defense kept the taller Pine Plains team from scoring or establishing any rhythm. The Lady Blue Devils took a 12-8 lead into the second quarter when their offense came alive, with Haldane players driving to the basket and pulling up for jumpers over the towering Pine Plains defense. 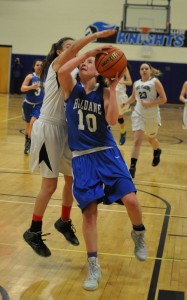 Haldane’s Allie Monteleone drives to the basket in the regional semifinal March 10.

Before you knew it, Haldane’s lead was 21-8 with 5:40 left in the second quarter. Haldane had a chance to pull even further away, but a few costly turnovers led to Pine Plains baskets, and soon the Bombers were back in the game, trailing the Blue Devils by 1 point at 26-25. Haldane headed into halftime with a 28-25 lead.

In the third quarter, Haldane continued to hold the lead, as they did most of the game, but Pine Plains stayed close with some timely defensive stops and clutch 3-point shooting. With Haldane entering the fourth quarter leading 40-34, the Blue Devils turned up the offense and defense and pulled out to a 46-36 lead with 4:40 left to play. Pine Plains was on the ropes and the Blue Devils had a chance to pull away, but the Bombers went on a 10-0 run, knotting the Blue Devils at 46-46 with 2:30 left in the game.

Haldane went up by 2 in the final 90 seconds before Pine Plains came back yet again and tied the game at 50-50. In the final minute of regulation, Pine Plains took the lead on clutch free throws, going up 52-50 with 5.4 seconds left on the clock. Not a lot of time for most folks to cross the street, never mind run the length of the court and make a game-tying, buzzer-beating basket, but that’s exactly what Haldane senior Allie Monteleone did, slicing through the Pine Plains defense with determination and heart, hitting the clutch basket and sending the Haldane faithful into a frenzy.

In overtime the momentum was clearly on the Blue Devils’ side with that buzzer-beater, but soon the momentum would shift as Haldane lost their leading scorer Monteleone to her fifth and final foul with 3:50 left in the overtime session. That did not stop the determined young Blue Devils players, as they continued to battle Pine Plains and led 55-54 with 2:30 left in OT.

As the game wound down in the final minutes, Pine Plains hit some key baskets and free throws to pull ahead 59-58 with 5.4 seconds left in the game. Haldane had one last chance to try and win the game, but the Pine Plains defense denied Haldane and went on to victory, 59-58.

How the following Class C boys regional semifinal game would stack up against that opening OT thriller we would soon find out, as the Haldane boys faced off in a rematch against the Chester Hambletonians, who had beat Haldane 63-62 during the regular season in a last-minute heartbreaker on the Blue Devils’ home court in Cold Spring. With Haldane fans packing the stands, the Blue Devils took the defensive in the first quarter, leading Chester 6-5. 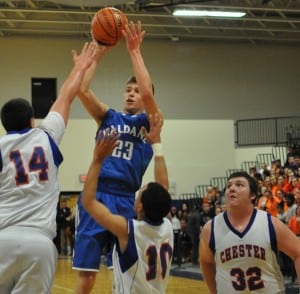 As the second quarter got underway, both teams continued to struggle on offense, with Haldane up 12-8 and 2:45 left in the first half. As the Haldane and Chester fans traded chants, players on both teams battled for every rebound and possession as they knew this was going to be another close contest.

Haldane and Chester entered the half tied at 14-14. At 5:21 in the third quarter, the Blue Devils were up 21-16 but could not pull away from Chester, as both teams continued to struggle to find their offense. Haldane had the lead starting the fourth and final quarter, up 25-23. The determined Hambletonians would make the stop or key basket to keep the Blue Devils close.

With 2:43 left in the game and Haldane clinging to a 35-30 lead, Haldane’s leading scorer Peter Hoffmann picked up his fifth and final foul to the delight of the Chester fans and players. Hope was in the air for the Chester faithful, but not for long. The remaining Haldane players stepped up and continued to play aggressive defense and attack the basket, with Will Zuvic providing a spark off the bench and senior Edmund Fitzgerald hitting clutch free throws to extend the lead in the final seconds. 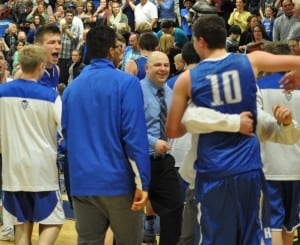 Senior Garrett Quigley sealed the victory with his first career dunk, as Haldane prevailed 44-34 to move onto the regional finals to be held Friday, March 13, at Suffolk Community College on Long Island, where they will face the Stony Brook Bears. Game time starts at 7:30 p.m.

The leading scorer for Haldane was Hoffmann with 19 points.