Butterfield Library proposition on the agenda

Two school budgets and a proposal for funding for the Julia L. Butterfield Memorial Library will be facing Philipstown taxpayer approval in May. At the Haldane Central School District Board of Education meeting on Tuesday, March 10, board members heard from Library Director Gillian Thorpe, herself a former School Board president, and from Superintendent Diana Bowers and Business Manager Anne Dinio about all the financial items that will be brought before voters.

The library-funding presentation only specified that the school district’s attorney and the library’s attorney agree that the library has a legal right under state law to place a proposition on the district’s ballot during the budget referendum. Thorpe didn’t specify what the proposition would entail. The proposition is entirely separate from the school budget and does not impact the property tax rebate. The library needs to present petitions with 25 signatures of eligible voters to be on the ballot, and they will do so at the March 17 meeting. 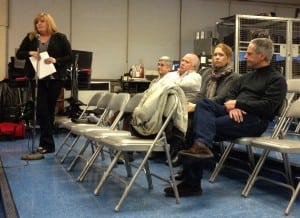 Butterfield library director Gillian Thorpe discusses a proposition that the library wants to include on the district’s ballot.

A follow-up call to Thorpe seeking details about the proposition didn’t produce further information. She said she is only willing to share information in a sit-down joint meeting with The Paper and the Putnam County News and Recorder, which couldn’t be accommodated before The Paper’s deadline. She declined to share the content of the petition.

Bowers and Dinio presented two scenarios for budgets. Budget 1 has enhancements and additions, including two new teaching positions, an additional teaching support person to manage enrollment in kindergarten if necessary, staff development, a new peace officer position and enhanced opportunities for students in co-curricular activities and sports. Budget 2 was described by Bowers as “very close to the amount presently available assuming a minimal amount of state aid.”

The district will not have definite numbers concerning their state aid until the state’s budget is approved. State legislators are scheduled to pass a budget by April 1, but sometimes it does not get done by then.

Budget 2 had four key differences from Budget 1, and each impacted staff positions. Bowers was clear on the district’s priorities — teachers’ skills and expanded opportunities and situations for student learning. Bowers has found savings and ways to reallocate money that the district is spending on services by identifying other ways to achieve the same purpose. For example, the district currently outsources their communications and public relations support to BOCES (Board of Cooperative Educational Services) and will bring those responsibilities in-house.

Board President Joe Curto said, “It sounds like we’re at Budget 2 and could be at Budget 1 depending on some outside forces beyond our control.” Board members requested tweaking some of the language and clarifying some areas but were overall supportive of the proposals and optimistic that they could be achieved.

The tax-increase limit for Haldane is 2.72 percent, and both budget proposals are at that cap. Bowers said, “The taxpayer is not going to pay that additional 2.72 percent because it will be refunded just as it was this year. It makes sense for districts to go for the most they are allowed. The taxpayer will get a rebate from the state for the difference.”

By staying within the tax levy limit, district taxpayers are eligible for the rebate. Bowers said that last year the rebates were relatively small because the district’s limit was 1.09 percent, and that was the refund. It will be higher depending on the calculation. Curto said, “Theoretically, the increase is zero for the taxpayer. You pay it and then you get it back.”

The budget proposals are available on the district’s website. They are scheduled to make final decisions on the budget at their April 14 meeting.

8 thoughts on “Taxpayer Issues Shaping Up for May Vote”