Antony Tseng, a director of the Beacon Volunteer Ambulance Corps, can instantly answer any question you have about the history or the current operations of BVAC. There’s only one question that stumps him.

“How long have I been here?” he repeated, while sitting at a conference table in the BVAC headquarters. “I’ve officially lost count. But I guess I’ll say since 2000.” He leaned over to the speakerphone perched on the table. “How about you, Nick?”

Forty years of service between them, for which neither one of them has been paid a dime.

Tseng and Scarchilli are just two of the 45 volunteers who somehow find the time to put in between 12 and 30 hours a week serving the City of Beacon through BVAC. Although the corps does have 16 paid employees as well, none of its funding comes from taxpayers or municipalities. As the only volunteer ambulance corps in Dutchess County, it funds itself through donations, insurance reimbursements and special events.

BVAC’s major annual fundraiser will take place on Sunday, March 22, at Dutchess Manor on Route 9D. And since Dutchess Manor is generously donating the venue, staff and food, 100 percent of the proceeds will go to supporting BVAC. 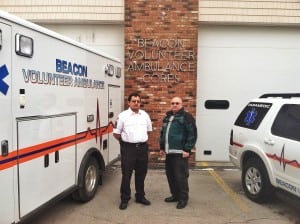 “It’s a chance for people to not only support us, but to talk to us, get to know us and learn how they can join us,” explained Tseng.

The Beacon Volunteer Ambulance Corps has come a long way from its humble beginnings in 1959. Back then, its sole ambulance was a burnt out 1948 Cadillac that had been donated by a car dealership in New Jersey. Its headquarters was the old gas station that used to stand at East Main Street across from the firehouse, where the Dogwood parking lot sits today. And for the first 20 years of their existence, the BVAC wasn’t dialed into the county dispatch system. If the ambulance was needed, someone would have to call a BVAC volunteer at their house.

Today, BVAC is part of the Dutchess County Bureau of Fire dispatch system and responds to over 2,400 calls a year. The old Caddy has been replaced by three state-of-the-art ambulances, two SUVs and a rugged six-wheel utility task vehicle that has scaled Mount Beacon as far as the fire tower and even driven on the Metro-North train tracks to get to an emergency.

Instead of an abandoned gas station, the corps resides in a compound that they built themselves with the help of the Naval Reserve Seabee unit in the late 1970s. Located near the former Highland Hospital, the site is remote enough to warrant frequent visits from deer and groundhogs, but close enough to Route 52 that the corps can quickly reach an emergency no matter where in their 20-square-mile territory it takes place.

Within those 20 square miles are a diverse array of challenging terrains and environments. The BVAC has to be prepared to respond to calls in cities (downtown Beacon), suburbs (Glenham, Dutchess Junction and southern Chelsea), mountains (Mount Beacon and Fishkill Ridge), prisons (the Fishkill Correctional Facility), rivers (the Dutchess County side of the Hudson River from the Beacon-Newburgh Bridge down to the Dutchess-Putnam county line), and even emergencies that take place on Bannerman’s Island.

The infamous and appropriately named Breakneck Ridge Trail also straddles the Dutchess-Putnam county line. When a call from Breakneck comes in, the dispatcher has to geolocate the caller’s cellphone signal to determine which side of the county line it’s coming from, and if BVAC or responders in Putnam County get sent out.

But the biggest change that the corps has undergone in its 56-year history is the ever-increasing level of sophistication in terms of the care that they can provide. In January, BVAC celebrated its five-year anniversary as a certified advanced life support service, an extremely rare designation for a volunteer ambulance corps to achieve.

With that certification comes the ability to use advanced life-saving equipment like a 12-lead electrocardiogram to monitor the heart’s electrical activity, or a constant positive airway pressure system to keep a patient’s airways open. They can run intravenous lines into a patient or place tubes down an unconscious patient’s throat and into their lungs to ensure that they keep breathing.

And so can you

“We provide the training,” said Tseng in response to how community members can join BVAC for themselves. “We don’t send you out there until you’re comfortable.”

Those who are interested have to fill out an application and pass a background check. Once they’re admitted to the corps, they receive training to become CPR and OSHA certified. Additional training is required for those who want to drive the ambulance, and the corps will even sponsor those who want to undergo the full emergency medical technician (EMT) training.

It’s a tough job, but even though the work is unpaid, it has its rewards. For Tseng, who grew up in New York City but didn’t feel “at home” until he moved to Beacon, it’s a chance to give back to the community he loves.

“For every 10 patients that I transport, there’s one that says, ‘Thank you,’ and says it sincerely,” he explained. “That rewards me. That makes me come back.”

2 thoughts on “Beacon Has Dutchess’ Only Volunteer Ambulance Corps”