This week the new Department of Environmental Conservation regulations and prohibitions on the sale and transport of invasive species take effect. Passed last fall, the new rules restrict 69 plants from being sold, bought or transported into the state. An additional six plants are prohibited from being introduced into the wild. 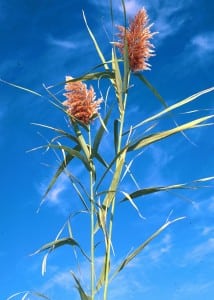 Phragmites are commonly seen in many local marshes and wetlands.

In two columns last fall (“Put Down the Barberry” and “It’s All in the Name”), I wrote about the regulations and offered lists of alternatives to the newly banned and strongly discouraged plants. There are some popular landscape choices on the lists, including Japanese barberry, burning bush, autumn olive and several Asian honeysuckle vines. They are all exotic species not native to this area, and they lack the predators and control factors that keep them in check in their native ecosystems. In our environment, however, each has devastating effects on the native flora and fauna, crowding out native plants and altering the landscape.

Locally, Eric Lind, the director of Constitution Marsh Audubon Center and Sanctuary, has dealt with many invasive species, including phragmites, which is banned from sale by the new regulations. Many marshes and wetlands are being taken over by phragmites. They are the tall reeds with feathery tips that outcompete native reeds and can quickly become a monoculture. According to the New York Invasive Species Clearinghouse, non-native phragmites can “alter habitats by changing marsh hydrology; decreasing salinity in brackish wetlands; changing local topography; increasing fire potential; and outcompeting plants, both above and below ground.”

In Constitution Marsh, Lind said, “We have our choice of exotics, and we have to think carefully about what we can do to prevent degradation of the habitat. We were lucky because it was only in a few isolated patches in the early stages of its progression and we were able to control it and restore the marsh.” Lind’s research showed that phragmites in tidal wetlands led to diminishing bird populations, and it was clear that they could achieve a goal of maintaining habitat for wildlife if they could keep phragmites out of Constitution Marsh. “We took a proactive approach and didn’t control it for the sake of controlling it. We had to use scientific research to know we could make a difference,” said Lind.

In his view, the regulations are necessary and will go a long way toward protecting our native ecosystems. Constitution Marsh is also part of the Lower Hudson Partnership for Regional Invasive Species Management, an umbrella group of organizations and individuals who are working to protect and restore our environment from threats of invasive species. They were involved in advising and shaping the regulations.

Carol Capobianco, director of the Native Plant Center at Westchester Community College, is also part of PRISM and applauds the regulations. Her organization is focused on building awareness and recognition for the role of native plants in the landscape. “From a restoration standpoint, if you remove invasive plants, you need to replant with native plants. I’m hoping that nurseries will replace the banned and regulated plants with native alternatives. It’s an opportunity to expand your palette.” Capobianco cited a 20 percent increase in preorders for their annual plant sale this year as evidence of rising awareness of the important role of native plants in the environment.

Both Lind and Capobianco have favorite plants that they recommend for any home garden or landscape. As is true for many native plant lovers, they prefer plantings that have more than just aesthetic value but also sustain wildlife, birds and pollinators. Lind said: “We have a garden here that’s a little rough but we’ve identified over 40 species of butterflies. Small improvements can make an amazing difference. In the fall, I’ve watched migratory songbirds gobbling these berries.” He mentioned specifically spicebush, winterberry holly, purple coneflower and wild bergamot. Each has berries or flowers that produce nectar for pollinators and seeds for birds.

Capobianco said that she plants on a theme: “Things that are edible by me and by birds.” She favors the paw paw tree, dogwood or Cornus florida, Amelanchiers including shadbush or serviceberry, and low-bush blueberry. Virginia bluebells are one of her favorite perennials.

For more information on invasive species, there are two upcoming events. On March 21, the Cary Institute in Millbrook is hosting a free event, “Invasive Species in the Hudson Valley,” covering the impact and controls for common invaders, and on April 2, the Native Plant Center and DEC are holding a forum, “New York State’s New Invasive Plant Species Regulations: Impacts and How to Adapt.”