As the flaky white stuff fell this winter, so did the levels of cash kept by local municipalities for snow and ice removal. The fallout continues, as highway crews repair roads damaged by the storms.

And when they remove snow, where do they dump it? Alongside roads or in empty lots but not in the Hudson River. Snow is considered stormwater runoff which can contain pollutants.

For snow and ice removal the Town of Philipstown budgeted $120,000 to cover personnel costs, and, according to Highway Superintendent Roger Chirico, that wasn’t enough. “We went over by $8,500,” Chirico said March 13, in an interview at his Highway Department office. He recalled that the bad weather typically began on weekends, which meant more money spent on overtime pay for workers, who were often busy at all hours. “You have to keep going and going and going” to keep up with a heavy snowfall, he said. 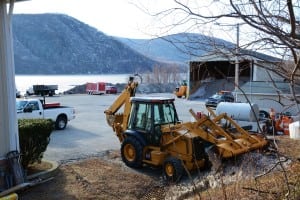 The salt shed, mounds of snow, and equipment at the Cold Spring Village Garage site.

The town similarly earmarked $195,000 for snow and ice control supplies and additional equipment but spent about $211,000, Chirico went on. “It’s hard to estimate what kind of winter we’re going to have” and how much will be required, he said. He purchased 2,456 tons of salt, whose price rose recently, and used about 500 tons more salt this year than last.

“Because of the price escalation, that put us in the hole,” Chirico said, also noting that he tried using more sand and less salt — a practice the Town Board discussed with him last fall, expressing concern about the environmental effects of salt.

In clearing roads, Chirico said his crews pushed the snow onto the verges, although they can also pile it at the town’s old landfill, off Lane Gate Road, or, in some cases, dump it at an agreed-upon Town of Cortlandt site.

Village Clerk Mary Saari said Monday (March 16) that Cold Spring gets free salt and sand from Putnam County because it gives the county storage space at the village Highway Garage on Fair Street. Village Accountant Ellen Mageean reported that the village allocated $12,000 for snow and ice removal and spent $18,848.72. That’s more than 1.5 times as much as expected. But it won’t be a budget-breaker, Mageean said, because the village can move money from other highway budget lines to cover the excess.

Nelsonville Mayor Tom Corless said at the Nelsonville Village Board meeting Monday night (March 16) that Nelsonville spent $3,482.88 on road salt and that the operational costs of removal were covered by an ongoing contract for such work. Like Philipstown, Nelsonville saw its salt expenses increase over recent years: It spent about $2,400 for the winter of December 2013–March 2014 and $1,268 for January–March 2013, Corless said.

Village Clerk Pauline Minners said Tuesday (March 17) that removal crews shoved the snow to the side of the street and did not truck it elsewhere. She noted that New York State crews cleared snow from Nelsonville’s portion of Main Street, Route 301, a state highway, and carted it off.

New York State has two other state highways — Route 9D (Morris Avenue–Chestnut Street in Cold Spring) and Route 9, plus the Cold Spring section of 301, in Philipstown. However, Putnam County handles snow removal for the state on 9D from its intersection with Main Street at the traffic light in Cold Spring to Beacon and on Route 301 from its start at the 1814 Courthouse in Carmel to Cold Spring, about 20 miles to the west. 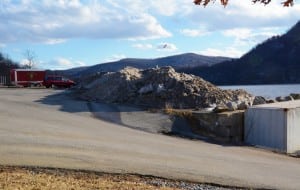 Dirty snow piles up at the edge of the Cold Spring Village Garage site on Fair Street.

Responding to a query from The Paper, state Department of Transportation staff members said the state does not break down its regional expenses in enough detail to provide costs on specific roads. And the expenses could continue, the calendar date notwithstanding.

“The snow and ice season is not over yet!” Beau Duffy, state Department of Transportation communications director, pointed out Wednesday (March 18). A request on Tuesday to Putnam County for information on its snow removal costs in Philipstown did not produce a response.

Chirico said repairs to roads that suffered this winter continue. He described fixing dirt roads as the biggest burden and expense because dirt roads do not hold up as well as paved roads. Costs accrue not only for restoring the road surfaces — “you lose the crown on a dirt road” in plowing — but because of wear and tear to his equipment, he said. “We’ve had broken frames, you name it.”

Frost penetrates about 2.5 feet into dirt roads, but “it doesn’t get as deep under a paved road,” he said. Complicating matters, “now the thaw is the issue. The thaw out there is terrible,” producing mud and gashing and gouging the surface, he said. “The heaves on them you wouldn’t believe,” he said. He predicted that every unpaved road will need attention.

As of March 13, when he had two bulldozers, three backhoes and two graders out on the job, dirt roads were “passable” and accessible to emergency vehicles, such as fire engines, as well as cars, Chirico said.

Moreover, “dirt roads take chemicals 12 months a year,” including the mixture used to wet them in summer for dust control, he stated. Nor can he use Philipstown’s share of about $104,000 annually in Consolidated Highway Improvement Program (CHIPS) funds, distributed by the state, for ongoing repairs to dirt roads, he said. However, he observed, he could use CHIPS for long-term upgrades — like paving dirt roads.

One thought on “As Snow Fell, So Did Municipal Cash for Removal”