Haldane basketball took a road trip to Suffolk County Community College located in Selden, Long Island, last Friday, March 13, to take on the Stony Brook Bears in the Class C regional finals. The 70-plus Blue Devils faithful who made the 2 ½ hour trek to Long Island to root for their team, as well other fans watching via streaming Internet feed, knew that they were in for a special night after the opening tipoff.

Haldane guards Tucker Beachek (7 points) and Ryan McCollum (10 points) immediately attacked the Stony Brook defense with determined drives to the basket that helped give Haldane an early 8-0 lead they would never surrender. The Stony Brook Bears, as well as their fans, were stunned and could not recover. The start of this game was the equivalent to boxer Mike Tyson in his early days, running out from his corner at the opening bell and hitting his opponent as quickly and as hard as he could. Tyson in his prime was unstoppable. 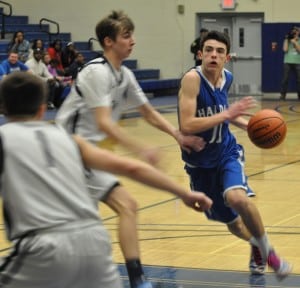 Blue Devils’ point guard Tucker Beachek drives to the hoop in the opening minutes of Haldane’s victory over the Stony Brook Bears March 13.

Haldane boys basketball, when clicking on all cylinders, is similarly unstoppable. The Blue Devils have a shutdown defense that takes out the best scorers on every team. That’s their game: Shut down the opponents with in-your-face defense and score some baskets. So when Beachek and McCollum attacked at the start of the game, clearly it was going to be a good night for the Haldane Blue Devils and their fans, even though this was no easy task, since the Stony Brook Bears had some size and sharp shooters on their team. But Haldane didn’t wait to see them get started; they went for it at the opening bell, just like Tyson would.

When senior Garrett Quigley went down with an ankle injury with 3:30 left in the first quarter and Haldane leading 11-0, the up-tempo game that Haldane was playing suddenly came to a stop. As Quigley was being attended to, a few fans wondered if the flow Haldane had established would stall, and maybe the Bears just caught a break with that extended injury timeout.

But the Blue Devils would not lose the focus and continued to play their hearts out for their fallen senior. Will Zuvic replaced Quigley, and Haldane continued its assault on the Bears. Haldane had a first quarter lead of 13-0 before the Bears scored their only basket with 3 seconds left in the quarter, trailing Haldane 13-2.

Haldane continued to attack on offense and defense in the second quarter. Haldane came out scoring, building the lead to 20-4 before a relatively quiet mass of over 200 Stony Brook fans. The smaller but loud and proud group of Haldane fans continued to cheer their team on with every defensive stop and offensive basket.

With the Blue Devils leading 22-4 and 1:45 left in the half, the Stony Brook Bears needed a little offense run to get back in the game, so they attempted to attack on offense, setting up their shooters, only to have Haldane players and their long arms standing between them and the hoop. The Bears did manage a 5-0 run in the final minute of the half but were stopped short on their next possession by a determined Haldane defense, entering the half trailing the Blue Devils 22-9. 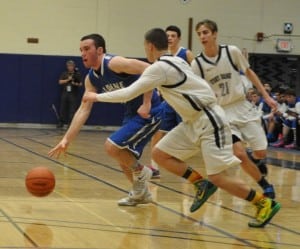 Moving onto the third, these Blue Devils were not done yet. They continued to pour on the offense, going on a 7-0 run before the Bears would score their next basket with 3:53 remaining in the third, cutting the Haldane lead to 29-11. Junior forward Zuvic (8 points) wanted those points back and quickly found an opening in the Bears’ defense for an easy layup to put Haldane up 31-11. Haldane would not score again in the final 3:40 of the third quarter as the Stony Brook defense was pressing and desperately trying to turn the game around, but their defense did not let up, limiting the Bears to 3 points in the third quarter. Haldane entered the fourth leading the Bears 31-12.

That’s when things got a little interesting. Did someone say it was Friday the 13th? The Bears’ offense came out of hibernation and started to hit some baskets. Haldane, up by 20, didn’t panic, but their shots weren’t falling and the Stony Brook defense started to press. With every basket that the Bears made, their fans started to roar a bit louder, and the Bears players’ confidence started to grow. Haldane fans, delirious from an awesome three quarters of Blue Devil dominance, were now wondering what was going on: We should be closing the door, not opening it. 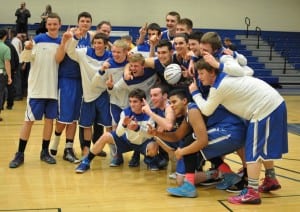 The Bears continued to press Haldane on defense and make them work for every possession, pass and basket. Soon the Haldane 20-point lead was in single digits, but the clock was also running out on the Bears’ season, and Haldane knew that their defense would win the game, and they did, holding off the Bears to end 39-32. The Haldane fans and players celebrated the win courtside and then packed up for the long happy ride back home to Cold Spring.

The leading scorers for Haldane were McCollum, followed by Zuvic and Edmund Fitzgerald with 8 points.

Haldane will now head north to the New York State Class C Final Four, to be held on March 20 at the Glens Falls Civic Center in Glens Falls. The Blue Devils will play Lake George in the semifinal game starting at 5 p.m. The Haldane faithful will be making the journey once again to cheer their champions on to victory and help Haldane bring home the Class C title. Go Blue!