Sarah Womer, founder of the education-based waste management company Zero to Go, has been trying to bring curbside composting to the City of Beacon for years. Now she’s about to roll out the first phase of an ambitious new project to make composting as accepted and commonplace in Beacon as curbside recycling.

By mid-April, a select group of Beaconites will have their food scraps picked up once a week via cargo bike to be turned into compost, the nutrient-rich organic matter that farmers and gardeners alike refer to as “black gold” for the way it miraculously improves soil health.

Womer is currently accepting applications to take part in the pilot program at zerotogo.org, with two town hall meetings at the Howland Cultural Center at 477 Main St. in Beacon to discuss the program further and answer questions. The first meeting was slated for Thursday (March 19), and the second meeting will be on Saturday (March 21), from 11 a.m. to 12:30 p.m. 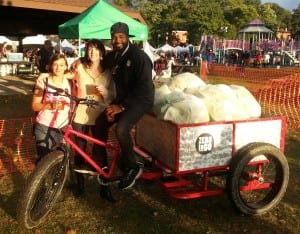 Zero to Go’s Sarah Womer, left, and Ali T. Muhammad, right, catch up with a friend while collecting compostable materials at the Hudson Hop & Harvest Festival in Peekskill in October 2014.

According to a report from Mid Atlantic Solid Waste Consultants, 291,000 tons of municipal solid waste is produced in Dutchess County each year. The EPA estimates that approximately 116,000 tons of that waste is compostable, but instead of being recycled and converted into compost in order to benefit the county’s agricultural health, it’s either hauled five hours away to a landfill or taken to an incinerator in Poughkeepsie with the rest of the county’s trash. Both the landfills and the incinerator produce an enormous amount of methane, the greenhouse gas that’s 20 times more potent than carbon dioxide.

Add in the fuel that it takes to haul waste to landfills and the natural gas injected into the incinerator to make the fires burn hotter, and the county is spending a hefty sum and causing great environmental harm to dispose of something that farmers are willing to pay money to get their hands on.

“People don’t really understand what’s going on with waste in Dutchess County,” said Womer. “I do, because I was curious and I wanted to figure it out.” And once she figured it out, she drew up a three-phase plan to do something about it.

Under the first phase of the program, 30 homes and four businesses will be issued industrial-grade compost keepers. The home version contains a six-gallon compostable bag and a carbon filter to make sure that food odors stay inside the bin. Womer has been road-testing hers for over a month now, dumping fish in it, and can verify that the bins are indeed odor free.

“These are serious containers,” Womer said. “I’m not messing around with cheap stuff and I don’t want any chance of restaurants being unhappy with odors.”

Once a week, bin owners simply pull out the bag, tie it up and put the bag in a special five-gallon bucket that Zero to Go will also be providing. The bucket then gets placed outside on the curb or porch. At that point, Womer or someone else from Zero to Go rides by one of the company’s custom-built electric-assisted cargo bikes, pulls out the bag, throws it in the back of the bike and pedals off.

After all of the week’s compost is collected, a hauler from the Albany-based compost management company Empire Zero will pick up the city’s compost and deliver it to farms and compost processing centers throughout the Mid-Hudson Valley. So the carrot top you dump into the compost bin this year could help to grow a carrot that you eat next year. 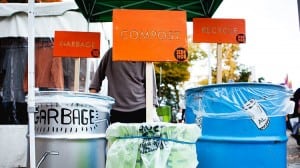 The initial monthly cost of taking part in the program will be $40 for homes and $105 for restaurants, although those who take part in the program’s first phase will receive the compost keepers and buckets for free. Womer is expecting the costs to come down once the program ramps up in Phase II. By then, Womer will have collected and analyzed two months’ worth of data, worked out any problems that have arisen, and be ready to accept another 20 homes and six more restaurants.

At first, those taking part in the program won’t have access to the finished compost itself. That might make the program less attractive to Beacon’s current crop of backyard composters who are churning out small batches of compost for their own personal use, but Womer isn’t worried about that. To her, those people are already part of the solution.

“I don’t want to tell people that are already composting that they have to stop what they’re doing and work with me now,” she said. “I want those people to tell their friends and their neighbors that they’re doing it and then get them to do it. I want to build compost culture here in Beacon.”

Building compost culture is what Phase III is all about.

By 2016, Womer hopes to be able to purchase a $100,000, 1,000-square-foot in-vessel composter capable of accepting up to a quarter ton of food waste a day. The composter would become a permanent piece of local infrastructure, turning food waste into compost right here in Beacon for the environmental and economic benefit of the entire city. There are currently only two other industrial compost processing centers in the Mid-Hudson Valley. Zero to Go is hoping to make Beacon the third.

“Beacon could be sitting on a gold mine here,” Womer said. “I’m not sure exactly how I want to partner with the city yet, but I’m not going to sit around and wait anymore. The timing is right.”

Photos courtesy of Zero to Go