Cold Spring–raised jewelry and textile designer launches her own line

Micah Parker did all the things that Philipstown children who lean toward the visual arts tend to do: She attended Garrison Art Center summer programs and was Mrs. (Jean) Cendali’s “art helper” during her years at Haldane. During high school, she worked at the Heaven and Earth boutique, then on Cold Spring’s Main Street, where the owner, Terah Cox, began selling some of the jewelry Parker made on her own at home. “It stuck with me that I could make things that sold,” she recalled. 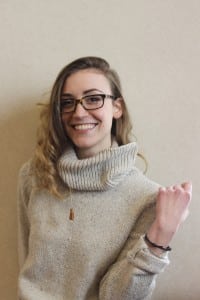 Designer Micah Parker, wearing some of her wares (Photo by A. Rooney)

After graduating, she migrated south to the city to study fashion design at Parsons, where a professor set her straight, saying, “This is not right for you.”

Rather than seeing this is a setback, Parker readjusted. “He was right,” she said. “I switched to illustration and sculpture.” She later transferred to a joint liberal arts/conservatory program with Tufts and the Museum of Fine Arts, Boston, studying illustration, ceramics and graphic design. She began her career as a children’s book illustrator, teaching art on the side.

Throughout all of these art iterations, at home she continued to create jewelry, something she has done continuously since childhood. “Even though I loved illustration, I missed working with my hands,” Park said. After a short stretch staying on in Boston after college, Parker returned to New York, first to the city and then, wanting more space both in and out of doors, coming back to the Hudson Valley.

With the advent of Etsy and the culture of the handcrafted, Parker revisited her avocation. “So many people want to buy something from someone directly, knowing what it’s made out of and why it is made,” she said.

Now as a young adult, along with teaching and the other miscellaneous things artists are prone to do, Parker has melded her training and her passions. After years of making gifts for her friends, which led to requests for more of these items for purchase, she has started her own line, Fox & Castle, which launched last fall and specializes in handcrafted artisan jewelry, textiles and housewares currently made in a Cold Spring studio. 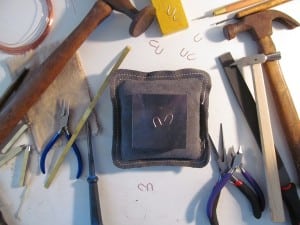 Much thought goes into each object or design she produces. “There needs to be a story … I’m fascinated by any kind of traditional craft-making, and I incorporate skills I’ve mastered to go into my final products.”

Fox & Castle’s line includes jewelry, along with block-printed textiles, including cloths and sachets filled with potpourri made from elements Parker has foraged in the woods.

Lingering behind her work, philosophically, is Parker’s Cherokee heritage. “My dad was Cherokee. I’ve never been raised in a directly Cherokee way, and I have a problem with cultural appropriation so I would never take a Native American theme approach — like I would never, for example, use a Navajo print or make a dream catcher; it can be a tough line to cross — but I try to stay true to the ideal of not wasting anything.” 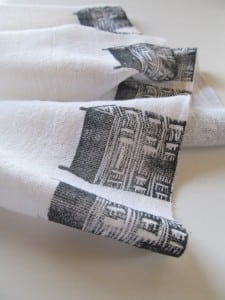 This aim to never waste any element shows in Parker’s tassel necklaces, for example, which are made from the fringes of the European-milled linens she uses. Her “Northern Lights” bracelets feature polymer stones on deerskin, the stone a byproduct of the metal industry mixed with a powder made from brass and copper, and the deerskin never used from animals killed solely for harvesting leather. Little baskets turned into necklaces are composed of scraps, fashioned into tiny works of art. Her block printing begins with her own carving out of designs from linoleum.

It’s all quite time-consuming. “It takes me a long time to release a new product. I eat a lot of my own money. Although the time is definitely worked into the pricing, there is more time behind that, learning the skills, which of course I can’t weave into my prices. That’s why I also teach and do events and take on other work, which allows me to support this. I need to buy supplies and mess up. But the mess-ups are why what I begin with often turns into other things,” Parker explained.

She’s not in a rush. “I’m still developing,” she acknowledged. “In fact it’s all developing faster than I thought it would; I’m really happy at the rate it’s going. Before releasing the line, it took five years to get to the point where I felt I could. When that happened, I bought a domain name and thought, ‘Let’s just do it.’” 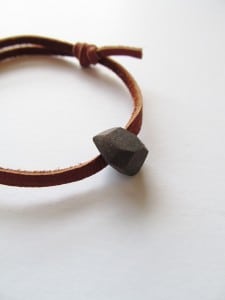 As for the name, Fox & Castle was chosen, Parker said, “because it’s related to nature and also to something else: the grounded, structural, world. Two opposite things which are simple, revealing things, yet are not associated with any one thing.”

Right now Parker is selling largely online, through the contemporary marketplaces of sites such as Instagram. She also sells at some shows, including the WORK: SHOP Holiday Salon in Beacon last December. Asked to define her work, Parker reflected, “Simple, small things, understated but not basic looking; always with a bit of interest, complementing your own beauty or style.” Visit foxandcastle.net to see the full collection.