From love to money, any number of agitators can disrupt life, and occasionally, life bubbles over in the kitchen. Some households claim a member who consistently burns the toast or shirks doing dishes. It wasn’t dirty dishes that rattled our harmony, but herbs and spices.

Sugar and spice have long conjured images of everything nice, while herbs turn out favorable buzz for taste, color and health benefits.

Why the fuss? I was prepping dinner for a small party and came up short on cilantro. My husband offered to pick up a bunch and he was soon out the door and on his way to the market.

Cilantro or coriander, Coriandrum sativum, is widely used in the Middle Eastern kitchen. We lived in the Middle East at that time, in a neighborhood with its own small food co-op stocked with essentials. Before long, Greg returned from the co-op with an enormous bright green bunch — of parsley.

Little in the produce section was labeled, and if the herbs had been identified they would have been marked in Arabic. No problem for those with a grasp of food group vocabulary, but his was yet to develop. Even though the pungent herb cilantro belongs to the parsley family (Apiaceae), it reserves its own taste and aroma, and my initial reaction lacked any sort of sympathetic herbal understanding.

“Did you notice the difference in the shape of the leaves?” I asked. “How about the scent? Did you sniff it?”

If the story ended there, we would have settled on one of many uses for the parsley. But the same herb mix-up happened again, at least two or three more times. Purchasing cilantro went on to haunt us. 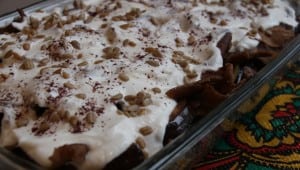 Use crumbled flatbread, eggplant and yogurt for this adaptation of fatta.

We weeded our way through the herb confusion, only to enter a new chapter tense on spices. At a women’s-only gathering where food pageantry was secondary to warm hospitality and engaging discussion with family and friends, a dish made with eggplant and crumbled bread called fatta (fatteh, fatha, or any number of ways to spell it to match the varied ways to prepare it) outshone its competition.

Though it was served with platter after platter of colorful selections incorporating grains, vegetables and lamb, I wanted to limit myself to a spoonful of everything else to dedicate room for an indulgent tasting of the fatta (local custom shunned eating lightly). The hostess accepted compliments and insisted on second and third servings with no resistance from the dozen guests at the table.

Closely associated (by marriage) with the royals, she described her family’s preparation instructions. She didn’t exactly have hands-on experience making the dish but knew expressly all ingredients (and quantities) required.

The ingredients soon made their way to my shopping list, but one proved difficult to find. Greg and I shopped everywhere looking for suma’, as one of my friends wrote down for me in Arabic script. We passed up a perfect selection of sumac — which a spice vendor in Cairo’s Khan el-Khalili market insisted was what we needed. Greg wanted to close the spice deal — but I resisted.

Finally, back in the Gulf, my neighbor shared a package of assorted spices. One of them matched that ground reddish-purple spice I hesitated to purchase and turned out to be a petite pouch of sumac which she and other locals pronounced suma’. 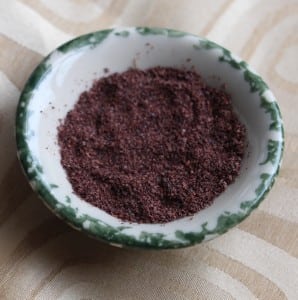 Sprinkle sumac on fatta to finish the dish.

Regrets and forgiveness ensued, and we finally made fatta finished with sumac (Rhus coriaria, ground from the dried berries of a Mediterranean shrub). Fatta, loosely translated, refers to a dish of crumbled bread, and for this regional adaptation from the Gulf, it calls for a traditional flatbread.

Bake your own flatbread, purchase it at a Middle Eastern restaurant or bakery, or substitute commercial pita bread, no pocket required. Tina’s Basket in Cornwall offers white and wheat traditional flatbread. Consider day-old bread as an ingredient as it’s destined for crumbling.

Remove stem and thinly slice eggplant no more than 1/8-inch thick. Sauté in oil. Remove from pan and set aside in warm oven. Fry flatbread on both sides until crunchy. Cool 2 minutes on paper towels, crumble bread into small pieces and set aside. (To avoid oil, toast bread 5 minutes in oven at 400 degrees or toss it on a grill for a few minutes.)

Cook chopped onion, ½ teaspoon salt, a twist of ground pepper and the meat until it is browned through. If the meat is high in fat, drain excess.