What is the future of The New York Times (NYT) news organization in a digital world spinning out new changes every day? The question resonates not only because the future status of one of the preeminent international sources of journalism is in doubt, but also because its situation reflects the wider and deeper issue of the role of journalism in a world of constantly evolving portals of information on an array of devices.

On Sunday, March 22, a panel of people in a position to know a great deal about the subject assembled at Winter Hill in Garrison to consider the past and future of the NYT and the implications for journalism in general. The occasion was also a fundraiser for Philipstown.info, which now operates under the aegis of a nonprofit board of directors. The event drew more than 80 people. 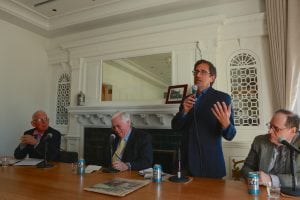 Norris and Elliott accepted NYT buyouts last December. Revkin was in the buyout class of 2009 and now writes for the NYT opinion section at Dotearth under an independent contract.

Underneath their perspectives on the NYT as an organization faced with great challenges lay an enormous reserve of regard for their own association and what it has meant for themselves and journalism. “It’s more than a job, it’s really your life,” said Revkin. Norris described the NYT at one point “in my highly biased opinion” as “unequalled.”

Elliott explained that the origins of objective, balanced journalism arose in the late 19th century from the needs of new national retail stores and other national consumer companies for advertising vehicles that did not represent agendas of political parties, which were the owners of newspapers in the past. Under this model, urban-based newspapers for a century became highly profitable, near monopolies in their communities.

By the late 1990s the NYT, even with the multi-paper competition in New York City, was a successful, moneyed news-gathering machine funded chiefly by print advertising revenue that filled editions that on Sunday could run in the hundreds of pages. Revkin recalled the billion-dollar candy bar the NYT created to celebrate a milestone company valuation. “In 1999–2000 they were just minting money and spending it in wonderful ways,” said Norris.

They all agreed that no hint of the trouble ahead influenced company deliberations, such as the decision to build a grand new office building to house operations across from the Port Authority bus terminal in Manhattan.

“There is on Wall Street a common saying, if the company is building a new headquarters, short it [bet the stock will go down]. Did I sell my NYT stock? No, I did not!” Norris said. “Neither did I,” added Elliott to audience laughter.

Despite how hard the digital revolution hit the printed NYT, Norris believes “they are making progress now. It’s read by more people than ever before and by orders of magnitude greater than 20 years ago.” Norris acknowledged that the challenge is monetizing the rising demand for the NYT product over time to replace lost ad revenue from a shrinking print edition. He pointed out that far more people now come to the NYT website from other originating sources such as Facebook. 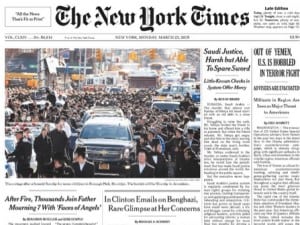 He said news content had an advantage over the music recording business (which has suffered enormous losses from digital transformation), given that the news is different every day as opposed to songs, which hang around on Top 40 lists for weeks.

But Norris also ruefully referenced the airline industry, which he said had grown steadily in consumer demand throughout his lifetime but has never really achieved profitability.

To handle rapidly evolving consumer choices, the NYT is hiring more young people with social media skills over traditional news reporting training. Elliott commented that some of this came at the cost of eliminating news coverage by experienced journalists, such as the advertising column he and others penned over an 80-year history.

Disruption as they spoke

Underlining the disruptive nature of social media, the NYT reported Monday, March 23, that the Times was in discussion with Facebook about having NYT news content placed directly on the Facebook page rather than linking to the NYT website. Seems linking takes too long for the increasing number of readers who use their smartphones to access news. Under a possible plan, Facebook and the NYT would share ad revenue. The story said other news organizations were considering the same arrangement, creating competitive pressure all around.

“In disruption, the incumbent is at a disadvantage for fear of losing customers,” said Norris, as if anticipating the next day’s story.

“Quality journalism is going to prevail. No one heard Barack Obama was elected from the NYT … but we sold a zillion copies the next day because people wanted analysis and understanding,” said Norris, the most sanguine about the future of the Times among a worried trio.

“I am not confident the NYT can innovate to keep pace to sustain the business,” said a skeptical Revkin. He concurred with Norris that investigative and analytic journalism will be at the core of any NYT success.

For Elliott, future media operations including the NYT will have to become less parochial. He noted that the more innovative media will send readers to other sites to better appreciate a story — a solution, of course, fraught with the risk of losing readership as much as gaining it.

Asked about the prospects for journalism students today, Elliott pointed out that they are often lured to ad agencies, public relations firms and other consumer product companies, which have their own “news desks.”

“Journalism used to be more of a calling than a career. Now the temptations to do other things is greater than ever,” he said.

“Anyone can scan a piece of paper at home and make it available to everyone in the world in 30 minutes,” said Norris in a discussion about how news is generated and by whom, within the expanding digital landscape.

Everyone agreed the current pace of change is astounding and the consequences of decisions largely unknowable. “It’s a Gutenberg-like moment,” said Revkin (referring to the inventor of the printing press). “Change comes in big doses and then it changes little,” offered Norris. “Young people will see it slow down,” he added.

“It’s an exciting and terrifying time,” said Elliott. “There isn’t a single media company out there … that has secured its future.