As their March 31 electoral rematch neared, Nelsonville candidates Danielle Pack McCarthy and Thomas Robertson (listed alphabetically) addressed questions of finances and government streamlining, the village’s lack of a sewer system, and the challenges they anticipate, while also urging voters to return to the polls next Tuesday, when one or the other — assuming no new tie occurs — should claim victory as the newest trustee on Nelsonville’s three-person Village Board.

In their initial go-round March 18, Robertson and Pack McCarthy tied, with 90 votes each. In all, 184 Nelsonville citizens, or half of the 367 registered voters, cast ballots that day. The two contenders expressed hopes for equal interest next time around.

Once again, voting will take place in the meeting chamber at the Village Hall complex, 285 Main St., from noon to 9 p.m. 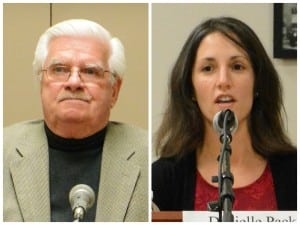 Robertson had suggested a coin toss to settle the matter, while Pack McCarthy opted for another election, and he said this week that “I respect her choice and gladly agreed to a revote.”

In email interviews with The Paper, the two on Tuesday and Wednesday (March 24–25) answered questions on issues and described their tie in positive terms as a demonstration of strong interest in the election and the importance of a single vote. On that point, The Paper asked each a basic question:

Pack McCarthy: “Because their vote matters! One thing that became abundantly clear during the original election for trustee is the power of one single vote. I firmly believe that the March 31st runoff election gives Nelsonville voters the chance to determine its future over the next two years. During the course of this campaign, I have met so many people who want to be part of something larger — to create a community in Nelsonville that looks out for one another and a Board of Trustees that represents all residents. I am doing this so that ALL the residents of Nelsonville feel that their voices are heard and that they have a say in how things run in our village.” She also observed that the election gives voters a chance to put a woman on the Nelsonville board for the first time.

Robertson: “I am thankful to for the 90 residents that supported me and hope they come out again! I have had many people tell me how sorry they [are they] didn’t get to vote for me the first time and that they are thankful for the opportunity to do so on the 31st, and I am sure Danielle Pack McCarthy had experienced the same from her supporters. The fact of the matter is we had a great turnout and obviously the community supports both candidates. I see it as a win-win; either way, Nelsonville will wind up with a trustee that cares about our community, and isn’t that really the goal?”

The other questions from The Paper, and their answers, follow.

What are the three most pressing issues facing Nelsonville?

Pack McCarthy: “An area that deserves considerable concentration is the drug crisis in our county. I sit on the Putnam County Communities That Care Coalition, which looks at ways in which our community can come together to combat substance abuse among our youth. In addition, [in my] walking the streets of Nelsonville and talking with residents, the issues of sewers and consolidation also come up often. Since the beginning of this campaign, I have stayed true to my platform that the three major areas where Nelsonville can improve are (1) communication, (2) problem-solving and (3) community building. Whether the issue is sewers or aging infrastructure, by getting to know one another more residents become more vested in their community and solutions to problems become a group effort.”

Robertson: “Finances: Nelsonville is doing a lot on very little and we need the residents to become involved, support and understand the decisions made by our elected officials.

“NYS [New York State] Mandates: There are many unknowns regarding what changes NYS will force on its municipalities. We need to be prepared for any possibility. I know there will be pressures, and whether in, or out of office as a resident, I will make sure that I fully understand line by line what the state is seeking. We certainly plan to maintain our independence.

“Protection: I want to protect our natural surroundings, preserve our traditions, and that we continue to grow while keeping our small village atmosphere.”

Given the nearness of houses/buildings to one another, should Nelsonville continue to exist without a sewer system and rely on septic systems or backyard cesspools?

Pack McCarthy: “While researching this area, I contacted both Cold Spring and Nelsonville village officials for their insight and historical perspective. The good news is that, should Nelsonville secure funding in the future to tie into the Cold Spring sewage system, the Cold Spring Wastewater Treatment facility already has the capacity to handle the additional Nelsonville households. Of course, so many factors would need to be considered, including cost to our residents. This issue is a large one and would require extensive research and most importantly, a public referendum so that residents get the final say on such an initiative.”

Robertson: “I am not an expert in sewer systems, but I do know that the county constantly monitors and is available to assist, if indeed we needed their services. I have been around some 45-plus years, and the septic systems work well. Certainly I am open to discuss sewers being extended into the village.”

New York State is demanding villages and towns provide information on what they will do to consolidate or share services and streamline. What should Nelsonville do?

Pack McCarthy: “Nelsonville has the unique opportunity to consolidate our court services with the Town of Philipstown. There is no need for three courts to run down Main Street over the course of less than a mile. By combining services and utilizing the town’s courtroom, Nelsonville would save the cost of a judge’s salary as well as the operating costs associated with the courtroom. This does not mean we lose out on the revenue created by fines levied in our town. Those should continue to come to us. We should just lower the costs associated with running the court itself.”

Robertson: [Robertson did not specifically answer this question, but mentioned finances and related concerns in his other answers.]