Music may have charms to soothe the savage breast, to borrow a line from William Congreve, but poetry brings pleasure to Philipstown. See for yourself when the second annual “One Poem a Day Won’t Kill You” project launches on Philipstown.info April 1. To celebrate April as National Poetry Month, the site will feature a new video reading each day, demonstrating how a profound or clever verse can both instruct and delight. (Click here to listen to the 2014 readings.) 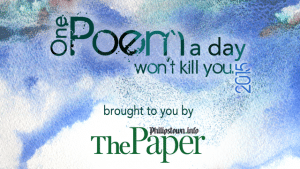 More than 20 residents have already gotten into the act. Local poets Tahitia Foggie (Cold Spring), Jake Holmes (Beacon) and Jo Pitkin (Nelsonville) have offered their own work, while other community members have shared poems by authors ranging from Rumi, the 13th-century Persian, to Emily Dickinson, Ogden Nash and Allen Ginsberg.

The idea for the project originated with The Paper’s layout editor, Kate Vikstrom, who loved an audio version on KRBD, the public radio station in her former hometown, Ketchikan, Alaska. Vikstrom correctly thought that Philipstown.info would be a great platform for a video adaptation, and her Ketchikan contacts were happy to see the idea expand.

“One Poem a Day” produces most of its recordings on an iPhone in the Philipstown.info office, with an occasional on-location shoot at places such as the Country Goose, a sponsor of this year’s program along with the Garrison Arts Center. Goose proprietor Leanora Burton’s offering this year features a verse by William Henry Davies, a popular Welsh poet of the early 20th century, honoring the increasingly rare joys of leisure time.

Videographer Greg Gunder spruces up the production quality a little before setting the videos up to be posted. The daily email blast from Philipstown.info broadcasts a teaser and a link for the new poem of the day, which joins those that have come before it.

Indeed, “One Poem a Day” has killed no one; on the contrary, it has made many people happy. As Haldane student Noah Bingham reads this year from Walt Whitman’s poem “Oh Me! Oh Life!” there is some good in knowing “That the powerful play goes on, and you may contribute a verse.”

If you would like to offer a poem, write to [email protected], and we will let you know if any openings remain.