The New York State fourth-grade curriculum standard requires a year’s study of its own history. Here’s a sample of the official requirements:

The historic study of local communities focuses on the social/cultural, political, and economic factors that helped to shape these communities … themes and events at the local level: Native American Indians of New York State, the European encounter, the colonial and Revolutionary War period, the new nation, and the period of industrial growth and development in New York State.

One’s first reaction might be recalling the dull, didactic recitation of dates and places of one’s own school days. But, in the hands of an inventive teacher, like Haldane’s Simon Dudar, what could be dry vestiges of an earlier era instead have come to contemporary life in a yearlong, start-to-finish filmmaking project.

“You can teach pretty much anything through moviemaking,” Dudar said. “By bringing history’s stories to life, we’re teaching the standard, but replacing an out-of-date curriculum with a new one which has the same goals: It’s the same ‘what,’ but the ‘how’ is different.” 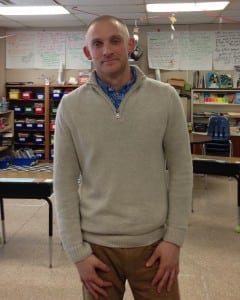 Dudar is effectively acting as the producer of an all-student effort, from research to storyboarding, narrative construction to location scouting, with the final product, a documentary film, expected to be delivered at the end of May.

To help accomplish this goal, Dudar has enlisted the help of some heavy-duty film professionals, including several people associated with the Jacob Burns Film Center (JBFC), where it is hoped the film will premiere later this year, and renowned filmmaker Jim Jarmusch, who has a connection to Haldane.

They, along with others, including Putnam History Museum’s Mindy Krazmien, documentary filmmakers Ivy Meeropol and Peter Sanders and others, are offering assistance, either directly or in the form of introductions to others.

This is the second effort from Dudar’s students. As a third-grade teacher last year, he guided that class (eight or so of whom are with him again this year in his shift to fourth, now as seasoned film professionals, with a knowledge of, among other things, “sound bridging, transitions, long versus medium shots — they’re really helpful,” according to Dudar) in creating a film about wildlife in this area. That project was also given an assist by the JBFC, and the class had the opportunity to go there on a field trip and meet with a wildlife documentary filmmaker.

The connection to JBFC was made through Haldane Elementary and Middle School Principal Brent Harrington, whose own son attended a camp there. Harrington met the center’s director of education, Emily Keating, and forged a relationship, built upon by Dudar, who wound up attending JBFC’s Summer Teachers’ Institute (click here to read a blog post by Dudar posted by the Center).

“Everything they’ve offered to us has been free of charge and incredibly helpful — the kids even post on the JBFC’s blog,” said Dudar. Last year Haldane held an assembly to show the whole elementary school the finished film. This year, along with the anticipated JBFC screening, there are other possibilities, including potentially showing it at the Cold Spring Film Society’s riverfront summer series, as well as at Haldane’s Discovery Day later this school year. 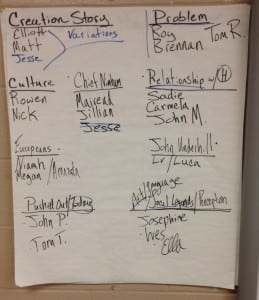 The students were divided into small working groups, each addressing a different aspect of the research; their results informing the eventual film.

As of early March, no actual shooting had begun, as the project was still in the research and storyboarding stage. Location scouting and filming itself were somewhat stymied by the amount of snow still on the ground so late in the season, preventing accessibility to some key sites, including the Foundry and even affecting the ability of guest advisors to travel to Haldane itself.

This year’s film (not yet titled) addresses the history of Native Americans in this area. In the initial stages, students visited the Putnam History Museum, where Krazmien spoke with them, and pulled out many pertinent artifacts. Throughout, the imperative of complete accuracy was stressed. “The idea is that when the movie is done, it could become a movie that is factual enough to be shown at the museum in the future, for others to learn from,” Dudar explained.

“What we learned contradicts some text sources, and we talked about that … then we had a visit from Hadrien Coumans, a co-founder of the Lenape Center in Manhattan, who is the parent of a fourth-grader. He talked to us about misconceptions, which we want our movie to dispel,” said Dudar.

The Lenape Center, which has the mission of “continuing the indigenous Lenape cultural presence in Manhattan by promoting Lenape language and the creation, development, distribution, exhibition of Lenape arts and culture” will fact-check the product when things are still fixable, to ensure that there are no misrepresentations; they will endorse it once satisfied.

Students divided up into groups, discussing different aspects of the subject matter, determining the eventual content of the introduction, creation stories section, important local Native Americans such as Chief Nimham, the relationship with Europeans, Henry Hudson and more.

The students also talked about perceptions of artwork and language and discussed what has happened to the Lenape, their culture today and how it is kept alive. These discussions were augmented by work in accompanying arts classes. Jean Cendali’s art class created traditional Native American instruments, making them in the manner in which they used to be created. Music teacher Danielle Cornacchio selected music to reflect the mood of the film.

Mixed into every component of the process were the meat and potatoes of schooling, English and math. Math factored into stop-frame animation techniques, while tone and description enhanced the script. Throughout, the students have displayed dedication and enthusiasm.

“We talk about making this be their best effort, but we really don’t need to talk about it because I can’t get them to stop doing revisions, because they want everything to be perfect,” Dudar said. “Even though this is nonfiction, they get to be creative about every aspect of it.”

As the year continued, more special advisors stepped in. Jarmusch, whose career as a writer / director / producer began in the ’80s, came in and spoke about moviemaking, referencing the reconstruction of an entire Makah village in the Pacific Northwest for his 1995 production of Dead Man, which featured dialogue in the Makah language spoken by actual members of that Native American tribe, who live in Washington state.

Aaron Mace, a JBFC education department faculty member, presented on the foundations of storyboarding, and Cold Spring’s Peter Sanders, who has directed two documentaries, spoke about how to put together an effective film in that genre.

Dudar “absolutely” plans to continue with this all-encompassing filmmaking project in future years, learning new techniques himself, alongside his students.

For more information on Haldane’s participation in the JBFC programs visit mrdudarsclass.weebly.com. For information on the Lenape Center, visit thelenapecenter.com.

Click here to view stop-motion animations made by students in Dudar’s class.

One thought on “Fourth-Grade Filmmakers Collaborate With Burns Film Center, Jim Jarmusch, Others”