Dockside Park, an integral part of Cold Spring’s waterfront offering some of the most scenic vistas in the region, is a bit closer to being protected against the erosive forces of the Hudson River. Shore protection measures designed through a $75,000 grant from the New York State Department of Environmental Conservation (DEC) and the Hudson River Estuary Program were outlined at the Tuesday (March 25) meeting of the Cold Spring Village Board.

Dan Miller, DEC project manager, said that once the required permits are in place, the village will be in a good position to seek senior government funding for undertaking the recommended works, estimated at a cost of $700,000. Access to funding would be further enhanced, he said, once the village completes its Local Waterfront Revitalization Strategy. He indicated that most grants include a matching component that the village would have to provide.

Dockside Park offers some of the best vistas in the entire region.

The New York State Department of Parks, Recreation and Historic Preservation, owner of the property, will apply for permits required by the DEC, the U.S. Army Corps of Engineers and the Office of Government Services. Miller said that funders strongly favor “shovel ready” projects and that the permits are a vital step in that direction. Dockside will serve as a demonstration project for shore protection measures that can be emulated by other communities.

The project divided the site into 15 segments in three major zones: the section facing north, characterized by shallow waters and important wildlife habitat; the section facing west, which suffers particularly from ice scouring in winter; and the southern section, which experiences the most severe erosion.

The southern zone is marked by steep, eroded banks. “That’s what it wants to be,” Miller said. “We’re not going to fight it, but we will try to stabilize it.” That approach reflects a change in philosophy that uses “softer” methods of erosion control, taking natural characteristics into account rather than “hard” and more costly techniques, such as steel break walls.

At Dockside, methods will include use of rock, terracing and planting of vegetation — depending on the nature of each shoreline zone. As an example, Miller said that species such as dogwood could be used in the west-facing section to stabilize the shore. Even though ice will sheer off the vegetation from time to time, the plants will regenerate, he said. 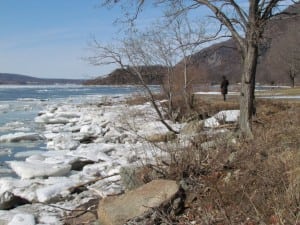 Miller pointed out that the project does not provide flood prevention; rather the designs take changing and varied water levels into account. He also said the project did not consider site use — although it does include provision for a boat ramp for non-motorized watercraft and allows for possible construction of a building for the Building Bridges, Building Boats program. Miller emphasized that whatever is done at Dockside, some upkeep will be required. “There is no such thing as a maintenance-free shoreline,” he said.

He was open to Mayor Ralph Falloon’s suggestion that a public meeting be held for a more detailed review of the designs.

Negotiations with the state parks department, which would see the village take over management of Dockside Park, are ongoing.

With a March 31 deadline looming, discussions continued on the future of the Cold Spring Boat Club and the removal of toxic coal tar on the site it occupies on the riverfront, property owned by the village. The DEC wants the Boat Club “abandoned” by the end of March, although Falloon has requested an extension until April 22. Falloon told The Paper that in reality, “abandonment” means that the village must have “all our ducks in a row” by that deadline — including condemning the building in order that it can be razed prior to excavation of the coal tar.

Design work for remediation is essentially complete, and DEC will soon seek bids from contractors — but not until details of the abandonment are complete. Excavation is scheduled to begin in the fall, although the Boat Club will continue to have access to the site until the end of boating season, even as contractors prepare to start their work. Details of how the site can be shared during that period must also be finalized.

While the two club officials said that almost all of the 25 points in a draft agreement prepared by interim village attorney Bill Florence are agreeable to the club, they still have concerns. Chief among them are ensuring the right to rebuild the club’s facility and the length of the lease. The club currently has eight years remaining on a 20-year lease.

“Eight years isn’t enough,” Patinella said, and that a “minimum of 20 years” is needed by the club in order to finance construction of a new building. “Less than that does not make sense,” Petrie added.

Village resident Rich Franco said that the club was not being “altruistic” and acts for the benefit of its members rather than the entire village, but he supports the idea of a long-term lease. “Twenty years is very reasonable,” he said. “I haven’t heard anything (as to) why there should not be a long-term lease.”

Trustee Cathryn Fadde said that although “everyone is afraid to say it,” the Boat Club’s exclusive use of the property “is an issue for a large part of the community.” Trustee Stephanie Hawkins reinforced that sentiment, commenting that Florence had also raised public access and exclusivity as sticking points in previous discussions. “We know it’s an issue and are open to discussion,” Petrie responded. The 2012 Comprehensive Plan also calls for increased public access.

Michael Armstrong, a village resident, referred to the Boat Club property as one of the most valuable on the Hudson River, one that has the potential to generate thousands of dollars in annual rent for the village each year. The Boat Club currently pays no rent.

Falloon said he was heartened by the fact that there seemed to be no major objection to a long-term lease. “What I’m hearing is that that’s OK if everyone (the village and the Boat Club) is protected,” he said. “We’re further along than I thought we’d be tonight.”

The Boat Club’s future and the coal tar remediation project will be high on the list of issues when the reconstituted Village Board takes office in April.