The approval came after a stop-and-start process dating back to October 2011. The current formal site plan review began in September 2013.

After final reports from consulting engineer Chuck Voss and the board’s outside counsel Anna Georgiou, the board voted 4-1 to approve the site plan agreed to by Butterfield Realty LLC, the organization formed by developer Paul Guillaro to build the project. 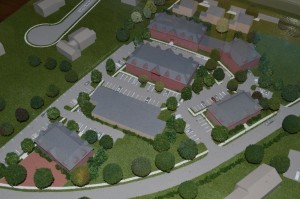 A 3-D model of the proposed Butterfield development on display last year at the Village Hall. (File photo by M. Turton)

The board also voted preliminary approval of the subdivision plan that includes three single-family homes that will also be built on the 5.4-acre site. The regulations for subdivisions are different, and another public hearing will be scheduled as well as a joint meeting of the Planning Board and the Village Board of Trustees. The Planning Board hopes to have a subdivision hearing in May.

The Historic District Review Board (HDRB) will still have to issue a certificate of appropriateness as to the design of the buildings. That is expected to follow in the weeks ahead.

The approval comes with a number of conditions the applicant must comply with, mostly involving adherence with state, county and village laws and regulations. For example, the New York State Department of Transportation must grant a permit for site access roads onto Route 9D, a state road (Chestnut Street). The Department of Environmental Conservation must render approval of the site’s storm-water runoff plans.

The Planning Board’s approval as lead agency on the project will strongly influence other government agencies’ consideration of the project.

The developer will also have to complete a satisfactory agreement with the village government allowing for public access to a new Gateway Park area on the site. 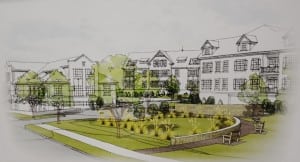 A concept drawing of the project.

Planning Board member Arne Saari explained after the meeting that he voted no because he remains concerned that the mass and scale of the project will present problems for the village. He specifically cited inadequate parking concerns as a risk to safety as an example. He acknowledged that once the Village Board voted to approve a concept plan, the Planning Board was limited in its ability to address his (and other members’) concerns.

After the vote, Guillaro expressed his appreciation for the approval and the hard work of the volunteer board as well as the paid consultants.

With other approvals and legal processes still to come, construction on the site might not begin until 2016, although demolition of the old hospital structure could conceivably start this year.