The PTA Learning Differences Committee (LDC) has been busy this year exploring difference in several grades, with an emphasis on creating classroom environments that continue to become more accepting and tolerant of difference.

LDC wants students and teachers to understand that sometimes difference is not overtly apparent but exists internally. Not only do we all look different — we all think differently, have different strengths and weaknesses and approach learning in unique ways. For example, a simple understanding of whether you are a visual, auditory or kinesthetic learner can emphasize how two people sitting next to one other in a classroom experience learning in very diverse ways.

LDC is committed to increasing everyone’s comfort levels with human behaviors and tendencies that might feel unfamiliar or different. Tolerance and acceptance start not only with awareness of difference, but also by presenting solid, current information so students can develop the personal competence and comfort necessary to become empathic individuals.

This winter, Haldane sixth-graders participated in a project that focused on learning about Autism Spectrum Disorder (ASD). Students watched a video narrated by a very articulate and creative young woman diagnosed with Asperger’s Syndrome, a type of ASD. She is the oldest in a family where all the children are diagnosed with developmental disabilities. Her brother, also featured in the video, has a form of autism that is more visible because, unlike his sister, he is unable to communicate verbally and displays behaviors that are more obviously different.

The sixth-graders were able to learn that being on a spectrum means that people diagnosed with the same condition can have similarities and differences, but that no two individuals with autism are exactly alike. They also learned that a wide range of people can have similar struggles even though they may appear outwardly different.

Classroom discussion focused on exploring ways to include children with different life experiences in school activities and social circles. LDC spoke about how everyone wants to be accepted and included and offered open talking points and concrete ways to facilitate this. The sixth-graders learned that children with ASD often have difficulty communicating, thinking abstractly, processing their five senses and with social skills.

This does not mean they all struggle with academics. Sometimes they can have super skills in areas like math and the arts. LDC emphasized the importance of being a good friend by remaining curious and finding ways to connect with people rather than finding ways to remain separate. The students learned that though it might feel risky to reach out to someone who has not been in your social circle before, the reward is that you get to develop those qualities that you identified as important to you.

Finally, students were treated to a guest speaker, local high school student Durant Crow, who is diagnosed with Asperger’s Syndrome. Crow came to Haldane and spoke to the sixth grade about what it was like for him throughout his years in school. He focused on how to be a good friend by sharing both positive and negative peer relations he has experienced. He let the students know it is less important to him to be understood than it is for him to feel accepted. 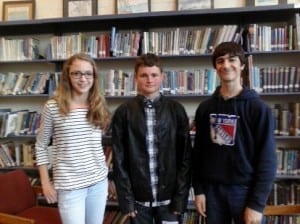 His closest relationships over the years were with a few kids who found humor in his difference and accepted him for who he is, not for who he isn’t. He spoke of being misunderstood by both children and teachers and talked about the skills he’s had to develop over the years to get along.

He also emphasized that he has the same feelings, needs and desires as every other 15-year-old. He is not his diagnosis; Asperger’s is just part of the complexity of traits that make him who he is. Haldane sixth-graders met him with warmth, acceptance and curiosity, demonstrating their growing comfort and competence in understanding how to simply “be” with difference.

Meanwhile, LDC met with each third-grade class to help students better understand both their commonalities and differences. What students determined as important to everyone in their class became that classroom’s shared values, such as being a good friend to others, helping those in need and showing empathy and compassion to classmates.

Students then watched a brief video about elementary-aged children who have learning differences such as ASD and ADHD (Attention Deficit Hyperactivity Disorder). The children in the video were not actors but real kids who spoke openly about their challenges and strengths. They all expressed wanting to be accepted by peers.

LDC doesn’t just focus on students; each year the committee brings a guest speaker to the adults at Haldane. This winter, Elisabeth Janz Meyer-Reich, a trained Mindfulness-Based Stress Reduction therapist, presented information on MBSR. Participants were briefly introduced to how mindfulness can ease stress levels and improve both teacher-student relationships and overall school climate. She introduced the concepts of MBSR and provided the opportunity to put those concepts into action with expert guidance.

Parents, teachers and administrators all practiced mindfulness together in Haldane’s music room on that very cold January evening. Brent Harrington, Haldane’s elementary and middle school principal, stated: “I liked her example of being mindful of the ‘scripts’ we often write in our heads, anticipating stress and discord, and its resulting negative impact on our mind and body.”

To learn more about LDC, visit facebook.com/PTALearnDiff. The next meeting is April 14 at 7 p.m. at the Cold Spring United Methodist Church, 216 Main Street.

One thought on “Being Mindful of Difference”