Members of the Putnam History Museum last Saturday (March 28) crowded into its historic headquarters, the old West Point Foundry school, for their annual meeting, whose agenda highlighted new developments — a revamped WPF exhibition and acquisition of a Parrott cannon — and the end of an era, with the dismissal of the museum’s curatorial staff.

PHS Executive Director Mindy Krazmien provided a short overview of PHM finances, noting that “we did come in on-budget in 2014.” She referred everyone to the printed report’s mention of income, expenses and investments. “That doesn’t always mirror exactly what we did,” she cautioned. “But that gives you a snapshot of the overall health of the organization and what we’ve been planning.” 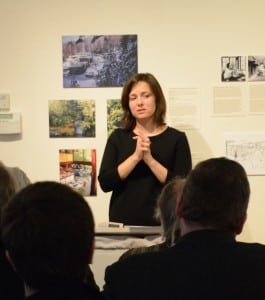 She announced that “we, in 2015, made a difficult decision to eliminate our curatorial department as it existed,” under veteran curator Trudie Grace, who organized a series of topic-oriented special exhibits over the years. With local resident and historian Mark Forlow, Grace also authored the 2014 paperback photo-history book, The West Point Foundry, published by Arcadia.

Krazmien attributed the departure of the curatorial staff to the realization that funding for special exhibits “was evaporating” and a desire to place less emphasis on special exhibits and more on the PHM permanent collection. “This is what the volunteers work on,” the collection, she said. “But we want to put more than volunteer resources to that. We don’t have a plan yet” and “are taking a year to assess where we are.” For some six years, “as funding dwindled,” she recalled, the museum looked at “every penny we were spending. And we continue to do that. Over the years we’ve only been scaling back. We hope in 2016 we’re going to be scaling forward.”

On a positive note, she pointed to the opening in May of a revamped exhibition of the museum’s West Point Foundry materials and its delight in obtaining the Parrott cannon (currently awaiting restoration).

According to Krazmien, a few years ago, the museum took stock of itself, and “one of the weaknesses” identified was a lack of interactive features and a need to be “appealing to a more general public. We had really sort of nailed being as accurate as possible and presenting good history” but wanted “to up our game and make it more enjoyable” as a museum for visitors of all ages, Krazmien said. Things began evolving; one result is the forthcoming foundry presentation. “As a small organization, sometimes you don’t see all the changes you want immediately,” Krazmien told the audience. “But … we’re taking a really big step with this exhibition.”

Perhaps before long, the Parrott cannon will also be on view. It came to the museum through the assistance of a family outside the immediate area, with help and advice from the West Point Museum. “This was an amazing, amazing opportunity for us,” Krazmien said. “These guns are coveted; they’re hard to come by. We’re very excited.”

The meeting included the election as trustees of Forlow and three others: Christine Foertsch, Matthew McGinley and William Jeffway. With the retirement of Bill Hicks, Jennifer Mercurio took over as board chairperson.

A class in Revolution

Later in the evening, Col. Jim Johnson, a West Point graduate and history professor, in the uniform of Continental Army officer James Johnston, outlined Revolutionary War activities in the Hudson Highlands. Early in the war, as he explained, attention focused in part on defenses and building fortifications in such spots as Constitution Island, just south of the present Cold Spring. 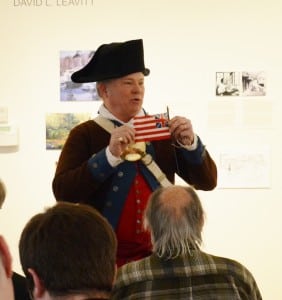 At the Putnam History Museum annual meeting, Col. Jim Johnson, in the guise of a Continental Army officer, displays an early Revolutionary War flag, complete with a version of the British Union Jack, that indicated colonists’ mixed loyalties.

At one stage, Johnson said, to take up positions on strategic heights in the dead of winter, Continental Army “soldiers march over the ice — they will actually march across on the ice” to occupy West Point, making it — to this day — the longest-occupied U.S. army outpost.

In 1778, the army decided to augment its land defenses with the “Great Chain,” stretched from Constitution Island across the water to West Point. Cast in a furnace in Sterling Forest, it was assembled in Newburgh, Johnson said. “I’d argue that one of our first contracts was one of our best,” he said, for the chain came in on time, on budget, and “it deterred” enemy warships.

But the vagaries of Hudson Highlands weather almost proved its undoing, he observed. The chain had to be removed seasonally to keep it from being destroyed by the cold. The army delayed in December 1778, “and we almost lost it that first winter.”

Luckily for the Revolutionary cause, intrepid soldiers wrestled it out of the water, preserving both the chain and a crucial link (literally) in Hudson Highlands defenses.