A watery solution drips and falls, drop by drop, into a collection bucket. If it’s a bigger operation, the sweet liquid flows through a tubing or pipeline system and into a food-safe collection tank, though it’s anything but automatic. In maple tree tapping operations, nature commands the trickling flow of sap from sugar maples, and this year, sap flowed later than normal around the Hudson Valley.

John Stowell, program director with the Taconic Outdoor Education Center at Fahnestock Memorial State Park, orchestrates operations at the TOEC Maple Leaf Sugar Grove. He found himself still deep into the process of firing up the evaporator at the center’s sugar shack at the close of March. Typically, he finishes up sugaring season weeks earlier, but this year’s operations ushered him right up to April with a late but strong release of sap. 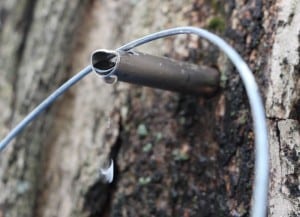 Weather controls the flow of sap, stored in the trunk of sugar maples. Ideal conditions of cold overnight temperatures combine with a warmer daytime environment to naturally spur a run of sap.

“We’re processing 800 gallons of sap right now,” Stowell said, “and our trees are letting loose with a nice run.” The morning’s capture of sap from the grove proved profitable for a late-season day.

“We had a few cold nights and warm sunny days, which we need in unison. The lighter syrups are produced earlier in the season, but we’re still making medium, right in the middle.”

The grove includes about 375 trees, and Stowell utilized approximately 300 maples in the 2015 tapping operation. Though the grove sounds more than ample, a good amount of sap is needed to produce syrup. According to the Cornell Sugar Maple Research & Extension Program, it takes about 43 gallons of sap to produce one gallon of syrup.

After being captured, sap is boiled to remove water, which means a heating source is required to burn off about 42 gallons of water to allow the remaining gallon to thicken into darker syrup. For those who want to appreciate the labor that goes into the creation of that morning serving of maple syrup over waffles, one season of tapping at home may help to realize its worth. 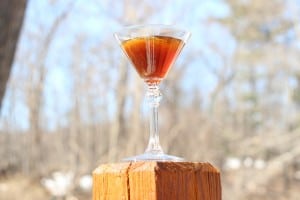 I can’t say that I have regrets, but I’m leaving syrup production to Stowell and the TOEC. With one tapped tree and a couple of runners to help capture the sap, I experimented in my own yard this season. The first attempt turned into a sugary batch of candy (utterly rich despite being a sugar-coated accident), but the second batch, boiled down on the stovetop for hours, produced a pint of precious golden liquid.

Household items worked to move the process along. A piece of aluminum from a discarded curtain rod, placed in the tree after drilling a tiny hole, served as the spile, where the sap exits the tree. Reusable plastic containers were used to capture and store the sap until boiling time. Overall investment: a few hours at the stove. Result: some sticky-sweet candy and a pint of perfectly pourable syrup.

The payoff is the syrup itself, but an added benefit is the process of maple sugaring, which brings people back to nature after a long winter indoors.

“We’ve gradually expanded our program year after year,” Stowell said, “and interest continues to grow. We have large groups coming daily. That’s the beauty of maple. Maple gets people back outside.”

Many in these groups are students who visit the sugar shack during sugaring season to see how sap is boiled down to make syrup. And once they see the process with the center’s commercial evaporator, they want to take some of that pure maple syrup     home. Packaged under the Hudson Valley Maple Farm label, TOEC sells a variety of sizes and grades of maple syrup. Sales of the local product support the maple operation and other educational programs at the center.

If there’s a transitional food to usher in springtime, at least in the Northeast region, maple syrup measures up to the task. The natural treat from the sugar maple, New York’s official state tree, also serves as inspiration for endless sources of recipes. Pancakes wouldn’t be the same without a generous syrupy coating, but beyond breakfast, maple shines in main course recipes, desserts and salads. Glazing greens with a hint of maple adds a sweetness to set a salad apart from a standard vinaigrette-laced variation. It’s near perfect at room temperature, but maple vinaigrette dressing tastes its finest served warm. 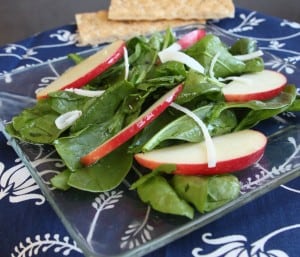 Stowell keeps a supply of maple syrup on hand for his favored uses. “Pancakes are great but it’s even better on Ben & Jerry’s ice cream,” he said. “Vanilla with light syrup. And once you open the bottle, it has to go in the fridge, but I can’t imagine anyone letting it sit around for very long.”

Whisk balsamic vinegar and maple syrup together in small saucepan to prepare vinaigrette. Heat on stovetop to medium temperature, not to boiling point.

Toss maple dressing with apples and spinach in mixing bowl.