It’s official: The Cold Spring Village Board has three new trustees. Judge Thomas Costello presided over a brief ceremony at Village Hall on Monday evening, April 6, 2015, which saw Dave Merandy sworn in as mayor while Marie Early and Fran Murphy took the oath of office as trustees. 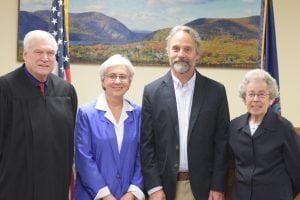 Merandy’s mother, Peg, held the Bible as her son took the oath. Susan Early did the honors for her sister Marie Early, and Murphy was assisted by her husband, Ed Murphy. The three were elected March 18 and join incumbents Michael Bowman and Cathryn Fadde on the five-member board. The newly constituted Village Board met for the first time on April 7.