If the summer season under the tent is the showpiece of the Hudson Valley Shakespeare Festival (HVSF), the festival’s yearlong educational programs are the meat and potatoes, or, more accurately, the vitamins and nutrients that nourish and fuel everything else on the table.

Though the most obvious public face of the festival is its repertory season, the organization is busy year-round in service of their stated mission of “engaging the widest possible audience in a fresh conversation about what is essential in Shakespeare’s plays.” In charge of the fleet of educational residencies and touring shows, summer camp, actor training, teacher training, fellowships and — new this year — a school sonnet-writing contest is Sean McNall, the festival’s recently appointed director of education as well as its associate artistic director. 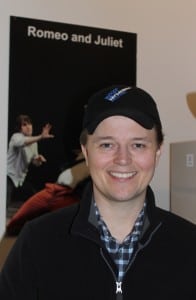 McNall, who has moved up from the city with his wife, a nurse practitioner, and their 2-year-old son, started in the position last August, but it was not his first encounter with the festival. In 2001, soon after graduating from Juilliard, he played Romeo there. Following his appearance, he spent 12 years with the Pearl Theater Company in the city, appearing in numerous productions and garnering a 2008 OBIE award for Sustained Excellence in Performance along the way.

“A big part of what Pearl does is outreach to students,” McNall explained. “It’s a smaller outreach, just to six or seven schools, but we worked with those schools all year long, about 20-odd times. I was passionate about it and wound up as director of education there.”

McNall is undaunted by his mission at HVSF. “I inherited an extraordinary and robust program from Chris Edwards [the former director of education], including many teaching artists who trained under him, as well as quite a few new ones as well. It’s extraordinary, considering our budget, how many we reach through our education programs,” he said.

This year, HVSF’s touring production (Macbeth) will be performed in a 90-minute edition in approximately 30 different venues, ranging from as far south as Fordham Prep to schools north of Poughkeepsie. One of those 30 is the Depot Theatre, where it will be performed on April 11, at 2 and 7 p.m. Directed by frequent company actor Ryan Quinn, the cast features three former apprentices, including Garrison-raised Rachel Ritacco. The constancy appeals to McNall. “My commitment is to the young artists we train and help segue into teaching,” he said. “We try to single out people who have a resonance with young people. We try to consider how we can amplify what we’ve done to expand audiences.” 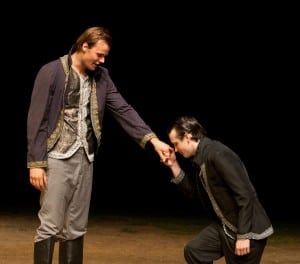 Along with the touring production, HVSF conducts many residencies in schools, ranging from one to five days. In the one-day residencies, the teaching artists go into the schools before the performance and conduct hour-long workshops with the teachers, giving them the tools to work with the students independently, post-show. The five-day editions consist of a number of exercises, from academic to improvisatory. The residencies occur in districts with plenty of arts funding, as well as in those supported by grants and fees, where this would normally not be affordable.

The festival has forged strong ties with West Point and works with veterans’ groups. In addition, they hope to increase the number of workshops they present at correctional facilities and to families of the incarcerated. They also work with the Phoenix Academy, which assists “kids in crisis, sometimes from substance abuse,” McNall said.

Formerly a bit of a hodgepodge of events on different days, all preshow activities will now occur Friday nights, and audiences can expect a different activity each Friday evening throughout the season (June 9 through Sept. 1). There’ll be a mix of activities, some geared toward teens or children, others for adults, but all designed to “put the plays in a different context,” according to McNall.

The popular Shakespeare Summer Camp returns for its third season, again featuring the successful teen camp from last year (with two age groupings: 8 to 12 and 13 to 16), led by many of last year’s teachers. This time the camp, held at Haldane, will expand into two separate weekly sessions; campers can do just one or both. 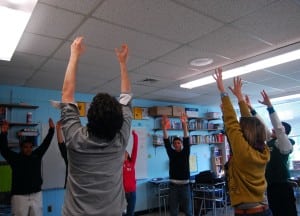 McNall called it “extraordinary to see the confidence and wild abandon that 8-year-olds are showing — I can’t wait to see more of it.”

Garrison School is playing host to an eight-week workshop series, which presents a modified version of what is accomplished in the high school workshops. “They’re not just doing one play, they’re doing five of them, and thinking about, ‘how do we create our characters, approach the text and master the rhythm of iambic pentameter,’” explained McNall.

The apprentice program has been overhauled and is now known as the HVSF Conservatory Company. HVSF seeks to begin treating “the apprentice show” as a greater part of the season. There are 12 performances of this year’s show, The Tempest, and to give it a touring life, the conservatory now features a 20-week training program geared toward early-career actors. The seven or eight chosen for the free program, designed to transition them into professionals and to meld them into a company, will begin their five-month immersion just a couple of weeks from now, rehearsing along with professional actors in New York City before heading to Garrison in June.

As before, they will play supporting roles in the season’s offerings while rehearsing their own play, performed in August and September, with a final industry showcase performance in the city.

McNall hopes to grow HVSF’s programs: “I’m really committed to trying to be a constant presence in Haldane, Garrison School and in Beacon. I’m trying to get to know the many new [school] superintendents, and also to look to more partnerships within the community. The festival is an economic driver here and is certainly one of the big reasons people come here.”

McNall came to the job through HSVF Artistic Director Davis McCallum. They met after McNall had graduated and were both at Shakespeare in the Park, and reconnected when McCallum directed Henry V at the Pearl four years ago. McNall later called him up while considering a move out of the city. “It’s the best choice I’ve ever made. This [community] is an extraordinary collection of people. It’s a privilege, and I truly enjoy coming in here every day.”

For information on these programs, visit hvshakespeare.org. For tickets to Macbeth at the Depot, which cost $20, call 845-424-3900 or visit brownpapertickets.com.