A good week is when we can note a milestone number of editions of the newspaper you’re reading and also announce that we have won three more respected annual awards from the New York Press Association. Having come this far gives us the feeling that, hey, this whole thing might work after all. But when an organization has a week like this and someone integral to the mission is missing it, that absence makes it harder to celebrate.

Gordon Stewart would have loved seeing his idea of a print edition he insisted on calling The Paper reach this point. He first announced to us he thought the community needed a print newspaper right around this time in 2012. Our website Philipstown.info was not yet two years old. Gordon didn’t want to hear about the thousand and one reasons for not doing print. Full steam ahead. 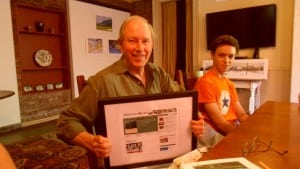 We did need a few months to figure out how a paper might actually come out each week on schedule as opposed to the timeless quality of a website. All the while we were pushed and prodded by Gordon’s eagerness, impatience and occasionally exasperating ideas, as well as brilliant flashes of insight.

I remember sitting with Gordon one evening briefing him on our progress, telling him (to his disappointment) that we needed at least another week of rehearsal — no Memorial Day weekend opening. The theater director in him understood; the producer with the costly investment, however, did not. For the last time, to clear my conscience, I told him that once we started printing there would be no going back for fixes and rethinking. We’d have to do it on the fly and it would be expensive. You couldn’t put a paper out and then pull it back without great embarrassment. He smiled knowingly and said, “Hurry up.”

Yes, it would definitely please Gordon to see this 150th issue stacked in the exit lobby of Foodtown as he checked on the supply some rainy weeknight. He would probably have stood there handing papers to startled shoppers, telling them who he was and asking them who they were and maybe catching a story idea along the way.

Because we were founded by a theater person, I often think of our operation as akin to a theater company. We perform in public with a new show every week. We are bonded collectively by the risk and rewards of our performance. Some weeks we endure the slings and arrows of criticism, others we get to bathe in the soothing waters of applause. We labor together to build a good reputation, always anxious about failing to live up to it.

The work we do is made all the more challenging by the intimacy of a small community. The work, for better or worse, defines us. The cumulative effect of all the decisions we make about coverage or lack thereof can wear on relationships wherein people bring to bear their own expectations of what we should or should not be doing.

A favorite publishable saying around 69 Main St. is “every day is Thursday.” It seems that no sooner do we finish sending a digital file off to the printer on Thursday evening we then wake up and find ourselves once again anxiously fussing over another 16 empty pages. Newspapering has a relentless, demanding aspect we must guard against to avoid cynicism and stale thinking.

These days a printed newspaper anywhere is a dubious proposition. The Internet has disrupted the local newspapers’ long-standing model of serving as the main source for news and information funded principally by paid advertising. People still want the news and still enjoy the presence of a physical paper as embodiment of community aspiration. But we must bear in mind that The Paper is free to the reader, adding to its appeal in the same way free ice cream would attract.

The Gordon Stewart plan for sustaining a local news organization, paper and online, involved community support on a nonprofit basis together with a continued commercial component. Illness hampered his effort to create a more detailed, strategic model before he died. But he was able to convince about a dozen talented, able local people to form a board of directors to carry on his work.

As with any new organization, especially one born out of the tragedy of the founder’s loss, there is an incubation period. All the people involved have to find new ways of working together, reach agreement on general principles, contend with government regulations, determine the best way forward and begin to ask for broader support than the generosity of the founder and the relatively few who have stepped up to date.

As we proceed we will keep readers informed of developments and eventually start asking for support in earnest. The ask will be based on the proposition that a community benefits in many ways from a newspaper that believes quality journalism matters, values fairness and is open to criticism and differing points of view.