Community choruses seem to be sprouting up all over Philipstown and Beacon, formed perhaps out of a desire for shared experience and expression as technology steals these things away. One of the area’s “old-timer” choruses, Rivertown Kids, is filled with “young-timers”: singers of ages 9 through 14 who have, in the words of the organization, “a commitment of time and energy, and a passion to change the world one song at a time.” 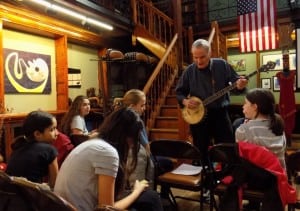 Travis Jeffrey goes over lyrics with some of the Rivertown Kids.   (Photo by Markie Baylash)

Founded in 2007 by Beacon teacher Tery Udell, with a giant assist from Pete Seeger, Clearwater educator Dan Einbender and the group’s current music director, Travis Jeffrey, the free-of-charge, socially conscious singing group is still going strong. It meets every Wednesday afternoon from 4 to 6 at the Howland Center, where kids learn songs, rewrite lyrics to reflect their own concerns and rehearse for performances not only in Beacon but as far as New York City’s Eco-Fest and the Clearwater Revival Festival, where they perform each June.

Three years into its existence, the Rivertown Kids won a Grammy, when Seeger’s Tomorrow’s Children picked up the honors for the 2010 “Best Musical Recording for Children.”

By now, the youngest of the original Rivertown Kids have aged out of it, including Luisa Uribe. Now a poised, impassioned high school junior, she said she was in “Ms. Udell’s fourth-grade class at Forrestal, when it all started with us learning about Native Americans.

Pete and Dan started stopping by, teaching us songs related to this. We started singing them in the hallways and wound up making so much noise that Tery had to take it out of the school!”

We started with Pete Seeger songs and after that we realized, “Hey — we can make our own songs.” We started with topics we felt passionate about. … At first we were mainly singing for ourselves, then we started singing at the Beacon Festivals: Pumpkin, Strawberry, the Beacon Day Parade. When people started hearing us, they said we should go to [Clearwater] Revival … Then we spent a day at this guy’s garage studio, recording with Pete, and we also made a music video with Pete; it was such a cool day. … We worked really hard on it, with Pete — bless his memory — he was amazing, so patient with us.

Uribe stayed with the Rivertown Kids for the duration of the time she was eligible. Now there is an entirely new group of motivated singers, a mix of those who are young and new to the process and those more seasoned, who often take the lead on songwriting. An illness over the course of the past year has led Udell to hand over the directing reins to Jeffrey, a longtime friend and colleague of Seeger’s, active in Hudson Valley folk circles for decades, a former member of the Hudson River Sloop Singers and captain of the Hudson River Sloop Clearwater during the ’80s and ’90s.

After Rivertown Kids stopped being a school group, they met for quite some time at Beacon coffeehouses, lacking a space of their own. “Then the Howland Center gave this to us, free of charge,” recalled Uribe. “They’ve been a big part of how well we did.” 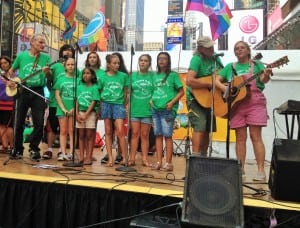 The Rivertown Kids, along with music director Travis Jeffrey, perform at the 2014 Eco-Fest in New York City.  (Photo by Tery Udell)

Bob Phillips, the Howland Center’s building manager, is happy to host them. “Pete was a big sponsor here and loved this center, and it’s nice to have the youth here. Every year they try to do a fundraiser for us, which is great, a mutual appreciation.”

Though numbers are down from the 30 or so kids who were part of the earliest years, there is still a contingent of regulars, some of whom have attended for a few years, like Molly Robinson and Aine Gunn, both 13. They are just old enough to have had direct interaction with Seeger. Molly said: “He’s always going to be important to us. He always loved us even if we drove him crazy by not getting, say, the clapping thing. He knew we cared about the environment and our community and he made us do our best for it.” 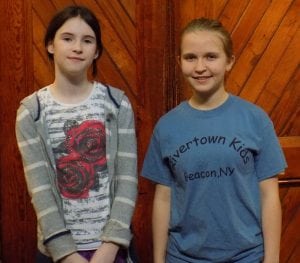 Aine enjoys the group’s writing process as well as performing, particularly at Clearwater: “It’s a favorite: good food, great music, what we sing for — a culture of many different people. It can be difficult, at times, working together with younger kids, but that’s part of the challenge.”

With the “graduation” of a number of singers last year, Rivertown Kids is actively seeking new members. Those considering it, or parents considering it for their children, should consider this description from their Facebook page: “Rivertown Kids gathers together young people who are willing to make a commitment to social and environmental justice by singing, songwriting, recording, and performing to ‘get the word out’ about living in a more responsible world … Rivertown Kids work hard. We give our time and energy to be part of the solution to building a better world … in our own unique way.”

Current Rivertown Kid Madelyn McGarry echoes this mission in her description of the program: “I love singing, but also what is unique is we write our own songs and write them with a message. This world is very messed up and we have to change it. We explain that message in our songs.”

Uribe described it as much more than a choral singing group.

From joining this group, I have a way different perspective on world issues than my friends … The community should help this group flourish. More kids, more boys, in particular — we had a lot of them then — should want to do something like this. At one point we were sending letters to human rights activists in prison in different countries, little letters of hope; that was one of my favorite things … I want to devote my time to other people, in other countries, who don’t have what we do. This group played a big part in this.

To find out more, visit rivertownkids.org or their Facebook page, then call 845-265-3393 or email [email protected] Copies of Tomorrow’s Children can be found at Main Street Music, 393 Main St. in Beacon.