Framed by a brick wall, a dozen men gaze from their carpentry shop in casual friendliness, standing near their benches, several in hats and aprons, another in a suit, as if interrupted on a busy workday. A stand cradles shapes that resemble cannon barrels, while boards and gear line the room and a carved eagle lifts majestic wings from its perch atop a corner cabinet.

Wind sweeps around the building and the unidentified men almost seem to move, before fading ghost-like into the past, in an enlarged 19th-century photo. 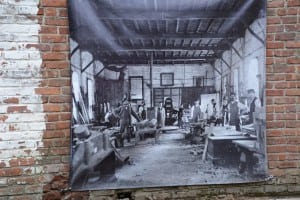 Skilled carpentry staff members look out from their work benches in a 19th-century photo displayed at the old pattern shop during a recent tour of Scenic Hudson’s West Point Foundry Preserve.

The photo hung from the ruined pattern shop at the West Point Foundry Preserve on April 4, when the site’s owner, Scenic Hudson, launched its 2015 monthly tours. That morning, a brisk Saturday alternately bright and overcast, Reed Sparling, a member of the Scenic Hudson communications staff, and local resident and historian Mark Forlow led some 40 visitors on a tour.

They paused at the pattern house photo and then at two others installed where the original pictures were taken well over 100 years ago. In two locations, where mere vestiges of buildings poked from the earth, the photos were suspended from trees in part of the small forest that grew up after the foundry closed in 1911.

But enough of the pattern shop or carpentry building still stands to give a tantalizing glimpse of the WPF in its heyday. Within its walls, highly skilled woodworkers created wooden replicas, or patterns, used to form the molds into which liquid metal was poured to produce the iron goods for which the foundry became famous.

Straddling a stream known as Foundry Brook, the WPF stretched from the Hudson River to Chestnut Street, at the southern edge of Cold Spring. An internal train system hauled materials; now a footpath from the Metro-North station in Cold Spring follows a rail line. “You can see the tracks,” below the gravel, one a woman suggested, eyes downcast, as she took the tour. 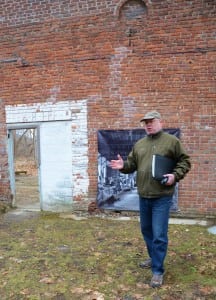 Mark Forlow, a local author and guide on the Scenic Hudson tour of the West Point Foundry Preserve, explains the role of the pattern or carpentry shop.

Co-author of the paperback picture-history book, West Point Foundry, published last year by Arcadia, Forlow noted that the foundry was laid out in 1817, not long after the end of the second war between America and Great Britain. “A huge issue of the War of 1812 was not having secure locations” for making ordnance, he said.

“West Point across the river was a great source of security,” Sparling added.

“And the foundry’s No. 1 customer,” Forlow interjected. However, he explained, as welcome as military business was, “that alone wasn’t going to sustain this place,” and the foundry also manufactured machinery; agricultural, architectural and transportation items (including railroad equipment); household goods; and more. Many details of foundry operations have been lost and as study continues today, “it’s truly amazing to follow it along and see what emerges,” Forlow said.

During the Civil War, the foundry labored round-the-clock, with shifts of workers, to crank out weaponry, including the rifled Parrott cannon. Named for Robert P. Parrott, a long-time foundry executive and innovator, the Parrott gun is credited with helping the North win the war. WPF cannons ranged in size from 10-pounders to 300-pounders, known by the weight of the projectile they shot, not for their own heft, which could be substantial: A 300-pounder cannon weighed 13 tons. 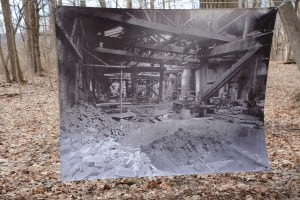 Displayed where the West Point Foundry molding shop once stood, a photo reveals the building’s pits, furnaces and equipment.

“This place on the Hudson River had an enormous impact on the war,” which ended on April 9, 1865, just 150 years ago, Sparling told tour-goers, a mixture of Cold Spring residents and out-of-towners. Officers on both sides were U.S. Military Academy graduates (among them Confederate Gen. Robert E. Lee, class of 1829, and U.S. Gen. Ulysses S. Grant, class of 1843). “They all learned from the same playbook, and the playbook was right over there,” Sparling said, indicating West Point.

Like the ruined buildings, tools and other reminders of the WPF’s glory years still exist — some in the Putnam History Museum’s soon-to-be-reopened collection, in the former foundry schoolhouse overlooking the factory grounds. And artifacts continue to sift up from the soil and the past. Outside the pattern shop, Sparling hoisted one example, a wooden pattern, and at the site of the casting shop he waved another, a metal ladle. 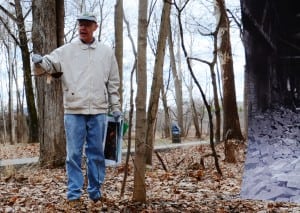 According to Sparling, in the mid-1990s during Superfund cleanup of pollution left in Foundry Cove by a 20th-century battery factory, thousands of artifacts came to light — underscoring the site’s significance. Around the same time, a proposed hotel development threatened the WPF, prompting Scenic Hudson to intervene and save it. Subsequent archaeological digs by Michigan Technological University and related research further emphasized the WPF’s importance to American history.

The WPF featured not only factory buildings but houses for employees, some of whom had an easy — and unusual — commute, as Sparling pointed out. Living on a ridge above the yards, they simply climbed down ladders to reach their workplace, avoiding a twisting lane that wound down the hillside. Other workers and their families occupied homes constructed by the foundry in Cold Spring, a village “considered one of America’s first company towns,” he said. 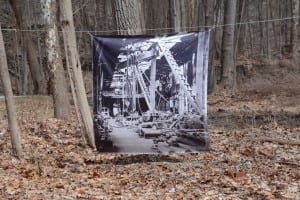 An enlarged old photo, showing the interior of the boring shop, hangs in the location of that building at the West Point Foundry Preserve.

Upon taking over the WPF nearly 20 years ago, Scenic Hudson, an environmental and historical conservation organization, cleared away trash (dumped by local residents after the factory shut its doors), made improvements and, after a year of further upgrades that included installation of historical displays, reopened the 87-acre preserve in fall 2013.

Tour-goers praised the site’s scenic value as well as its intriguing history.

“If you’re a bird-lover you can come and enjoy it. If you’re a history buff you can enjoy it,” and if both, all the better, Sparling agreed.

“It would be nice to come back on a warmer day and spend some time,” one participant declared, as the tour ended.