The Boscobel mansion will present a recital of songs by fortepianist Audrey Axinn, soprano Ilana Davidson, cellist Myron Lutzke and classical clarinetist Nina Stern at 8 p.m. on Saturday, April 18. In the grand entry hall of the Boscobel mansion, the quartet will be performing works by J.S. Bach, C.P.E. Bach, Haydn, Beethoven and Schubert on instruments that would have been played by musicians who lived at the time that Boscobel was home to Elizabeth Dyckman and her family. 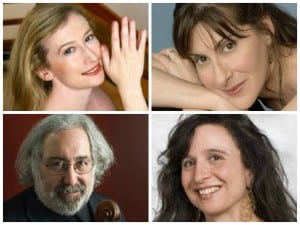 Pianist and fortepianist Axinn, who has performed at Carnegie Hall, Lincoln Center, Bargemusic and the Edinburgh Festival, teaches chamber music at Juilliard and is assistant dean at Mannes College.

Davidson’s recording of William Bolcom’s Songs of Innocence and of Experience conducted by Leonard Slatkin won four Grammy Awards including Best Classical Album. She was a vocal fellow at the Tanglewood Music Center and a participant in the Aston Magna Early Music Academy.

Lutzke serves as principal cellist of the Orchestra of St. Luke’s, the Handel & Haydn Society Orchestra of Boston, the New York Collegium and American Classical Orchestra. Lutzke is currently on the faculties of Mannes College of Music and the Brixen-Initiative Academy in Italy.

Stern, a recorder player and clarinetist, has appeared as a soloist or principal player with the New York Philharmonic, New York City Opera, American Classical Orchestra, Amsterdam Baroque Orchestra, Apollo’s Fire and Tafelmusik. Stern is on the faculty of Juilliard’s historical performance program.

Admission is $27 for members and $30 for non-members. General seating is on stairs and chairs. This recital is recommended for audience members 12 years and older, and the mansion is not handicap accessible. Tickets can be purchased online at boscobel.org.