Two ties and a win as teams start out strong

The Philipstown Boys U16 Daggers challenged Kingston United in their season opener, kicking off the 2015 spring season with a decisive 5-2 win. The Daggers welcomed Liam Macnamara to tend the Philipstown goal, where he showed poise and skill stopping a number of quality shots from the Kingston team. Eight minutes in, Ethan Penner found forward Seth Warren, who put the Daggers on the board. 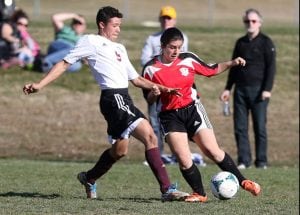 The Kingston offense quickly went on a tear, placing their only two goals of the match at 20 and 25 minutes. Before the half, the Daggers answered with a keen shot from Michael Harmancin, who followed with a score off a corner and another out front, rounding out a hat trick for the day. With minutes left, Philip DiSarro found the United defense asleep as he stole a cleared ball from their defense and placed it in the United net. The Daggers take on the Raptors at East Fishkill on Sunday, April 19.

Warriors hold off Mavericks to tie in opener

On a beautiful spring day, the Philipstown Boys U11 Warriors matched up against the Carmel Mavericks, a team who had spoiled the Warriors’ opening day last year. Play was tight until the Warriors broke through with a goal just before the first half expired. The second half saw the Warriors add two more goals to their lead before heat and fatigue set in.

The Mavericks scored three quick goals to even the match. Carmel had the momentum and it appeared they were on their way to a win. Fortunately the Warriors rallied and were able to hold on to the tie, with a final 3-3 score. The Warriors are away next week in Greenwood Lakes.

The Philipstown Girls U14 Eagles enjoyed a sunny and warm spring morning for their season opener against the New Paltz Strikers and finished with a 1-1 tie. The Philipstown “ladies in purple” owned the day, playing with purpose and poise, and controlled the pitch through the majority of the match. The Eagles played as a team with fluidity as they tested each sideline using forward surges combined with timely crosses into the middle.

The midfield and back field kept a solid foundation of trailing support to redirect the attack with crisp ball movement, and solid team play and ball control helped the Eagles test the opposing goalie with at least 10 shots on goal. The scoring goal for the Eagles was assisted by a well-placed kick by Kate Dwyer into two Eagles players who were ready to convert the cross when the ball bounced off the opposing team into the net for an “own goal.” The Eagles defense and goalies denied the Strikers in both halves of play with just one goal scored off a fast break that barely slipped by the right goal post.

It was a great opening day of exciting soccer at Haldane High School, and expectations are high for a very competitive season for the Philipstown Eagles.