Inter-service meet open to the public

The U.S. Military Academy will host its Second Annual Inter-Service Academy Parachute Team meet April 24–26 on the Plain, which is open to the public.

Teams from the U.S. Naval Academy and U.S. Air Force Academy will compete against cadets from West Point in open accuracy and speed events. The goal of the inter-service academy parachute meet is to build cooperation and unity among the different service academies. 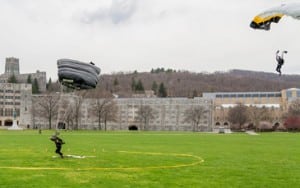 Jump operations for the freefall and accuracy competitions begin at 1:30 p.m., on April 24, and from 8 a.m. to 6 p.m., on April 25. On April 26 at 7:30 a.m., the teams will jump in a big way formation. Computers and projectors will display the freefall events. Accuracy will occur in front of the reviewing stand on the Plain.

The West Point Parachute Team is both a competition and a demonstration team. The team, with a history that extends all the way to 1958, aims to teach cadets about leadership in extreme situations in order to prepare them for their future as Army officers.

Attendees should enter through Thayer or Stony Lonesome gates. Proper identification is required upon entering academy grounds and all vehicles are subject to search. Parking will be available in Clinton Lot near the parade ground.