At a formal monthly meeting characterized more by the nitty-gritty of local governance than drama or debate, the Philipstown Town Board last Thursday (April 9) took steps toward restoration of two historic cemeteries and replacing a washed-out footbridge in Continental Village.

The board also deferred the appointment of a successor to fill out the remaining nine months of Dave Merandy’s term as a councilor following his election as mayor of Cold Spring. Likewise, Supervisor Richard Shea — as on previous occasions — promised a full public discussion before paving dirt roads.

The state of the old Cold Spring or Mountain Avenue Cemetery and its neighbor across the road, the Cedar Street or old Nelsonville cemetery, drew the board’s attention during passage of a routine resolution on lawn work. The town government cares for burial grounds no longer in use, even those within village boundaries. 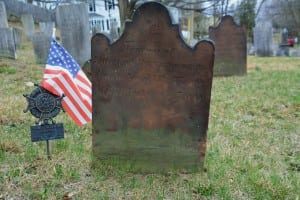 With graves dating back to 1788 or earlier, the Cold Spring cemetery occupies a strip adjacent to the Haldane Central School District campus. A bit “newer,” the Cedar Street cemetery lies in a strip of woods also near the school, behind the American Legion and Town Hall. In both, many tombstones lie fallen and in some cases partly covered with dirt.

“It’s just a shame,” Shea said. “People deserve to be respected in death.” He wants the tombstones restored, mapped and their inscriptions recorded before they further erode. “These are historic and are some of the oldest graves in Philipstown,” he noted. “Are we going to just let it go? I’m not willing.” 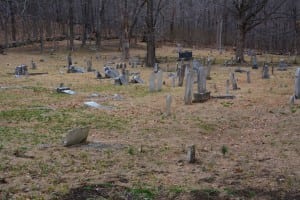 Tombstones stand amid trees in the Cedar Street, or old Nelsonville, cemetery. (Photo by L.S. Armstrong)

Councilor Mike Leonard, who took on cemetery oversight in 2014 upon the retirement from the board of the late Betty Budney, reported progress in clearing undergrowth, locating soldiers’ graves, and researching methods for repairing broken or fallen tombstones and setting them back in place.

“We’re going to discuss that and we’re going to move forward, setting aside at least some portion of money [so] that we can over time to restore the graves,” Shea announced.

Continental Village Park District Superintendent-Administrator Michael Phelan asked the board to review plans to replace a Cortlandt Lake–area footbridge dislodged from its location along a path extending from Steuben Road. Storms caused “the whole footing on the bridge to go and the bridge just wound up floating into the lake,” Phelan explained. “We’re going into our fourth year of having no footbridge there.” 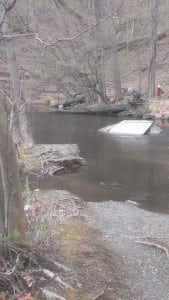 Storms a few years ago destroyed a Continental Village footbridge and flooded part of the pedestrian path extending from Steuben Road. (Photo courtesy of Michael Phelan)

The damaged bridge was salvaged, but rather than replace it he proposed the Town Board and park district (which includes parts of Cortlandt Manor and Putnam Valley as well as Philipstown) install a longer arced model to better fit the landscape and road. In short, he asked the board to “revisit the size and scope of the bridge, to facilitate having all the water stay confined in one spot” and avoid washouts. “The cost of replacing the road and putting the fill back in” is only one consideration; having “all of that stuff working its way into the lake and … rebuilding the road to have it washed back into the lake again is just environmentally unsound,” he said.

Moreover, installing a better bridge would decrease hazards for pedestrians, who, without the footbridge, now detour about two miles and must use Winston Lane, which “is abominable for walking,” Phelan said.

Phelan estimated a longer bridge would cost $39,000 to $40,000, compared to $24,000 for a shorter version, but would be much more durable. Shea said the board, the town engineer and the Continental Village Park District would confer on the possibilities.

The board accepted Merandy’s resignation, submitted in a March 30 letter. In it, Merandy asked his erstwhile colleagues to “please keep up the ‘Good Fight.’ Remember, if ever needed, you have a friend just down the hill. The door will always be open. I’m looking forward to collaborating with you in making our local government more efficient and successful.”

Shea predicted that with Merandy as Cold Spring mayor, “you’re going to see more synergy between the Town Board and the Village Board,” especially regarding consolidations, which “we need to do.” He added that the Town Board intended to name an interim councilor within a couple of weeks. “We don’t want to rush this.”

At least three dirt-road residents came to the meeting, and Shea promised a thorough consultation before paving but also advocated it in select cases.

“When we’re going to do things like this, we have a public discussion,” he assured the public. “We don’t just … show up in the morning and start paving a road. We’ve paved about one-third of a mile in the last 13 years. It’s not a rush; at this rate, it’ll take about 1,000 years to pave any roads.”

Nonetheless, because of drainage and other problems, “there are some sections that warrant a permanent solution, i.e., paving,” he said.

From the audience, Claudio Marzollo described a personal change of attitude on road paving. “After the beginning of Lane Gate Road was paved, I loved it,” he said, encouraging the board to “pave the rest of the road. I know there are budgetary constraints, but in planning long-term, please put us on the list,” he said.