The Beacon Fire Tower, restored and reopened to the public in the summer of 2013, is one of the Hudson Highland’s most iconic spots. But the individuals who provided the backbone of the labor to restore it may soon be barred from visiting it.

As The Paper reported last week, local officials from the cities of Beacon and Fishkill, as well as the New York State Parks Department, are looking to crack down on vehicular traffic on Mount Beacon and Fishkill Ridge. No new laws are being put in place; New York State law has already prohibited motorized access on the mountain’s trails for years.

The law has been difficult to enforce due to the multiple overlapping jurisdictions on the ridge as well as the long tradition of off-roading on the mountain. Instead of the law, the mountain was ruled by an unspoken agreement between authorities and off-roaders: Don’t make us come up there.

Now, with ever-increasing traffic leading to ever-increasing litter, noise and deep tire tracks that render the roads impassible to emergency vehicles; officials’ hands are being forced. But the drivers attracting the unwanted attention to the mountain are doing so at the expense of the organized off-roading clubs who have looked after the mountain for years.

“Without the Jeep clubs, the fire tower never would have been restored,” said David Rocco. “We had no other way to get the materials, manpower and equipment we needed there and back.” 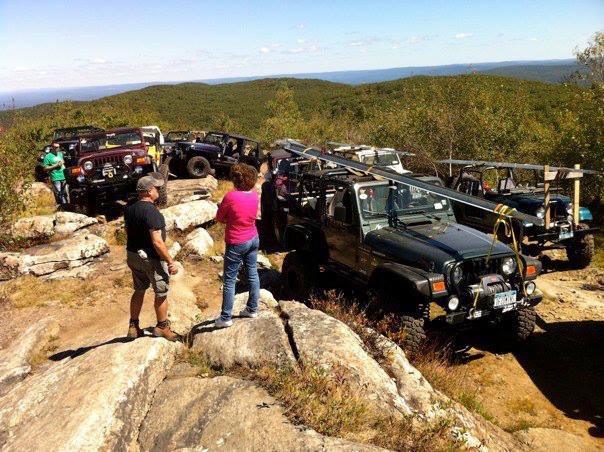 Members of local Jeep clubs help with the restoration of the Beacon Fire Tower in 2013.

Rocco spent almost 10 years volunteering with the Walkway Over the Hudson project in Poughkeepsie, dropping back to take a less active role once they had raised enough money to hire a paid staff. Shortly after that, he and his wife went on one of Scenic Hudson’s nighttime hikes to the casino ruins at the top of Mount Beacon.

It was on that hike that he first noticed the fire tower on the south peak, shining in the moonlight. He went back two weeks later to examine the tower up close and got a good look at how dire the situation was. “The tower was covered in two dozen turkey buzzards and a sign that said ‘Volunteers Needed.’” he recalled.

Rocco became involved with the fire tower restoration as construction work on the Walkway in Poughkeepsie finally got underway. With the old railway that formed the base of the walkway being dismantled, Rocco was able to arrange to have the materials from the railway donated to the fire tower. “We were able to transfer materials from one iconic Hudson Valley project to another,” he said.

Or at least, they tried.

“At first we tried carrying the steps up ourselves,” said Antony Tseng, who served on the restoration committee and is currently a member of the Beacon Volunteer Ambulance Corps (BVAC). “It was slow going.”

“Then during one of those trips, a Jeep suddenly pulls up next to us with ‘Mount Beacon Fire Tower Restoration Committee’ on the side of it,” recalled Rocco. “And I said ‘Wait a minute, who are you?”

The men driving the jeep, James Burns and John Bisson, were members of a local Jeep club called Hudson Valley 4 Wheelers and they were there to help. The club spent the next six weekends helping out, and they did more than just drive steel up the rock face. Many of them helped with the actual restoration work of the tower itself, since off-roaders tend to be mechanically inclined by necessity.

“If their Jeep breaks down on Mount Beacon, AAA is not going to come up there and help them,” said Rocco. “They have to know enough about mechanics to be able to fix things themselves.” 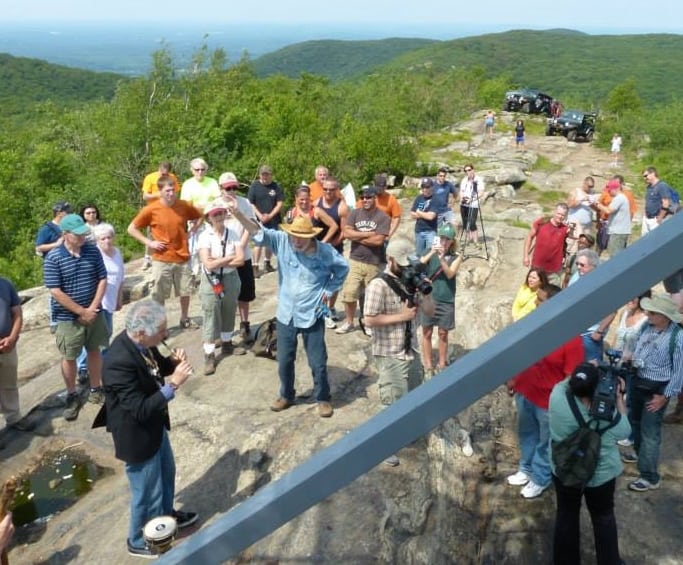 Pete Seeger arrives at the rededication ceremony of the Beacon Fire Tower on June 22, 2013.

Rocco got permission from the Department of Environmental Conservation (DEC) for the Jeeps to assist with the restoration. (To further illustrate the bureaucratic patchwork that complicates legal matters on Mount Beacon: While the rock that the tower sits on is owned by the Parks Department, the tower itself is owned by the DEC.) And when the rededication ceremony rolled around, the club helped ferry attendees who couldn’t make the hike up the mountain — including mountain resident Pete Seeger himself.

“We thought it was a nice trade-off,” said Rocco. “We get the help, and they get to drive around up there and have fun. I don’t mind guys driving to the fire tower and having a few beers. The view up there is awesome. Just clean up your mess when you’re done.”

Rocco knows that if it’s the Jeep clubs up at the fire tower, there won’t be a mess when they leave. The clubs have a habit of bringing empty trash bags with them on the way up and filling them up with litter on the way down — including the water bottles and sandwich bags left by hikers. “They shouldn’t have to do that,” said Rocco. “People used to keep it clean up there.”

For Tseng, the situation is a complicated one. He’s worked with the Jeep clubs to restore the fire tower, and even had them help him once when the BVAC’s own off-roading vehicle, a UTV used for mountain rescues, got overturned. But he’s also seen what happens when irresponsible off-roaders head up the mountain.

Last month, Tseng and a fellow volunteer took the UTV up the mountain to respond to a lost hiker call. As it was getting dark, Tseng turned on the UTV’s flashing red and blue lights. When they encountered an unfamiliar Jeep on the road, the Jeep drivers assumed Tseng was with the police and was coming after them for being on the road illegally. They immediately tore off at top speed and promptly got stuck in a ditch, blocking the road and hindering the rescue effort.

On top of that, Tseng is also a chair of the City of Beacon’s Conservation Advisory Committee. If anyone has to view the issue from all sides, it’s him.

“We need the talent and resources of the Jeep clubs,” he said. “But we also need the conservation of the hiking trails and to be able to get emergency services up and down the mountain. I hope this is the beginning of a conversation that needs to happen. Hikers need to be responsible. Drivers of motorized vehicles need to be responsible. Unfortunately there’s going to be knuckleheads on both sides.”

“There’s a lot of good people up there,” agreed Rocco. “And then there’s bad people who ruin it for everyone else.”

2 thoughts on “Fire and Rescue on the Mountain”