Senior citizens mingled with young children last Thursday (April 16) to share stories of their youth at Philipstown … I Remember, an event created by local residents Dar Williams, Nancy Montgomery, Ivy Meeropol and this writer. Montgomery kicked off the event by introducing Rowan McLaughlin, who discussed aspects of the year 1955, ranging from popular culture to how much a gallon of gas cost. Williams then took the stage with Ray and Christine Bokhour to sing “Only You,” a popular hit from 1955.

Bob McCaffrey, Donald MacDonald and Anthony Merante shared their stories, as children continued the conversation with probing questions such as “What were hairstyles like?” and “Did people ice skate on the Hudson River?” 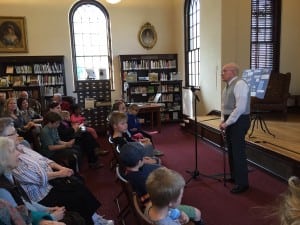 “There is something special about getting the people who lived here in a moment where they’re all remembering something and filling in the pictures for each other,” noted Williams. She added, “It’s amazing when someone like Bob McCaffrey says that he had a cousin, aunt or uncle on every street in Cold Spring, or an animated daughter remembers her mother reminiscing about how kids could sled on their lunch boxes all the way down to their houses after school [in Manitou] — or even how [before 1955] they drove cars, even raced cars, across the Hudson River.”

Guests enjoyed snacks from the same time period while viewing posters, pictures, books and artifacts from the era.

Stacy Labriola, who attended the event, also pointed out: “It was such a positive family/kid-friendly event … I especially liked having an event that celebrated and involved the senior citizen community. We are reminded how valuable their memories and experiences are.”