Illegal vehicle use continues on Mount Beacon and Fishkill Ridge

Beacon resident Joe Allen had gotten so used to seeing tire tracks on the trails that run along Mount Beacon and Fishkill Ridge that he didn’t think anything of it. “I had seen ATV tracks and trucks so much that I just assumed it was allowed,” he said. “It wasn’t until I started emailing Scenic Hudson that I found out that it’s illegal.”

That may also come as news to the scores of drivers of all-terrain vehicles, which can often be seen and heard on the trails. But Geoff Carter, the parks and stewardship manager for Scenic Hudson, was happy to clear the air: “It’s against the park rules and it’s against New York state laws.” He said the main concern with illegal vehicle use is that it endangers the safety of hikers and threatens the habitats of the wildlife who call the mountain home.

Scenic Hudson currently maintains the majority of the trails on Mount Beacon and Fishkill Ridge. Allen had contacted the group over concerns that many of the trails, particularly the one that leads from the casino ruins to the fire tower, were being irreparably damaged by traffic.

“That trail is such a delicate little path,” said Allen. “But now it’s a gashed out mess of tire tracks. It’s sad that we have so many tourists who come here to hike Mount Beacon, and that’s what they see.”

It’s a common complaint echoed by hikers who have seen ATVs and Jeeps tearing up the trails and wondered why someone isn’t doing something about it. But the issue of enforcement up on the ridge is a complicated one, and the roots of the problem run deep.

People have been driving up on Mount Beacon essentially since the invention of four-wheel drive. Long before the formation of Scenic Hudson, Beaconites would run trap lines on the mountain, camp overnight and even haul up building materials to construct their own makeshift cabins. In the ’60s, local gearheads would strip down Volkswagen Beetles, convert them to dune buggies and roll around on the mountain to their hearts’ content.

“You’re talking about behavior that’s been going on for decades,” said Douglas Solomon, Beacon’s chief of police. “It’s kind of a tradition.”

But the amount of illegal vehicular traffic has been increasing, and many of the drivers aren’t exactly being covert about it.

Indeed, a quick scroll through the most recent months’ worth of photos on Instagram with a #MtBeacon hashtag reveals several shots of Jeeps majestically perched on the casino ruins and even parked under the fire tower. While out hiking, Charlotte Guernsey, who has lived on the mountain for 10 years and knows its trails as well as anyone, has come across Jeeps making the fire tower climb while out hiking. She said that the trail’s difficulty is the secret to its clandestine appeal. 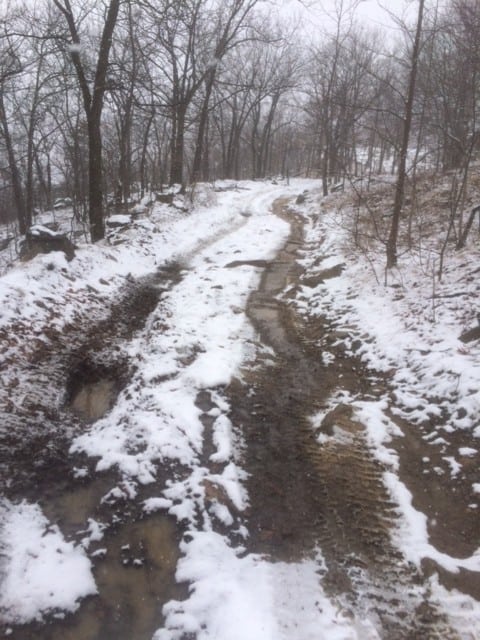 “That trail is basically a Jeep commercial,” she said. “They have to crawl straight up the rock face to get there. Meanwhile I’m just cringing while I’m watching them because they all look like they’re about to fall over backwards.”

In order to combat the growing problem, Solomon and Beacon Mayor Randy Casale recently met with Carter and law enforcement officials from Fishkill and the New York State Parks Department to discuss options. One of the main obstacles to enforcing the law is that the trails pass through lands controlled by several different parties.

Mount Beacon, for example, isn’t entirely in Beacon. Much of it, including the reservoir and most of the access roads, is technically in Fishkill. “The City of Beacon gets the brunt of the complaints when something goes on up there because everyone associates Mount Beacon with Beacon,” said Solomon. “Which seems obvious. But once you go a hundred feet up Monument Road, you’re out of our jurisdiction. And once it’s on Scenic Hudson lands, it’s technically their problem.”

That doesn’t help matters, considering that Scenic Hudson doesn’t have the authority or capacity to apprehend lawbreakers. “We don’t do a lot of high-speed chases,” said Carter.

This summer, however, Scenic Hudson will be turning over both the lands and the trails that it currently owns on Mount Beacon and Fishkill Ridge to the state. That means that the land will be under the stewardship of New York State park rangers — who know the trails intimately and have both the capacity and the jurisdiction to enforce the laws banning unauthorized vehicles.

There is also the issue of road access. While ATVs are completely prohibited, the service road that begins as Monument Road is open to car and Jeep traffic for those who live on the mountain, technicians who service the communications towers at the summit, Beacon city workers and Central Hudson. Solomon estimated that approximately 30 legal trips a day are made on that service road. “It’s a difficult road to shut down access to,” he said.

An open gate remains in place at the base of Monument Road. In the past a padlock had been put on it, and only those with legal access to the roads were given a key. But the lock was often intentionally broken by vandals, trapping people up on the mountain and preventing others from opening the gate. This proved particularly problematic one day when Guernsey encountered someone on the mountain in a life-threatening emergency. “In instances like that, police need to be able to get up here quickly,” she said. “That day they couldn’t because the gate was broken.”

Despite the difficulties, Solomon said that his department was committed to heading up the mountain this spring to actively try and tamp down the problem in a way that hasn’t been done in years. They may not have to do much to make an impact. Guernsey remembers the last time the law was actively enforced, about 10 years ago. Justice was swift and harsh.

“They started taking people’s quads away,” she said. “Things got real quiet after that. Word travels fast in those circles.”

See related story: Fire and Rescue on the Mountain

28 thoughts on “Tracking Danger but Trailing Behind”