‘I realized how funny the script was and also how poignant’

The Depot Theatre’s creative director, Nancy Swann, stumbled upon a production of On Golden Pond about three years ago at Jeff Daniels’ Purple Rose Theatre Company in Michigan. She immediately thought of it as “a perfect fit for the Depot. It had a small cast, and five of the six actors were over 40. Since our talent pool tends to be a little light in the 30 to 40 range, I thought it would be easy to cast. I also realized how funny the script was and also how poignant. It deals with age and family relationships. You know what happens when you go back home to a house you grew up in with your parents, and suddenly you find yourself acting like a 10-year-old no matter how much inner work you have done on yourself? I thought that was something we could all relate to.”

Now that thought has been translated into something tangible, as a Swann-directed production of Ernest Thompson’s play opens at the Depot on May 1 for a three-weekend run. Longtime, real-life married couple Joe Carlisle and Nancy Larsen are taking on their Maine counterparts, Norman and Ethel Thayer. 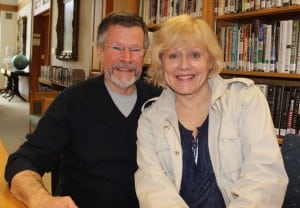 Joe Carlisle and Nancy Larsen, married offstage and on, star in ”On Golden Pond.” (Photo by A. Rooney)

Carlisle feels a kinship with his character: “Norman is sort of a crotchety guy and so am I,” he joked. “Actually I think there’s a lot of humor and a literate quality to the dialogue — they talk like we talk.” Larsen concurred, “There’s the ribbing that couples do, the testy exchanges.”

Swann thinks that working with a married couple adds quite a bit to the play. “The relationship and time spent together is already there. … Nancy and Joe bring their whole life together as a married couple to this play. Their humor and their familiar bickering that a couple develops over time does not have to be rehearsed. It has added a depth to the production and has made my job much easier.”

The play consists of five scenes, each with a time lapse of a month between them, and each almost a little play in and of itself. The play begins with the Thayers opening up the lakeside cabin for the 48th time. The couple’s daughter, whom they have not seen in eight years, returns, bringing her boyfriend’s young son along with her and dropping him off. There is much intergenerational pushing and pulling, some of it relating to aging and concerns about dying, some involving the stresses between adult children and their parents.

For those who have seen the film, featuring screen icons Henry Fonda and Katharine Hepburn, the play has its similarities and differences, Swann said. “The film was able to take you outside of the Thayers’ cabin and give you a feel of living on a Maine vacation lake. The thrill of being 13 and taking the controls of a motorboat, gassing up the boat and running into a few locals and diving and swimming in the lake. Of course you are limited to the interior of the cabin onstage, but the relationships and dynamics are still the same. 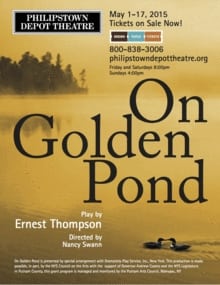 Chris Nowak’s backdrop of Golden Pond fleshes out that visual. It helps the audience feel like they are sitting in a house on a lake watching the lives of a family who have been living in discord for eight years finally mend. That is the heart of the story on stage as well as film.”

Swann, Carlisle and Larsen share a long theatrical history between them. Carlisle is also a playwright, Larsen has directed and, between the three of them, there have been many iterations of the writer-director-actor triangle. Larsen noted: “We’re friends, so you try to keep on your side of the fence and not give input if you’re the actor. Nancy [Swann] can read us, and she’s sensitive if, for instance, Joe gets put out about something. And Nancy could do my role herself, so I really do listen to her.”

Added to the familial nature of it all, Swann is working with other actors who have been in her last two productions. “Ken Straus, who is playing Charlie the mailman, was in my production of To Kill a Mockingbird as well as my Atticus, Steve Andresen, who is playing Chelsea’s new boyfriend, Bill.” Vanessa Freeman and Bryce Edwards were both in 1776, Swann explained.

Carlisle feels that most audience members will be able to identify with at least one, if not more, of the characters. Of his, he said: “Norman feels he’s losing relevance, padding about, getting more and more irritated. But he becomes rejuvenated, finding things in the natural setting of Golden Pond.”

The real challenge for Carlisle is embodying the age of his character. “You can’t pile on old-age makeup in such a small space, and the goal is to convey without falling into stereotypical things … It’s a very sardonic play, with lots of wisecracking. In the movie, they weren’t acting old — they were old. The challenge here is to portray that dynamic. And this is definitely not as gooey as the movie.”

Larsen agreed: “James Earl Jones did it on Broadway, and the reviews mentioned that, with him, the schmaltz got cut and the play became much funnier. We’ve still got schmaltz, but not excessively.”

Many locals are involved in the behind-the-scenes creative side of this production: Chris Nowak designed the set, Michael Mell the lights and Raquel Vidal the costumes. Tyler Mell serves as stage manager and prop master.

On Golden Pond will be performed on Friday and Saturday nights at 8 p.m. and on Sundays at 4 p.m. Evening tickets are $25 for adults and $18 for seniors and students and Sunday matinee tickets are $15. Tickets can be purchased at brownpapertickets.com.

Garrison Cafe is offering an On Golden Pond themed dinner on May 1 before the 8 p.m. show, with seating between 5:30 and 6:30. Call the café at 845-424-8300 to reserve a table. Select from two appetizers and two entrees, or order off the regular menus. Drop-ins are welcome, but seating is limited.