Tree fans of all ages gathered on Main Street at noon Saturday (April 25) to celebrate Arbor Day, spreading mulch and, they hoped, goodwill in the community.

Boy Scout Troop 137 and Girl Scout Troop 1405, joined by younger children, turned out along with Cold Spring Mayor Dave Merandy, Trustees Marie Early, Fran Murphy and Cathryn Fadde, members of the village’s new Tree Advisory Board, proud parents and the public, grouping around two small, new London plane trees on Main Street. The village Highway Department and Habitat Revival, a local landscaping business, had installed the trees in advance on the verge between the sidewalk and street in front of C & E hardware store and a block east near the Sunoco gas station. 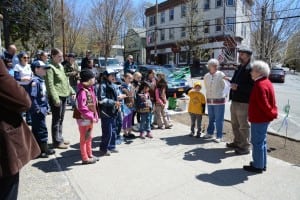 Merandy thanked the youngsters for their assistance in providing both and proclaimed Arbor Day in Cold Spring, which thus joined communities around the nation and world in taking part in the 143-year-old thank-you to trees.

The mayor cited trees’ virtues in producing oxygen, cleaning the air, preventing erosion, protecting drinking water, cutting energy costs by offering shade and mitigating the ill effects of climate change. “Trees in our village entice visitors to stroll and shop along the streets” of the business district “and add to the beauty of Cold Spring’s historic byways, waterfront and parks; increase property values; create pleasant walking environments in our neighborhoods; and help provide a buffer from traffic,” Merandy said. “Trees, wherever they are planted, are a source of joy and renewal. I urge all residents to celebrate Arbor Day and to support efforts to protect our village trees and woodlands.” 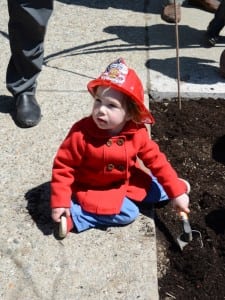 Troweling away on Arbor Day

In a news release, the Tree Advisory Board described the event as “a chance for the community to come together and take pride in the beautification our streets” and pointed out that holding an annual Arbor Day observance helps the village qualify for Tree City USA status, which aids in obtaining grant funding.

Along with labor, Habitat Revival contributed a new London plane and the mulch that the scouts and younger children spread. They began with the tree at the hardware store and then brought their trowels, rakes and other essentials up the street to the second tree. “Oh here, I’ll help you,” one girl called out to another, who lugged a heavy bucket of mulch.

In between supervising mulching operations, Tony Bardes, owner of Habitat Revival and Tree Advisory Board vice chairman, surveyed the scene with satisfaction. “I’m looking at this as a bridging opportunity for everybody to get together,” he said. “You’ve got people from both sides of the [political] fence here. I think it’s really cool.”

Jennifer Zwarich, who chairs the Tree Advisory Board, added, “It’s nice to have good energy.” She said that before the event, other residents had asked her about donating trees, “which is a good outcome of all this.” She asked anyone wishing to provide a tree other assistance to contact Cold Spring Village Clerk Mary Saari (845-265-3611 or [email protected]).

In the days preceding the ceremony, along with potential tree donors, a few naysayers emerged, at least on social media, Bardes said, to disparage Tree Advisory Board efforts as a business-boosting ploy for him. “Some people have got nothing better to do” than gripe, he observed. 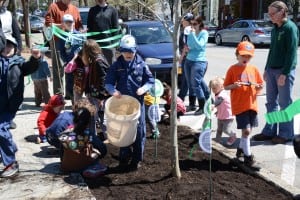 Young arborists smooth the ground under the first tree.

An Arbor Day attendee, former Trustee Stephanie Hawkins, mentioned in an aside that another village sapling — the notorious “Larry” was planted on a village street last fall. A red oak, “Larry” came to fame after being stricken with a fungus and taken to Hawkins’ house last spring for nurturing. She dubbed it “Larry” but found her nursery-style nursing under attack at a subsequent Village Board meeting. On Saturday, Hawkins told Philipstown.info that Larry had survived “and he’s blooming; he’s budding out.”