Nelsonville anticipates spending $300,373 in fiscal 2015–16, down 19 percent from the previous year, according to a draft budget provided at a public hearing by the Nelsonville Village Board in its village annex Monday night (April 20).

The evening also brought the swearing-in of new Trustee Danielle Pack McCarthy, and the budget discussions included her suggestion that Nelsonville join a new Cold Spring village committee to explore grant possibilities and audience questions about deficiencies in snow removal this past winter. 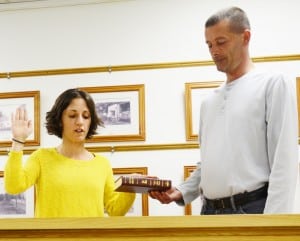 During a regular meeting after the budget hearing, Mayor Tom Corless called for watchfulness following the discovery on Nelsonville streets of hypodermic needles from heroin use and reminded residents when summoning law enforcement to call the New York State Police or Putnam County Sheriff’s Department – not the Cold Spring Police Department, which does not serve Nelsonville. The mayor also explained the situation regarding the Sheriff’s Department’s use — rent-free — of the old Nelsonville firehouse and his temporary residency in Cold Spring.

Under the proposed budget, the village anticipates $289,598 in revenue and intends to tap $10,775 in savings to make up the difference between income and spending. The village fiscal year runs from June 1 to May 31. After the meeting, the board scheduled a follow-up session for Wednesday (April 29) at 6:30 p.m., at the Village Hall, to formally adopt the budget, which must be approved by May 1.

A resident expressed dismay at the quality of snow removal, compared to Cold Spring, which shares some streets. “You could see a line where Cold Spring began and ended, by the black [cleared] street and the white [uncleared] street,” she complained. “Secor Street was quite messy. Division Street was high with piles so people were skidding off into the bank.” She cited dangers and potential legal liabilities “if our streets are not done properly. If the other people” in Cold Spring “can do it properly, we should also,” she told the board.

Corless promised to raise the issue with the contractor who handles snow and street needs.

Pack McCarthy pointed to Cold Spring’s plans to create a committee to seek grants. She suggested that Nelsonville participate, too, so the two “maybe have some overlap there … and hopefully our village benefits as well” from the research and any funding it produces.

Neither Corless nor Trustee Will Duncan objected, although the board took no formal action on the idea.

The board also spoke of an incident in which a Nelsonville resident called the Cold Spring Police in a perceived emergency, only to learn that she should notify the state police or sheriff’s department instead. 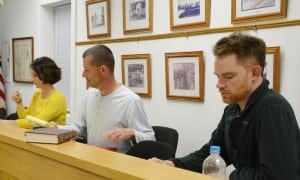 An investigator with the Sheriff’s Department, he also said the presence of needles in public places indicates the heroin crisis has hit Nelsonville, too. “Nobody’s immune to it. Be vigilant,” he advised residents. “With heroin comes burglaries, stealing, you name it. Call the police, whatever number you choose,” he said. “I think we all agree we’d rather see these kids in jail than dead.”

The mayor acknowledged that he “does not, absolutely not” currently live in Nelsonville, having moved “down the street” into Cold Spring in December 2013 while working on an addition to his Nelsonville home. He had also been upgrading the Cold Spring house and with one development or another — including news of a baby on the way — “things have not gone as planned, on my agenda,” he said. “So that’s where I’m at. I’m in the middle of getting back up here [to Nelsonville] as quickly as possible. I don’t want to be down there anymore than anybody else wants me.”