Local garden organizations are taking up the cause for the survival of butterflies and bees. At their upcoming plant sales, both the Philipstown Garden Club and the master gardeners from Cornell Cooperative Extension are hoping to get native plants that provide habitat for monarchs and pollinators into more home landscapes.

After years of declining numbers, with the lowest numbers of monarchs counted in their winter habitat in Mexico in 2013, in 2014 there was some rebound in the population. Regardless, a U.S. Forest Service report from last month called monarchs “vulnerable to extinction” and critically imperiled. The U.S. Fish and Wildlife Service is conducting a yearlong study right now to determine if monarchs will qualify for endangered species protection.

It’s easy to take the natural landscape for granted and forget the role that each of us plays in either contributing to its decline or conservation. It’s hard to imagine that monarch butterflies would go extinct and we wouldn’t see another one. They’re iconic and beautiful and at one time, probably prolific enough that we forgot to stop and take a close look. 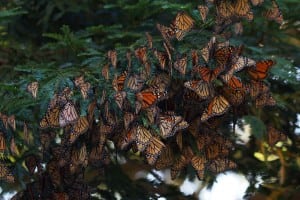 Monarchs at their winter habitat in Mexico

As our climate has warmed and changed, as agriculture has increasingly sprayed herbicides and pesticides and fertilizers, as land was developed and forests became more scarce, among other things, the conditions that supported monarchs’ migration across continents have been destroyed or altered too drastically to support their continued well-being.

As with many problems that seem too big to influence on an individual level, it’s easy to hope that someone else will do something and not take action oneself. The government that should pass regulations, the agri-business corporations that should stop dumping poisons on the land and in water, the nonprofit environmental groups that we give money to — surely someone will do something.

In their efforts, the Garden Club and the master gardeners want to spread the word that each of us can do something fairly simple. We can plant different kinds of plants in our yards.

Native plants, particularly those that sustain butterflies and bees, are getting renewed interest because of their role in creating habitat. Elise LaRocco, a Garden Club member, said: “We’re focusing on a lot of milkweed. Asclepias tuberosa or butterfly weed and Asclepias incarnata or swamp milkweed are two native milkweed plants that support monarchs.”

Monarchs need specific milkweed plants to lay their eggs on, and then the larvae will eat the plant as its main food source. One problem with the monarch population decline is that many people planted tropical milkweed or Asclepias curassavica. That had a tremendous impact, but the wrong kind.

Tropical milkweed caused new problems. Although the monarchs would lay eggs on it, the plant didn’t die off in winter in warmer climates along the monarchs’ migration in the southern U.S. Monarchs started overwintering before they got to their grounds in Mexico. It made them weaker, and the plant harbored a parasite that would cover the larvae when they emerged. This contributed to monarch declines, too. It was a hard lesson in the value of native plants.

LaRocco said that the Garden Club Plant Sale on May 9, at North Highlands Fire Department, 9 a.m. to 1 p.m., would include dozens of native plants that are useful for both bees and butterflies. Declines in populations of pollinators have been severe, and at least part of the solution is to create better habitats for them.

Bees also have specific needs for food and shelter that we can create in the landscape. Native bees, honeybees and other types each have certain plants that they seek out, and they need pollen sources throughout the season. Think of creating a bloom schedule for plants that are available in the yard for bees during each season — spring, summer and fall.

The Master Gardener Plant Sale on May 16 in Brewster will have its first “Beauty and the Bees” booth to educate and promote native plants and their important role in the landscape. Janis Butler said: “We’re hoping to offer several hundred different types of native plants. They’ll be cordoned off with tags. Suppliers are hard to find, sadly. Tracking down some of these plants is very difficult.” Butler said they’re focusing on native plants that benefit insects and hoping that more people will begin asking their local nurseries to stock them.

These are two terrific opportunities to stock up on native plants that aren’t found in many local nurseries. Many would have to be mail-ordered. Prices will be very reasonable, too. LaRocco said that they were offering one milkweed for $3 or three plants for $8. My best advice for shopping at either plant sale — get there early.

One thought on “Roots and Shoots: A Little Milkweed Goes a Long Way”