Perhaps it was the June moon, or a finer rhyme than that one, but for all who have ever wished for things to have worked out differently for those ultimate star-crossed lovers, Romeo and Juliet, here is that happy ending at last: Angela Janas and Carl Howell, who played the doomed pair in the 2012 Hudson Valley Shakespeare Festival (HVSF) production, have announced their engagement.

Speaking as one, they write of that summer just three years ago:

We both recognized a connection very early on, almost immediately, but were aware that we had four months of working very closely together, and didn’t want to have anything interfere with the enormous professional opportunity ahead of us, not to mention the difficulty of playing those roles well. We remember feeling that our developing offstage relationship was kept very separate from our onstage job. We also thought we were doing a very good job of keeping it a secret from the rest of the company, in an attempt to remain professional and private, but it seems things were pretty obvious.

The latter proved to be correct as that production’s director, Chris Edwards confirmed: “I noticed it right away and often gave them a ribbing that ‘I get to name the firstborn.’ They are amazing and two of my favorite young actors.” Two of their co-stars in that production, Katie Hartke and Ryan Quinn, were also in on it: “It was clear from moment 1 that they had a great affection for each other that started in the rehearsal room and carried onto the stage. We (the cast and crew) all had an idea and hope from very early on that they might wind up together. We all secretly rooted for them because they seemed so perfect together,” said Hartke.

The couple first met at the audition. Howell recalled:

I was the reader, and also officially auditioning for Romeo, and Angie was one of about six Juliet contenders for the day. We both recall Chris Edwards saying that what made our interaction so unique and special was that we seemed to ‘take care of each other’ in the audition scenes. Within two minutes of shaking hands and introducing ourselves, we were reading the ‘palm to palm’ Romeo-meets-Juliet scene and kissing. I think, having never met before, we were both nervous about it, as any two young kids about to kiss for the first time would be … Angie had flown in the day before from Minneapolis. I had very long hair and probably looked a little like George Harrison. Angie had on a green dress.

HVSF’s costumer designer, Cold Spring’s Charlotte Palmer Lane, said of the couple: “I have known Carl since he was an apprentice in Twelfth Night, in 2008, which was also my first show with HVSF … A costume designer’s relationship with an actor is very intimate by nature as you are providing the clothing that builds the character the actor is portraying. I could not have had the pleasure of dressing two more lovely people than Carl and Angie, and they really connected during the rehearsal process, giving a true depth to their performances. Not to sound trite, but they are a perfect match.” 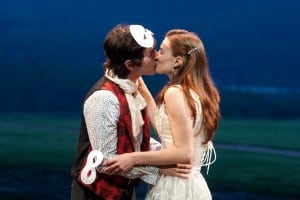 The onstage romance, which led to the offstage version with a much happier ending (Photo by William Marsh)

Janas is originally from Lino Lakes, Minnesota, and Howell from Hammonton, New Jersey. Janas studied at the University of Minnesota/Guthrie Theatre BFA Actor Training Program before coming to HVSF in 2012, and Howell trained at New York University’s Tisch School of the Arts before starting at HVSF in 2008 as an apprentice.

Since Romeo and Juliet, local audiences will also remember Janas as the spunky wanna-be swashbuckler Sabine in The Three Musketeers at HVSF in 2013, also directed by Edwards. Janas then spent two seasons touring with the Acting Company, playing Ophelia and Lady Macbeth all across the country, highlighted by longer stays at the Guthrie Theatre in Minneapolis and off-Broadway at the Pearl Theatre in New York City.

After playing Romeo, Howell went on to play Prentiss in the first national tour of the Tony Award–winning Peter and the Starcatcher, codirected by Roger Rees and Alex Timbers. He toured the show to 22 cities around the country, including Los Angeles and Chicago. He then played Francis Flute, the bellows-mender, in A Midsummer Night’s Dream at the Repertory Theatre of St. Louis. 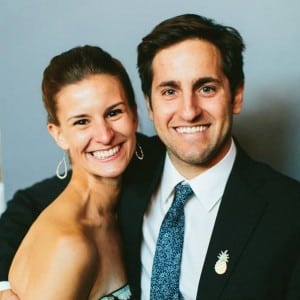 The couple has not set the wedding date yet; they are currently scoping out possible venues in the Cold Spring/Beacon area — everything from parks to farms. They said: “While nothing is set in stone, we’d really love to get married in the Hudson Valley, since that’s where we met and fell in love, and also because it’s so beautiful and natural, away from city life, while still allowing our New York friends to travel there easily and inexpensively.” There will be no need for separate-sides-of-the-aisle seating for Montagues and Capulets.

The couple plans on living in the Washington Heights neighborhood of Manhattan, where they currently reside. 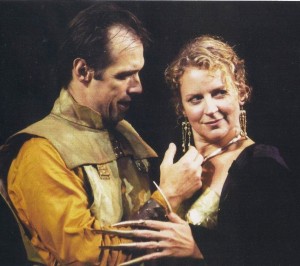 Wherever their paths take them, they would be wise to listen to some reflections and sage advice from one who has lived this script himself, . He and his wife, Nance Williamson, make up HVSF’s “leading players” who between them will be celebrating 33 years on that stage (and 31 years wed offstage) this summer.

We love the tale of their storied meeting in Romeo and Juliet. Nance and I met doing As You Like It (Orlando and Rosalind) at the Dallas Theater Center in 1983, and that play has always been charged with such energy and vitality for us. The play was (and is) a conduit for an intimate connection between us. I’m sure Romeo and Juliet is the same for Carl and Angie. What a gift when plays are the canvas that capture the tender and exhilarating moment of falling in love. My advice: Never miss a cue or entrance when working together … you will never hear the end of it.

In the ultimate actors’ revenge, Howell and Janas get the last laugh: “One reviewer noted that the production didn’t totally work because the actors playing Romeo and Juliet had no chemistry. Well, we’re getting married! So, take that!”