Jake Holmes has been around songwriting for a long, long time, and he can separate the wheat from the chaff pretty easily. At the Songwriter’s Circle once-a-month evenings he’s been organizing and hosting at the Towne Crier for the past year and a half, he’s chosen the talent carefully, making certain that there is plenty of it in each of the three singers who perform at each edition.

The tagline description reads: “Our showcases feature the best of local and regional talents that deserve the attention of a wider audience; and a wider audience deserves the pleasure of their music too, so come check it out!” Holmes describes it simply as “my desire to bring people I really love and admire up here, exposing them to the community … I try to keep the level high so when you go there you know you’re going to hear a really good songwriter.” 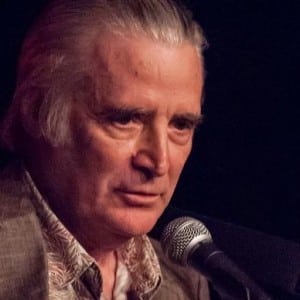 Holmes, a songwriter who penned his first tunes back in the ’60s, started playing in clubs like the Bitter End, starting in a “folk-rock parody duo,” sharing the stage with, on occasion, the then semi-obscure Jose Feliciano, Van Morrison and Joni Mitchell (not all together), then formed a revue-music trio called Jim, Jake & Joan — the Joan being Rivers, which did sketches with music integrated into the comedy. He then turned to solo performing, first with comedy and then with music, for the first time writing songs for himself. Eventually, signed by EMI/Tower Records, he released his first (of five) albums, The Above Ground Sound of Jake Holmes.

From the ’70s onward, Holmes focused more directly on lyric writing, providing the words for songs recorded by Frank Sinatra (lyrics for all the songs on the concept album Watertown), Nina Simone, the Four Seasons and Harry Belafonte, for whom he wrote an entire album’s worth of lyrics on Paradise in Gazankulu, which was devoted to the issue of apartheid in South Africa. Along the way, he wrote the song Dazed and Confused, which was “borrowed” by Jimmy Page for the Yardbirds and then the first Led Zeppelin album; one can read multiple discussions and outrage about this online.

With the advent of other forms of pop music taking hold of the charts, Holmes, after testing the waters of cabaret and theater, turned to writing jingles, becoming extremely successful at it, creating such catchphrase advertising slogans in song form as “Be All That You Can Be” for the Army and “Be a Pepper” for Dr. Pepper, among hundreds of others.

He currently continues to work in multiple forms, co-authoring a musical about baby boomers, The Thing About Time with David Buskin, writing songs independent of that and working on poetry — he was also active in the slam poetry scene in the ’90s, reading his work at the Nuyorican Poets Cafe.

There there’s the hosting and organizing of the Songwriter’s Circle nights. Asked how he finds his performers, Holmes replied that usually he has already found them, familiar with their work from attending many performances, both in the city and the Hudson Valley, and frequenting open mics to check out those less prominent and/or newer to the scene. 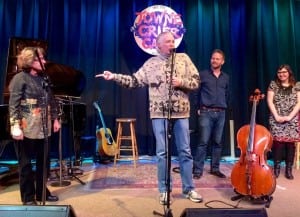 That there’s an abundance of talent hereabout, Holmes is certain, reeling off the names of people who have performed in these shows: Todd Guidice, Kathleen Pemble, Cat Guthrie, Peter Calo and Mark Westin along with newcomers Eva Rubin and Travis Norman.

During the course of the evening, which always consists of three singer-songwriters plus Holmes himself playing his own material, Holmes — at the suggestion of Towne Crier owner Phil Ciganer — asks the performers questions about how they write, what they think about, etc. He finds this makes the audience much more receptive to the music and the players: “They become people, not just songwriters. It’s insightful.”

Holmes believes that songwriting is, inevitably, a little different now from then. “I wish there was a little more personal writing, writing which looks into the community. In my dotage I like to be able to teach, help people find their own voices. My sneakiness in asking questions is sometimes about what we do to find our voices.” He thinks there is a regional flavor to Hudson Valley writing, an Americana kind of folk, with “even the rock kids a little more rootsy.” As to why singer-songwriting remains a popular “genre,” for lack of a more purposeful description, Holmes thinks “a lot has to do with simplicity, directness … more specifically, the lyrics do matter, it’s not pop. All the songwriters are really lyric-oriented.”

Holmes hopes that the current abundance of music spots in and around Beacon continues to thrive and grow. He doesn’t view it as competitive, in the negative sense of the word. “Increased venues for music are a good thing. Look at how collective things are in the city; there’s a flower district, bookstores near each other — everything stimulates the others. Someone can come to a songwriter night and then head over to Quinn’s across the street, making it a late night. We shouldn’t be competing; we should make it a music center.”

Songwriter’s Circle at the Towne Crier takes place once a month, during the first week of the month, sometimes Thursdays, sometimes Sundays; the next edition, featuring Guidice, Pemble and Norman, is on May 7.