Back in her homeland of Mexico, Eva Rojas grew up on corn tortillas made with fresh masa. She learned to love the textured tradition of the family diet and ate tortillas dressed with everything from avocados to tomatoes.

She still savors warm tortillas and prepares them at home in her Cold Spring kitchen. She also keeps them on hand to share with the children she cares for at ABC Soup Day Care. Not only are the corn tortillas gluten-free, but they’re not messy or sticky, and the children shine when she offers them as an occasional snack. 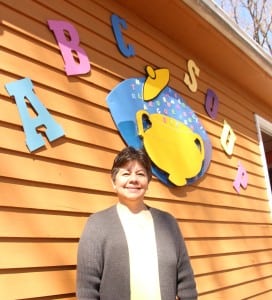 “When I make tortillas, I make a lot of them,” Rojas said. “I always made them for my children when they were growing up.”

It was right about this time last year, with a nod to Cinco de Mayo, that she shared a batch of her tortillas with a few staff members at The Paper. Fellow scribes in attendance at that Monday morning staff meeting — sorry Tuesday staffers — finished these off while they were still steamy. Rojas’ guacamole and salsa vanished quickly as well.

To recreate the traditional food she learned to make in Mexico City, Rojas prefers fresh masa. It’s prepared through a process where corn seeds are dried and treated with a powdered-lime-and-water solution, then boiled to loosen and remove skins to prepare this stage of the corn, the nixtamal, and finally ground. But the fresh corn dough isn’t readily available at every corner market in New York like it is back in Mexico, so she uses masa harina, corn flour, as a substitute. 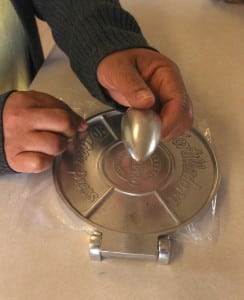 “In Mexico, in many places, they make the masa freshly ground every day. You can buy tortillas or one or two pounds of the masa,” she said. “It’s fresh and if you buy it, you are usually going to use it right away.”

She’s taught me how to replicate her tortillas using a small tortilla press. Ambitious cooks who want to start making tortillas right away can get by without a press by using standard kitchen plates to help flatten the dough. She recommends cooking tortillas with a comal, a flat griddle that is typically used in Mexico. If you don’t have one, any griddle or cast-iron pan will do. And with dough in general, consistency is paramount.

“You have to add the water little by little,” Eva said. “But it has to be warm, not too hot. You keep adding until the consistency is good.”

Once the consistency is right, form the dough balls and press on. Depending on the size of your griddle, cook one or several tortillas at a time. The tortillas also take on a crunchy dimension when fried, and fried tortilla strips serve as the foundation for another revered Rojas family dish: caldo de jitomates (tomato soup). Using three tomatoes, one garlic clove, the juice of half a lemon, a sprinkle of salt and just a pinch of fresh cilantro, blend ingredients. In a small saucepan, heat the tomato mixture until it bubbles and reduce the heat to low. 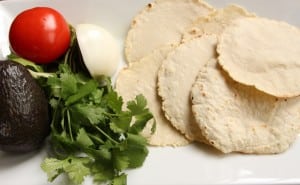 The colors of the flag of Mexico — green, white and red — inspire a recipe for classic guacamole.

After grilling several fresh tortillas, allow them to cool to the touch, then slice the tortillas into strips. In a few tablespoons of canola oil, fry the strips for two minutes and remove them from the pan. Layer the fried strips in a bowl, top with the tomato mixture and add a spoonful of sour cream to the broth-covered tortillas.

The caldo is a miniature feast, but tortillas and guacamole make the perfect match. Everyone seems to have their own recipe for the bright green dip, but to turn out her own Mexican guacamole, Rojas leans to inspiration from the Mexican flag, which is green, white and red and emblazoned with an eagle.

“The white is the onion, the green is the avocado and the red is the tomato,” she said, “and you have the colors of the Mexican flag.”

With three medium Hass avocados, one medium onion and tomato, juice of half a lime, three quarters of a bunch of cilantro and salt to your liking, mix up colorful guacamole. (After pitting the avocado, don’t toss the seed. If placed in prepared guacamole, it will prevent browning.) Rojas recommends mashing avocados with nothing but a fork. Mash, mix and pass the tortillas.

Thoroughly whisk corn flour and salt in mixing bowl. Gradually add warm water and mix. Dough should be moist with elastic consistency. Knead dough in bowl. If dough is too dry, add warm water by the tablespoonful.

Divide dough into 12 pieces and form into 1- to 1 ½-inch balls. Cut two pieces of plastic wrap large enough to cover a plate of 6 to 7 inches in diameter. If you have a tortilla press, place a sheet of the plastic wrap on the opened press and position a dough ball on the plastic. Place the second sheet of plastic on the dough ball and close the top plate and apply pressure with the handle. (In the absence of a tortilla press, place a small plate on top of the dough ball covered by plastic and press the plate firmly to flatten the dough ball.)

Open the press, remove the top sheet of plastic and lift the tortilla using the edges of the remaining plastic. Holding the plastic side in your palm, gently remove tortilla and flip it onto a hot, ungreased griddle or pan. Cook tortilla on one side, 1 to 2 minutes, until edges begin to brown. Turn tortilla over and cook on other side.

Remove tortillas from griddle and set aside to keep warm in a covered dish or wrap in a towel. Best when served warm.