Hiroko Merante, of Cold Spring, passed away at home on May 4, 2015. Born in Tokyo, Japan, on August 31, 1934, she came to the United States in 1970 after meeting and marrying her husband, Anthony Merante, while he was stationed in Japan with the U.S. Navy. She was the daughter of Kinichi and Kuni Kikuchi. She became an American citizen in July 1976. 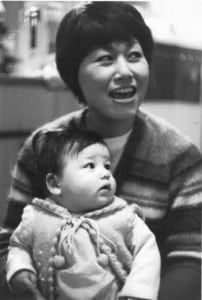 Hiroko Merante with her son Peter in 1970

She is survived by her husband, Anthony, of Cold Spring; two sons, Ryosuke and his wife Leehann (of Poughquag) and Peter and his wife Christine (of Fishers, Indiana); her sister Kazuko and her husband Kenneth Reckner, and her sister Masako Smith; her sister-in law, Laura Merante, her brothers-in-law John (Carolyn), of Cold Spring, and William (Diane) of Bullville, New York; and her pride and joy, her two grandsons—Aidan and Matthew Merante of Fishers, Indiana. To them she was their special “Obasan.”

Hiroko was a quiet woman of many talents. The entire Nelsonville neighborhood admired and benefitted from her gardening skills. She was a talented seamstress and a cook of both American and Japanese cuisine. She was a devout Buddhist and practiced until illness overtook her. She greatly enjoyed cheering her sons play on Haldane’s teams. A new love entered later in her life, her Cho Cho (a papillon whose name means “butterfly” in Japanese).

The family especially wants to acknowledge the immeasurable support and love given by Hiroko’s caregivers: Katty Agudo and her family (especially Kayle), Pam Jones, Lynda Ann Ewen, and the amazing aides and nurses from the Visiting Nurses’ Service and Hospice.

A memorial service for Hiroko will be held at 10 a.m. Saturday, May 9, at St. Mary’s Episcopal Church in Cold Spring, with reception to follow. Call Clinton Funeral Home for details at 845-265-3333.