An incident at the March 2014 Cold Spring election

The vast majority of defendants who appear at the Cold Spring Justice Court do not see their cases go to trial; Richard Weissbrod, however, is an exception. The Cold Spring resident faced a charge of harassment in the second degree at a bench trial before Judge Anthony Costello on Thursday, April 30. Putnam County Assistant District Attorney David Bishop prosecuted the case while Poughkeepsie-based attorney Steven Patterson represented Weissbrod.

The trial was a classic case of “he said, she said,” centered on Weissbrod’s behavior at the Cold Spring firehouse during the March 18, 2014, village election. The firehouse served as a polling station that day. Taking such case to trial is not without considerable cost. In court that day, in addition to Judge Costello and the two attorneys, were the court clerk, a court stenographer, four witnesses and two reporters.

Calls to Bishop and Patterson to determine what factors prevented such a relatively minor charge from being settled without the expense of a trial were not returned. Harassment in the second degree is classified as a “violation,” an offense considered less serious than a misdemeanor. The website newyork-defense-lawyer.com states: “Violations are not considered crimes. Although a violation carries a potential 15-day jail sentence, in almost all cases the punishment will be that of a fine and/or community service.” 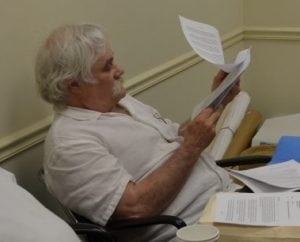 Weissbrod is accused of having harassed Nelsonville resident Bridget Villetto and her grandmother Joan Villetto at the firehouse polling station. The defendant was working as a poll watcher on behalf of Donald McDonald and Matt Francisco, who were both seeking election to the Village Board. Bridget Villetto, the principal victim of the alleged harassment, had taken her 85-year-old grandmother to the firehouse to vote but was not there to vote herself since she lives in Nelsonville. Joan Villetto recently passed away.

Harassment or freedom of speech?

In his opening remarks Bishop said that Weissbrod confronted the two women as they were about to leave the polling station, yelling at Bridget Villetto and refusing to stop when asked to do so. He said Weissbrod then followed the two women outside where he continued to yell at them as they walked down Church Street on the way to their car.

Patterson, on the other hand, contended in his opening statement that there was no proof “beyond a reasonable doubt” of anything that constituted harassment and that were two different versions regarding what happened that day. He acknowledged that a conversation had taken place between Weissbrod and Bridget Villetto but asserted that in America, while a conversation “can be annoying and upsetting, it doesn’t make it illegal.” He added that Weissbrod “didn’t curse … raise his voice … (or) intentionally harass anyone.”

Cold Spring resident Lillian Moser, who was working as a poll watcher on behalf of Michael Bowman and Cathryn Fadde, who were also seeking election to the Village Board, was the first witness for the prosecution. She testified that Weissbrod interrupted a conversation between herself and Bridget Villetto as she and her grandmother were preparing to leave the building. Moser said that Weissbrod approached Bridget Villetto and asked her, “Could you see Cold Spring from your porch in Nelsonville?”

She described Weissbrod’s demeanor as “rather harsh” and “rather blatant” and that he continued in what she described as “almost a rant” for close to five minutes, even after Bridget Villetto had asked him to stop. Moser said that in contrast, Bridget Villetto remained calm, telling Weissbrod that it “wasn’t the time or the place” for such a conversation. She further described Weissbrod’s tone as “loud, almost berating.” Moser said that Joan Villetto “seemed taken aback, almost shocked” by Weissbrod’s behavior. She testified that the conversation ended when an election worker intervened.

Bridget Villetto also testified, saying that she didn’t know Weissbrod and had never met him before the incident. She said that she did nothing to provoke the exchange with him but that he had approached her and asked if she was the Bridget Villetto who writes letters to the Putnam County News and Recorder. She said that he was agitated, yelled at her and described his body language as “aggressive,” and that the exchange left her grandmother “upset and shaking.” The incident, she said, had taken from 30 seconds to a minute.

Bridget Villetto went on to say that she and her grandmother then left the firehouse and started walking to her car, which was parked down the block on Church Street. At that point she said Weissbrod “came storming out of the firehouse,” approached her and “started yelling in my face” and that he was “visibly angry and agitated.” She said he continued to follow them down the sidewalk for about four minutes, yelling at her in the process.

She said Weissbrod told her she had no right to say the things she had written in the PCNR and also asked her if she had been charged with driving while intoxicated. When she asked him how he could know that, she said Weissbrod responded, “I have my ways,” a comment she described as “creepy.”

The defendant’s side of the story

Cross-examined by Patterson, Villetto repeated her story, saying that Weissbrod had called her a liar, screamed at her as she returned to her car and that she felt threatened. When he asked if he had physically threatened or cursed at her she replied, “No.”

Patterson twice asked Costello to dismiss the case for lack of evidence, but his motions were denied.

Marie Early, now a trustee on the Cold Spring Village Board, testified for the defense. She was working as a voting machine inspector at the polling station that Election Day. She said she did not witness a conversation between Weissbrod and Bridget Villetto inside the firehouse and that she had heard no yelling. She also testified that when she exited the firehouse onto Church Street to have a cigarette at about the time Weissbrod left the building, she saw no interaction between him and the Villettos.

Weissbrod took the stand in his own defense. He said that he did have a conversation with Bridget Villetto inside the firehouse but that he did not yell at her. He said that when he asked her if she was the person who had referred to Cold Spring residents as “stupid” in letters to the PCNR, she did not respond. He further testified that when the Villettos left the firehouse, he “had no idea where they went.”

Weissbrod added that when he stepped outside the firehouse, he met Michael Bowman, who asked him what had just happened inside. Weissbrod said he explained the situation to Bowman and then proceeded to walk north on Church Street. Bowman, who was elected as a village trustee that day, was listed as a witness for the prosecution but did not appear in court. Bishop said that he believed Bowman might have had difficulty getting time off work.

The defendant disputed Bridget Villetto’s testimony, saying that he did not follow them down the sidewalk and didn’t encounter them until he approached their car, some distance down Church Street. He said that Joan Villetto was already seated in the car and that Bridget Villetto was walking around to the driver’s side of the vehicle. Weissbrod said that he did engage in another conversation with Bridget Villetto, asking her if she had ever run a police roadblock, to which he said she responded, “No.”

Costello ordered Weissbrod to be in court on Wednesday, May 13, at 1 p.m., at which time he will render his verdict.