The New York State police are investigating the shooting death of a suspect by a City of Beacon police officer last evening (Thursday, May 7). The incident occurred on the westbound embankment off I-84 near exit 11 in Beacon.

Police said the white male suspect was shot after he brandished a large knife and threatened officers with it. 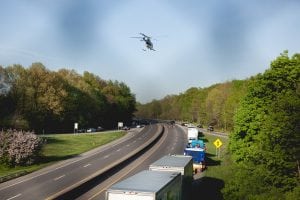 The shooting incident followed an earlier knifepoint car hijacking at approximately 3:30 p.m. by the suspect at Memorial Park in Beacon. With police in pursuit, the suspect abandoned the stolen vehicle on North Elm Street and proceeded on foot into a wooded area near the highway. He then crossed both the westbound and eastbound lanes of the highway before the police caught up with him.

I-84 in both directions was closed for the evening rush hour while police processed the scene for evidence. The closing caused traffic jams on area bridges and alternate roadways such as Route 9.

In a statement, the State Police said that Dutchess County District Attorney William Grady is directing the investigation overall. The Beacon Police Department is also involved.

The identity of the suspect was not revealed pending family notification according to police.