The fire inside an electrical transformer at the Indian Point nuclear power facility on Saturday (May 9), that at first seemed without serious consequences, now appears to have caused an oil leak of unknown quantity into the Hudson River.

Riverkeeper, the environmental advocacy organization pushing for closure of Indian Point, reported today that one of its river patrol boats had seen sheens of oil at several river locations north and south but particularly in the immediate vicinity of the plant. 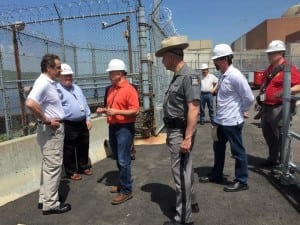 Gov. Cuomo, left, is briefed by NYSDEC Commissioner Joseph Martens at Indian Point after the May 9 incident (official photo).

Gov. Andrew Cuomo toured the facility in Buchanan, New York, and acknowledged the oil spill, which he reportedly said resulted from oil exceeding the capacity of a holding tank. The exact cause of the release of oil into the river and the amount are now also subjects of the fire investigation.

In a statement released by his office, Cuomo said: “Anything that happens at this plant obviously raises concerns. A transformer fire in and of itself was not dangerous, but the fear is always that one situation is going to trigger another, and again there has been a repetition in the number of transformer fires that have happened. The fire was started, they believed the fire had been put out; the heat from the transformer actually reignited, so the transformer went on fire a second time, and it had to be put out a second time.

“This plant is the nuclear plant that is closest to the most densely populated area on the globe. If something goes wrong here, it can go very wrong for a lot of people. So it’s always been a priority for us.”

Continuing, the governor said: “There is no doubt but that oil did escape from the transformer, there is no doubt that oil did go into the holding tank and exceeded the capacity of the holding tank, and there is no doubt that oil was discharged into the Hudson River. Exactly how much, we don’t know. That will be part of an ongoing investigation. DEC (Department of Environmental Conservation) was on site last night and we want to thank them very much for their expeditious service. We have booms in the water now around the discharged pipe to collect any oil that may be in the river. DEC is on site and DEC is also on the river, monitoring this situation.” 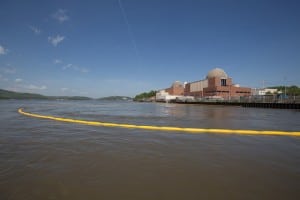 Cuomo also expressed concern about the amount of chemical fire retardant that ended up in the river. The governor is in favor of closing Indian Point, which is currently under review for an operating license renewal.

“This is a problem to be taken with the utmost seriousness,” said Riverkeeper President Paul Gallay. “Indian Point has a long, disturbing history of operational and environmental problems. The plant’s aging infrastructure has caught up to it and we must see that it is closed or these problems will only worsen with potentially catastrophic results.”

Entergy, the operator of the plant, had not issued a new statement on the status of conditions as of 5 p.m. Sunday.