It won’t be via telephone or text message or even through one of those newfangled but inevitably soon-to-be-obsolete technologies like Skype, but today’s Beaconites have been given the opportunity and ability to communicate with their counterparts of the future through the HELLO BEACON 2163 time capsule project created by artist Jill Reynolds. The unveiling of the capsule, which differs from the usual concept through both form and content, will take place this Saturday, May 16 — the day after Beacon’s 102nd anniversary, at 1:30 p.m. at Howland Public Library.

There, Beacon Mayor Randy Casale and City Councilpersons Peggy Ross and George Mansfield will join Reynolds in drawing the curtains open to view the collection of nearly 2,000 messages, handwritten by residents. They have been individually sealed and stored in mini test tubes and placed inside a large glass vessel, designated to be opened in 2163, and are on display at Howland Library, unburied, until that time. 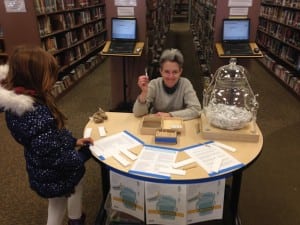 Time Capsule creator Jill Reynolds solicited messages from all over Beacon over a course of months; here she is pictured at Howland Library, where the capsule will reside until 2163, when it is opened.

Reynolds, a flamework glass artist, first proposed the idea as part of the Beacon Centennial celebrations two years ago but suggested it a little too late for it to take place. She declares herself interested in “artifacts, history, memory — and the future. This gives people now another layer, a reason to think about the future.”

When crafting the parameters of the project, Reynolds recalled her grandfather, born in 1892, recounting his mother’s story of seeing Lincoln’s funeral train going through Chicago when she was a little girl. Considering ways to make history more tangible, Reynolds seized upon 150 years as an appropriate benchmark, noting that if the average lifespan is 75 to 80 years, then 150 is about two lifetimes, “so for kids now, their great-great-grandchild would ‘know’ somebody who put a message in the capsule.”

Using glass as the material for the time capsule is also significant for Reynolds. “I chose glass with the hope that the visibility of the messages and the vulnerability of the material will inspire careful guardianship,” she said.

Reynolds created a similar project on a much larger scale in the year 2000, in Tacoma, Washington. Working on a commission, she made a glass capsule donated by Corning designed to last 1,000 years, all the while withstanding possible earthquakes and volcanic lava flows from the nearby mountains there. For this project, Reynolds’ proposal was selected to receive support from Arts Mid-Hudson, with funds made available through the Decentralization Program of the New York State Council on the Arts. 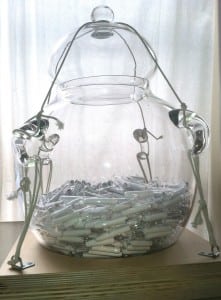 The time capsule, filling up with messages in glass tubes, to be displayed at Howland Library and opened up in 2163

The collection of messages for HELLO BEACON 2163 began at last September’s Spirit of Beacon Day, Pumpkin Day, numerous farmers market Sundays, at the auto show, the Open to the Sky Sukkot, on the street during Second Saturdays, continuing through the end of 2014. There were also six collection points around town. The concept was simple: Interested participants (who ranged in age from small children to the elderly) were asked to write down a message about Beacon or their life in Beacon, to be read by someone 150 years from now. Suggestions were offered — anything from “Describe a contemporary fad” to “What’s your favorite place in nature?” — but anything was fair game. Adding name and age was optional.

Participants were provided with special slips of acid-free paper and a souvenir pencil. Reynolds said that “99 percent of people wrote theirs then and there, on the spot, but some deliberated for some time before determining what to write, and others erased and rewrote, sometimes asking for new sheets, wanting to get it just right.” Many people read their messages aloud to Reynolds, who said that they seemed to be divided into three subcategories: wishes for the future, sometimes cautionary, i.e., “I hope that Beacon isn’t underwater”; apologies in the vein of “Sorry we messed things up”; and descriptions of life here and their favorite things about it.

The messages were each carefully rolled up and inserted into glass test tubes made by Reynolds her husband and fellow glass artist, Daniel Spitzer, before each tube was sealed. The large (five-gallon) glass container in which they will reside until 2163 was blown by Spitzer, who was a member of famed Seattle glass designer Dale Chihuly’s studio in Seattle for a decade — and others at Urban Glass, a public access studio in Brooklyn. The lid for the container was made at Hudson Beach Glass, which also provided the sandblasting and stencil markings labeling the contents. 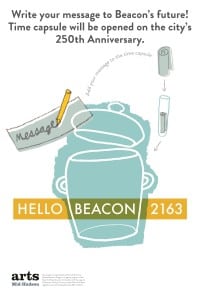 An invitation to speak to those living 150 years from now: a sign for the HELLO BEACON 2163 time capsule

Reynolds and Spitzer, under their company name of Ten Willow Studio, specialize in museum-quality glassworks used in architectural installations, as well as light fixtures and sculptures for use in private homes. Recently, they began creating a line of very lightweight, uniquely shaped glassware, “Malfatti,” produced from borosilicate glass.

Soon, the container, along with a newly-created pedestal to hold it, will make its way to Howland Library, where, rather than being buried and forgotten, it will be publicly displayed, next to portrait busts made by Giovanni Benzoni of General Howland and his wife, giving this link to the future another one to the past. The public is invited to the opening and can view the capsule, well, any old time — as it will be in residence in that very spot until 2163.