Dam-building beavers gnawed their way onto the Cold Spring Village Board agenda Tuesday night (May 12), joining trees, questionable signs, the governmental role in maintaining private streets and numerous other items that demand attention.

Convened at Village Hall for its formal monthly meeting, the board also got an almost-year-end financial update that showed revenues exceeding expenditures by $207,219 so far for fiscal 2014–15, which concludes May 31. As of April 30, the village had spent $1,628,931 of its $2,730,190 budget. It had received $1,836,150 in revenue, according to a financial spreadsheet provided in the meeting materials.

In other activity, the board appointed former Mayor Anthony Phillips as chairman of the Parking Committee and Ruth Elwell as a member of the Code Update Committee. It postponed action on two agenda items, involving a request for proposals for consultant services and a separate grant-related agreement. “Both are not ready for Village Board review,” Trustee Marie Early announced.

Covering Water Department developments, Greg Phillips, the water and wastewater superintendent, told the board that “we have dam issue on Fishkill Road. We have a beaver problem.” Phillips said the beavers had constructed a dam on Foundry Brook near the water treatment plant. “What you take out one day, they put back. It’s hilarious,” but frustrating, since the animals’ chosen location hinders easy access by equipment, he said. Sounding determined to have human ingenuity outwit beaver obstinacy and industriousness, Phillips said the Water Department pursues a solution. The brook carries water to the treatment plant from the village’s uppermost reservoirs.

If the beavers represented bad news, a device called an Aquascope brought good news, of a sort. Phillips said that the Aquascope, an underground microphone, recently allowed the department to detect and fix two water system leaks. Before the discovery and repairs, daily water-flow averaged 334,000 gallons; afterward, it fell to an average of 284,000 gallons a day, thereby saving 50,000 gallons every 24 hours, according to Phillips. “That’s significant,” he observed. 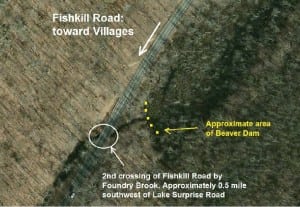 A map created by the Cold Spring Water Department shows the general site of the beaver dam on Foundry Brook.

Phillips likewise briefly discussed the unexpected tapping into a water hydrant in Nelsonville. To wash down its streets, the Village of Nelsonville hired a contractor, who opened the hydrant on Tuesday, using the water stream for the cleanup. Tinkering with the hydrant stirred up the system and caused discoloration in tap water, Phillips explained, adding that he had spoken with Nelsonville Mayor Tom Corless about the incident. “We’ll make sure it doesn’t happen again,” he assured the board.

Tree Advisory Board Chairperson Jennifer Zwarich provided a draft set of goals for a village tree management plan, which her group is preparing. They include:

“It’s a lot of work but we’re happy to do it,” she said of her board’s efforts in developing the tree management plan.

Building Inspector Bill Bujarski raised issues related to signs, citing a proliferation of commercial sandwich boards as one concern and neon signs on Main Street, part of the village’s Historic District, as another. “All of a sudden we have an abundance of neon on Main Street,” Bujarski said. “That is absolutely not permitted.” To address the clutter of sidewalk sandwich boards advertising businesses, he recommended more clarity in the Village Code. “It’s unclear under the law, especially without a good sign ordinance, how we could deal with it,” he said.

Trustee Cathryn Fadde wondered about the level of funding remaining from approximately $1 million in grant funding for the Main Street improvement project, pending since 2005, involving street, sidewalk and lighting upgrades. Efforts to date have focused on design work and limited public outreach (for example, a 2012 forum at the Cold Spring firehouse on a design scheme).

“Are we done with the designing, because we don’t have a lot of money [left]?” Fadde asked.

Early, who became a trustee in April, has been reviewing aspects of the project. She responded that the design stage often consumes 20 percent of the money on such infrastructure projects. “We believe there are sufficient funds left for construction,” she said.

That caught the attention of Trustee Michael Bowman. “Aren’t those private roads?” he asked.

Early told him that the two streets are indeed privately owned and that she understands that the village has provided an annual “scraping” for some time.

Private streets or roads belong to property owners with lands bordering them, not to a municipality such as the village. Cold Spring contains several private streets; at least some receive varying degrees of public services, such as garbage pickup and road maintenance.