Inveterate travelers Marnie Henricksson and her former husband spent years roaming in Japan and Southeast Asia. Using a six-tatami-mat apartment “in a small town a subway ride outside of Tokyo” as a base, Henricksson spent a year there teaching English as a means of supporting her wanderlust. It was there, in a tiny space equipped with little more than a hot pot and a rice cooker, that Henricksson discovered the “fabulous markets, from which I learned to cook. I’m from Minnesota,” she said, “and I grew up with canned vegetables and that whole era, so this was just amazing to me.”

Cut to decades later, and Henricksson, who, along the way, opened and ran a very successful pan-Asian restaurant in New York City and, more recently, the revered but short-lived Marnie’s Kitchen just off the Taconic in Putnam Valley, is feeling that urge to cook again. She has just established “Marnie’s Asian Kitchen to Go” at Cold Spring’s St. Mary’s Episcopal Church Parish Hall, as kind of a regular pop-up, open Tuesday and Wednesday evenings from 5 to 8 p.m. with a changing selection of Henricksson’s home-cooked Asian meals. 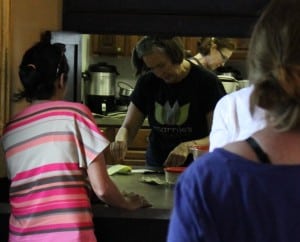 By 5:30 p.m on opening day, the line at Marnie’s Asian Kitchen to Go was already forming.

“The food is my take on these dishes, not completely authentic, but my style of fresh Asian food, in a friendly little place,” Henricksson said. She added that she uses “lots of citrus: lemon and lime juice, garlic and ingredients, for example collards, not typically found in Asian kitchens, but fresh and available here.”

It’s very much a work in progress due to the newness of the concept and execution. Henricksson intends to offer four dishes each week (the same menu will apply to both Tuesdays and Wednesdays but will change weekly): three entrées and one vegetable, derived from Chinese, Thai, Burmese, Filipino, Japanese, Malaysian and Indian cuisines. Usually, one of the entrées will be a stir-fry and another something “assembled.” The first selections will be tried and true favorites from her restaurants.

Mary’s opened for the first time Tuesday, May 12; the initial offerings included sesame noodles with chicken breast, cucumber and snap peas for $10, or vegetables-only for $8; a Thai beef salad for $10, without beef $5; a Southeast Asian sauté of wheat noodles stir-fried with shrimp or chicken breast and spinach in a coconut milk, lemongrass, ginger, and garlic sauce for $10, vegetables only $8; and sautéed collard greens with garlic and Chinese sausage for $5. A side of jasmine rice cost $3. Henricksson will post each week’s menu and prices on Sunday evenings via Facebook, Twitter and Instagram or send them to those interested by email (add your email address at [email protected] if interested).

To keep the packaging waste to a minimum, there will be reusable containers for those who want to wash them and bring them back for the next refill. The rest of the containers will be recycled paper ones. There will be no plastic utensils, just wooden chopsticks. 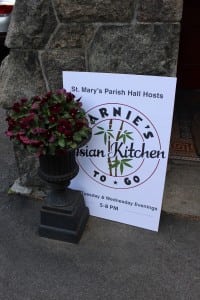 The signboard outside of St. Mary’s Parish Hall alerts fans of Asian food to the arrival of Marnie’s Asian Kitchen to Go.

After returning from her long stint in Asia, Henricksson took a giant step, with zero background in the restaurant business, by nevertheless opening one. “I was always interested in small businesses — that’s my thing — and it all came together when we took that long trip. I came back and simply thought, ‘I wonder if we can open a restaurant?’”

Soon thereafter, Marnie’s Noodle Shop opened in Greenwich Village. “I was a nobody on the food scene,” she recalled, “and for some reason just two weeks after we opened I got a full-page review in New York magazine; it was craziness. A month after that we got highlighted in the ‘$25 and Under’ section of the New York Times. After that I got as much business as I could possibly handle, and never paid a dollar for advertising!” Henricksson recalled.

Marnie’s Noodle Shop opened in 1991 and closed in 1998, when Henricksson, her then-husband and two daughters decamped to the country, moving to Putnam Valley and then overseas to Europe before returning to Putnam Valley. She wrote a cookbook, Everyday Asian, and tried restaurant-running again, opening Marnie’s Asian Kitchen on Pudding Street, just off the Taconic. Although the food was praised, the location proved tricky with no chance to place signs along the Taconic; and before the advent of social media to promote it, there just wasn’t enough traffic. The restaurant had a strong corps of local devotees, but, as it was also quite physically taxing, with Henricksson doing everything herself; she closed it and moved to Cold Spring about a year ago.

After her younger daughter left for college last year, Henricksson realized she had “no one left to cook for” and she missed it. Figuring out how to do so, without the pressures of running a restaurant, took some time, and she considered a number of options, including renting space at local restaurants that might be closed at night, before finding the space at St. Mary’s.

“They’ve been so receptive to my coming in,” she said, “and are open to my inventing a way for this to be — getting my food to those who like the way I cook.” Henricksson knows there will be some trial and error at the beginning: “It’s all about the right amount of food. Ideally eventually there will be preorders, which will let me calculate how much to bring, and we may run out of stuff during the first few weeks, but I think after about six weeks we will have the flow and it will be great. For me, at this stage of life I’m at, I want it to be fun.” To add to the fun component, Henricksson’s two daughters will be helping her out during the first few weeks. 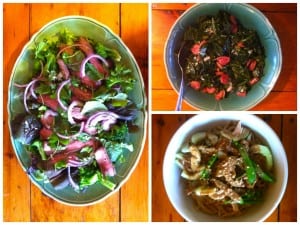 The day Marnie’s first started serving, a note appeared on Facebook explaining what ensued: “I am overwhelmed by the incredible response we got for our opening day. We sold the food for two days in just a few hours! Consequently, we won’t be open tomorrow but I now know how to prepare for next week. Thank you so much for your support and patience. I’ll post again soon to let you know about preordering starting next week.”