A bizarre one-car accident occurred on Main Street in Cold Spring just after 10:30 a.m. on Tuesday, May 19. A Kemble Avenue resident, who asked not to be named, saw a silver Honda Fit pull out of the parking lot behind 125 Main St. The witness said that as the car exited the lot onto Kemble, it struck a large rock with enough force to push it out onto the sidewalk. The vehicle then turned east onto Main Street and almost immediately veered to the right, smashing loudly into a car parked in front of A Twist of Fate Salon. 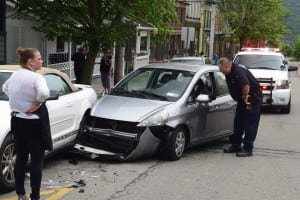 CSPD Officer Ed Boulanger speaks with the driver of a car that smashed into a vehicle parked on Main Street on Tuesday morning. Sharon Tiffany, owner of the car that was struck, looks on.

The car that was hit, a Ford Mustang, belonged to the salon’s owner, Sharon Tiffany. Cold Spring Police Officer Ed Boulanger soon arrived on the scene and spoke to the male driver, who had remained seated in his car, for several minutes. Boulanger then had the driver get out of his vehicle, searched him, and put him in handcuffs before escorting him to the police cruiser. The driver did not seem to be injured and received no medical attention at the scene.

Boulanger also searched the car and removed a number of items, including what appeared to be at least one prescription medicine bottle. The driver’s vehicle was later towed away. Tiffany said that police advised her not to drive her car due to the extent of damage and it was subsequently towed away as well. The police declined to identify the driver of the car. He remained in custody at the Cold Spring Police Station as of 4 p.m. Tuesday.

Update, May 23: Cold Spring Police identified the driver as Christopher Giglio, 43, of Cold Spring, who was charged with operating a vehicle while impaired by drugs. He is scheduled to appear in Cold Spring Justice Court on June 6.