The high school sociology elective at Haldane tackles many of today’s concerns head-on. With units on gender, socioeconomic status, racism, family and children, social norms and sociological theory, the class presents students with real-life topics and allows them to reach into and beyond their own experience as they discuss and debate what shapes contemporary life in this country.

The class, taught by social studies teacher Melissa Seideman, who also teaches the core 12th-grade government classes, is offered to juniors and seniors as part of the Dutchess Community College (DCC) accredited program in which high school students can receive college credit for classes taught at Haldane that have been vetted and approved by DCC. 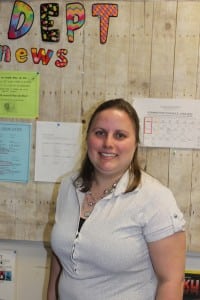 The sociology class is only in its second year, and new elements continue to be added to it. This spring, the students went on a field trip to the Green Haven Correctional Facility, located in Dutchess County, a trip the majority of students called “life-changing” according to Seideman. Hearing about a “Youth Assistance Program” offered there from a colleague in another school district, Seideman said the program, which is in the “Scared Straight” vein, is generally presented to at-risk students but was tailored a little differently to this group.

For junior Alex Gariepy, it felt transformational. “It made me realize that just because people do bad things doesn’t mean they’re bad people. So many were remorseful. It changed my perspective on prisons and was completely eye-opening.”

The culminating activity of this semester-long class is what Seideman has dubbed the “Sociology Passion Project,” which encourages students to pursue a creative interest they would otherwise not experience academically.

Throughout the school year the students are expected to use 20 percent of their dedicated time, either in or out of class hours, devoted to the project. After brainstorming, they are asked to come up with an essential question inspired by “their” sociological topic. They have to submit a project proposal, pitch it to the class and then write blog posts on their progress, addressing the connections made to texts, values and experiences, the challenges faced and conclusions drawn during the process. By May, they are expected to have completed their project and then must share it, in a 10-minute “TED-style” presentation.

Seideman said some “run with the idea, some get stuck. It’s an action project, and a really open one, which is difficult for some kids — they want me to tell them what to do, but I want them to take ownership of it.” Others have embraced the openness, producing projects on diverse subjects, including one comparing musical preferences to personality type, another comparing racism from both Cold Spring and New York City perspectives and a third analyzing learning strategies from elementary teacher observations.

Sociology student Katie Phillips came up with her idea, “Outrun Autism,” a 5K run/walk benefiting the Autism Speaks Foundation, which she has organized from start to finish, assisted by three other students, Gariepy, Anna Campbell Birn and Melissa Tringali, based on her own experiences and passions. “I love running and helping the community,” she said. “My mom [Tricia Phillips] worked with special needs children at Haldane and I used to visit the classroom a lot. I decided to focus on that and researched and found the Autism Speaks organization. Being on the track team, I thought, ‘Why not involve the high school and town to do a 5K in support? … I chose a 5K and made it a run/walk race so everyone can participate; the distance is easy on a small campus, and we wanted to hold the entire race on the campus itself.” 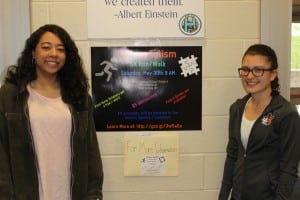 Phillips said the first step was “finding a solid foundation that everyone could trust.” She then had to pursue all the necessary permissions from the school district, get it put on the calendar, reserve a field, etc. Between them, the four students have organized publicity, solicited sponsorships as well as food and drink donations (including a large one from Cold Spring Pizza), established a Facebook events page to which nearly 500 students and community members have been invited, and dealt with all the other components needed to run a successful charity event.

As to how this race connects with the sociology curriculum, Phillips is clear: “We’ve learned about social problems and how some are pushed away from society and hidden. When I was in middle school, even through helping in the special ed room I was made fun of. I want to help it not be made fun of. I have friends who have siblings with autism and also I’ve volunteered at the Therapeutic Equestrian Center working with special needs people and I just wanted to do something for them. It’s a way for me to leave my mark as a senior and help a huge cause and get awareness.”

For Gariepy, another organizer, awareness is critical. “People are more aware when it comes to physical needs rather than mental.

People with autism have the most struggles because they don’t fit in with their peers.” Gariepy had originally thought of doing a documentary film on either autism or racism as her project, but “then Katie came up with this and it seemed perfect.” 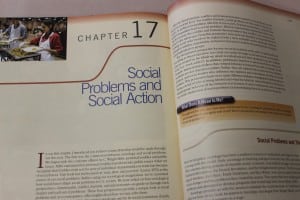 ‘Social Problems and Social Action,’ shown in this textbook, are at the core of Haldane’s sociology class.

Outrun Autism will take place at 9 a.m. Saturday, May 30, at the Haldane turf field on Route 9D and Craigside Drive. All community members are welcome. There is a $5 admission charge, payable on the day, and food and drinks will be available. The first three finishers even get a free T-shirt.

Both Phillips and Gariepy have loved the sociology class. Gariepy said: “We judge each other too harshly, as a society. We could be much more open, accepting.” Phillips intends on double majoring in international relations and sociology next year at college.

For Seideman, this reaction is rewarding since she really enjoys teaching the class. “I love the mix of students I get in it, from the exceptional AP students to those struggling with academics and in and out of school. This results in such different perspectives, which is what it is all about.